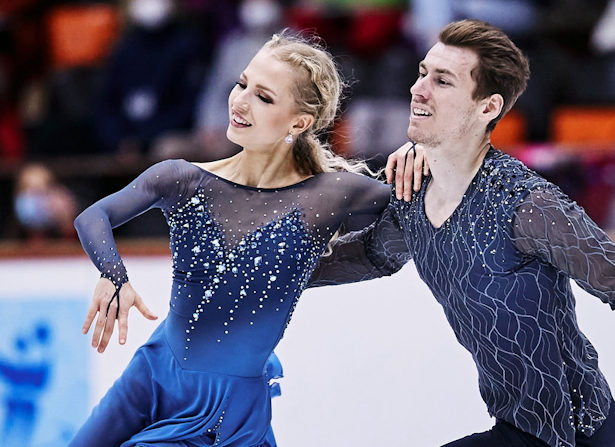 Juulia Turkkila and Matthias Versluis of Finland claimed gold at 2021 Nebelhorn Trophy on Saturday in Oberstdorf, Germany, earning a spot for Finland for the Olympic Winter Games. Germans Katharina Mueller and Tim Dieck moved up from fourth to take the silver medal, but they were not in the running for an Olympic spot. The bronze went to Maria Kazakova and Georgy Reviya who secured a spot for Georgia. Armenia’s Tina Garabedian and Simon Proulx-Senecal, who were unable to compete at the World Figure Skating Championships in March (due to a possibly false-positive Covid-test) and Natalie Taschlerova and Filip Taschler of the Czech Republic picked up the remaining two spots.

Turkkila and Versluis had not made the Final at Worlds due to an error in the Rhythm Dance, but have now proved that this was a fluke. The Finns led following their Rhythm Dance to “Breathe You In My Dreams” by Trixie Whitley and “River” by Bishop Briggs. The Finnish Champions delivered a nice Free Dance set to “Wild Side” by Roberto Cacciapaglia and “Bruises” by Lewis Capaldi that included a combination lift, well-synchronized twizzles and a straight line lift that all were awarded a level four. They earned 173.74 points.

“After the disappointment at Worlds last season, we’ve worked really hard,” Versluis shared. “Arriving at this competition was less stressful because of the good work we had done in the summer.”

Mueller and Dieck only received the base level for their Midnight Blues pattern dance in the Rhythm Dance, but they collected a level four for five elements in the Free Dance to The Bodyguard soundtrack. The Germans pulled up two spots with a total score of 173.74 points.

“This was a very good start into the season, our best ever,” Dieck said. “It is always special to win a medal in Germany.”

“We were not competing for an Olympic spot here, but it was important to us for our national qualification and to prove that we are ready and want to go to the Olympic Games,” Mueller added. “We did a very good job with the two programs, but there is still a lot to improve.”

Kazakova and Reviya ranked fifth in the Rhythm Dance after he wobbled on the twizzles. The 2020 World Junior silver medalists then put out a strong Free Dance to “Dummy” by Charlie Clouser, “Texas Gypsy Massacre” and “Mephisto’s Lullaby” by Xtortion Audio and came second in the segment. Overall, they pulled up to third at 173.20 points.

“We are glad to have earned a quota place for the Georgian team,” said Reviya. “We felt the pressure of the responsibility, but we were able to overcome all difficulties. We fulfilled the minimum task of qualifying for the Olympic Games. Now we’ll continue to work and improve our skating to show different, much better performances at the Olympic Games.”

Garabedian and Proulx Senecal sat in second following the Rhythm Dance. They also skated well in the Free Dance to “Autumn Leaves” and “Luck Be a Lady,” but dropped to fourth (173.03).

The Czech brother-and-sister team Taschlerova and Taschler slipped from third to fifth with their Tango Free Dance as he struggled with the twizzles (172.98 points).