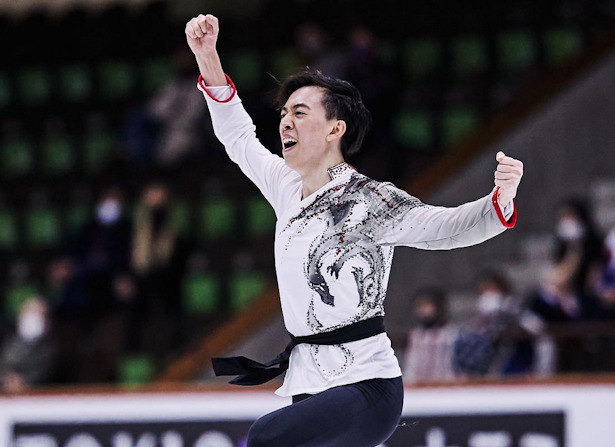 Vincent Zhou of the USA came out strong at the 2021 Nebelhorn Trophy in Oberstdorf, Germany, on Friday to secure a third Olympic quota place for the U.S. men by winning the qualifier event with 40 points to spare. Six more men were able to earn an Olympic spot for their country: silver medalist Adam Siao Him Fa of France, bronze medalist Russia’s Mark Kondratiuk, Sihyeong Lee of  South Korea, Vladimir Litvintsev, Azerbaijan, Australia’s Brendan Kerry and Roman Sadovsky of Canada. Overall, 25 Men competed for the seven available spots and many struggled with their nerves.

Zhou put himself in a good position by winning the Short Program to “Vincent.” He went for four quads in his popular martial arts-inspired Free Skate to music from the Crouching Tiger, Hidden Dragon soundtrack. The opening quad Lutz was impressive, but the American received a “q” – a slight underrotation – for the two quad Salchows and both triple Axels. Nevertheless, he scored 186.88 points and racked up 284.23 points.

“That was really fun to perform having worked very hard on the performance overall,” Zhou said. “Not just skating end to end to make jumps, but making everything high quality. I’m really happy to be able to perform like that and finally have a really good crowd. I am very grateful to have won an Olympic spot for the USA.”

Skating to music by Daft Punk, Siao Him Fa stumbled on his first quad toe but recovered to hit a triple Axel, quad Salchow and quad toe-double toe. However, the Frenchman fell on a triple Lutz and a triple flip. The 2021 Lombardia Trophy silver medalist remained in second place at 243.78 points.

“It was very stressful for me, but I am very happy about my performance today. Bringing a second spot for France is really great for me,” Siao Him Fa commented. “I think I have to work a lot more for the next competition.”

Kondratiuk was ranked fifth in the Short as his quad Salchow and toeloop were somewhat shaky. The 18-year-old stepped out of his opening quad toe, but landed a triple Axel and quad Salchow-Euler-triple Salchow in his routine to music from Jesus Christ Superstar. He underrotated the third quad which was another Salchow. The Muscovite pulled up to third at 241.06 points.

“It was an honor that I was selected to secure the spot, but it was a bit nerve-wrecking,” admitted the Russian national bronze medalist. “I did not want to let the country down. I tried not to think of the pressure too much, but it was on the back of my mind.”

Gabriele Frangipani of Italy finished fourth (229.39 points), but he was not in the running for an Olympic quota place. He missed a quad Salchow and a triple Axel.

Litvintsev’s program included a strong quad toe-triple toe combination, but he crashed on a triple flip and popped the second planned quad into a double. He finished sixth (228.65).

Kerry made some errors as well and dropped from third to seventh (218.95), but it was enough to get a spot.

I didn’t think it would be as hard as it was today,” said the Canadian Champion. “Just mentally, I thought it would be better. My training was really good, my practices and warm up were excellent. But the moment the music is turned on, it changes, it is different.”