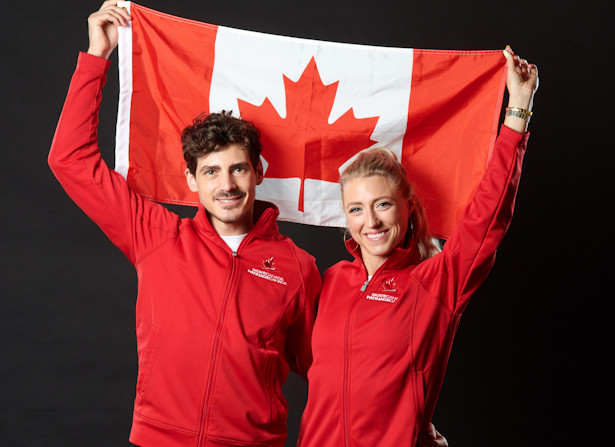 Like many other skaters, Canadian ice dancers Piper Gilles and Paul Poirier were hit hard by the COVID-19 restrictions. The team from Ontario were only able to compete live once last season – at the ISU World Figure Skating Championships in Stockholm, Sweden, where they captured bronze.

Today, the Canadian Champions will debut their new programs at the Autumn Classic International. Their Rhythm Dance is set to “I Guess That’s Why They Call It the Blues” and “I’m Still Standing” by Elton John.

“The short dance has been a fun option,” said Gilles. “Paul and I really enjoyed the last time we were able to do this hip-hop, disco, midnight blues year. I think for this year, where we wanted to keep that energy up, I think picking the right music was hard in a sense just knowing exactly what would suit us.”

The 2020 Four Continents silver medalist felt that the first song was very fitting for the Midnight Blues. They wanted to have a really iconic Elton John finish.

“We felt like having a wham-bam finish with “I’m still standing” was the perfect way to end the program,” Gilles explained. “That’s been a fun program to kind of put together, but I really think it shows our personalities and I think the two of us are just really excited to get that audience energy going behind us. I think we’re super pumped for the costume, which is going to be very Elton John as it should be, but I think it’ll be a very people-pleasing season for everyone for the short dance.”

For the Free Dance, the World bronze medalists opted for Paul McCartney’s song “Long and Winding Road,” but not the original version. They worked with the artists of the band GOVARDO that did the music for their “Vincent” program to establish a piece that would suit them.

“It’s all made for us, made for the story we want to tell,” noted Poirier. “I think the program is really about the road that brought us to this Olympic moment and our story. I think it is a very personal program for the two of us.”

The skaters were looking for a program that felt very “Olympic”, as they put it, and felt that the artists absolutely delivered.

“I think we’re really excited to share this program, but also to share this piece of music that no one has heard before,” said Poirier. “So it should be a really nice surprise. They were such a joy to work with last time and so willing to make sure the music was exactly what we needed it to be; to create the program we wanted to create, and the process was the same this time. There’s been just months of going back and forth, and changing little things, and adding little symbols. I don’t know what to make it sound exactly the way we want it to be.”

The skaters are excited to compete again after having only one live competition at Worlds in the past season. It was tough, but nevertheless, the season ended on a high note for the team.

“For everyone, that last season was a very strange one and one that none of us could have ever predicted, but I felt within all of that, we made something so beautiful and remarkable,” Gilles said. “We didn’t let all of the unknown take away what we wanted to accomplish that season, because the season before, we did accomplish quite a few things. We didn’t want to let go of that momentum of creating programs that people wanted to remember for a long time. Throughout the Covid season, we never let go of that drive and that energy to keep being better.”

The team admitted, however, that it was not always easy to keep the motivation. The biggest challenge came when 2020 Skate Canada was cancelled after the 2019 Worlds were cancelled where both skaters were scheduled to compete.

“I think that’s when things started getting mentally the most difficult for us,” recalled Poirier. From that point on, as we went through the season, we didn’t want to get our hopes up because we didn’t want to be disappointed again. Finding the motivation to train, when you weren’t sure if the competition was actually going to happen, and when the last three competitions had already been cancelled, required a little bit of mental gymnastics.”

The skaters had to sit down before the 2020 World Championships and make the decision that they want to participate at the event. It was difficult for them to train as if everything was normal not knowing if the event would take place. Like others in the same boat, this made training difficult. However, they pushed through and not only competed, but earned their first World medal.

“We were both ecstatic because it just felt like every year we produced these beautiful programs and we were just hoping that we would get the recognition and the results that we’ve been hoping for. I think we almost to an extent tried too hard for that,” Gilles pointed out. “I think that caused a lot of some of the mistakes that we had made over the years. We were just ‘us’ when we came out and skated (in Stockholm) and when we got that medal position, we were just over the moon.”

Poirier agreed: “We’ve been skating our entire lives, and these are the kinds of things you dream of when you’re a little kid. So to feel like you’ve been so close for so long and to finally get there is just such a great feeling. This is something that we’ve accomplished together and that just makes it so much better as well.”

Following the 2021 World Championships, the Canadian Champions stayed home as they were not able to travel for holidays or to take part in shows. They used the time to focus for the 2021-22 season and develop their new programs.

“Often what we do is we build a working skeleton for the programs and then we go back and change the things that we don’t like,” said Poirier. “And this time we really took the time to make sure we got it right the first time around. Of course, there will still be some adjustments throughout the season as we get feedback, but I think the choreography process and the creation process this year took a very long time. We kind of had a rule where all four of us (coaches Carol Lane, Juris Razguljaevs and the skaters) had to be happy with it before we could move on to the next thing.”

“We really demanded a lot of ourselves through the choreographic process,” he added. “I think we’re so excited for the season to start now! We’re so excited about our programs this year. I think they really speak to who we are and I think that’s what we’ve been trying to do through this whole Olympic quadrennial — creating programs that tell the story of who we are. I’m just really excited about the season.”

While the Canadians enter the season as World medalists, they don’t feel that their approach has changed. They acknowledge that the international ice dance field is strong.

“I think there are a lot of teams that could potentially be on the podium, including ourselves, and that’s really been our goal since the last Olympics,” Poirier said. “We know what we did last season got us the result that we wanted and I think we have a really good working plan. We know what in terms of competitions and preparation works best for us. I think what’s going to be the most important thing is, first of all, to skate well on the day at the games. I think even more importantly, is to have the pieces that people really believe in and get behind. That’s what we really wanted to make sure that we had with both of our programs this season.”

Now it is about training the right way, not getting distracted and staying healthy. The team knows what works for them and they trust in each other and take full ownership of what they do.

There was some time off during the summer and Gilles posted a fun video clip with her and her dog Scout, a Golden Doodle, jumping off a dock at the same time.

“It was one of those just really random things,” she said. “My dog had just recently figured out how to jump off the dock at the cottage.” Gilles had tossed a ball into the water, but the dog wouldn’t go and get it at first, but when the skater jumped into the lake, the dog jumped at the same time. A friend captured that moment on video. “It was a total accident, but you know, a dog can be trained to do anything and so who knows a synchronized dog and human event could be the next Olympic event and I would happily watch that any day!” Gilles said, laughing.

Poirier, meanwhile, got into the news as he talked about being a queer athlete for the first time in an interview for “Glory” magazine.

“Everyone is very positive and supportive,” he said. “I’ve been out in my own personal life for a very long time. I think as more and more athletes are taking a larger activism roll, whether it’s about different sorts of human rights, mental health, personal experiences, I think so many athletes are being so strong and really reminding the public and reminding people that we’re human. I’ve been very inspired by this movement that is happening throughout sport with so many athletes. So really, for me, this was just an opportunity to be a part of that conversation as well and hopefully have a positive impact on younger athletes.”

The ice dancer does not feel that he had to do programs he would have preferred not to do in order to fit stereotypes or expectations of others.

“If I think back on my entire career, I think I’ve been very lucky to be working with Carol and with Piper,” he shared. “I think Piper and I, over the course of our partnership, gained a lot of clarity on who we are as a couple. What’s important is that we as a partnership find our identity together. I think this kind of whole story of doing the programs for the people has been something that’s been very important to us, where we’ve been able to possibly take our personal experiences and bring them to emoting in the program. But I think ultimately, the choice of the programs is really about us as a partnership and who we are and what we want to put out in the world. I think what we’ve been able to do so successfully is to always share our joy for skating.”