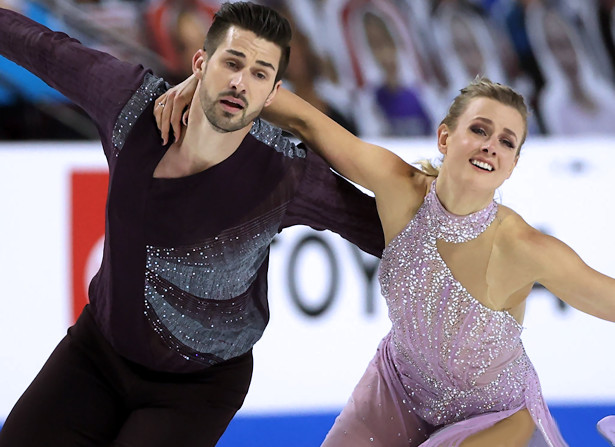 Hubbell and Donohue were spot on in their routine to “Drowning” by Anne Sila. The two-time world silver medalists garnered many positive grades of execution (GOE) for all elements, particularly the straightline-rotational lift, one-foot steps and twizzles. The circular steps were graded a level two, but all lifts, twizzles, and combination spin were awarded a level four. The finished first in the free dance (125.96) and overall (209.54).

“I couldn’t really be happier during the performance today,” said Hubbell. “Some days you take inspiration from different things whether it be the work you put in at home, or my mom in the stands; all those little motivations. But something clicked this morning and I really felt great in practice and had that feeling to skate for myself and really be there with Zach and be present. I think we accomplished that goal and in doing so, also we accomplished the other goal which was to get the gold so I am very happy!”

When asked about their “rivalry” with Chock and Bates, Hubbell said it was “funny to hear it described as rivals.”

“I think both teams are open and honest people,” she said. “We don’t try to play games or intimidate each other or anything like that. From that respect comes inspiration and motivation to get ourselves in gear. It’s no different this season. It’s usually very close. We know that when they skate their best, we also have to skate our best.”

“When we knew they were going to be at Skate America, we made that assumption that we would have to be in amazing shape, so we did everything we did at home to feel like we were prepared for this challenge,” she added. “They definitely laid it out there. We know them well enough that when they finished their performance, I walked through the curtains and saw Evan’s mom giving him a standing ovation so I could tell they had skated very well. We expect it to be close.”

Hubbell and Donohue, who will compete next at the Grand Prix in Italy, have no expectations for the rest of the season.

“There is no way to predict,” observed Donohue. “We have seen titans falls, we have seen little mistakes happen, we have seen teams who are at their first competition blow people away. This is such a beautiful fantastic sport for that reason and so I don’t want to put that expectation out there. We know what our goals are and know what we are pushing toward and we are going to keep pushing. We want to really take everything in and be so mindful and present to everything we are experiencing.”

Chock and Bates skated an intriguing space-themed routine to music by Daft Punk which opened with an interesting straightline-rotational lift followed by very good twizzles. The diagonal steps were graded a level three and the two-time Four Continents champions were also awarded many positive GOEs as well as a level four for all lifts and twizzles. They scored 125.68 for second place in the free dance and 208.23 overall.

The team was extremely happy with how they performed today and loved stepping into the characters of alien and astronaut. They enjoy exploring this theme whether it’s in training or in competition, and also feel that today was another step up from Finlandia Trophy where they finished second.

“Performing for the crowd today was such a joy!” said Chock. “It feels special and rare now because it’s been such a long time since we have been able to perform in front of our families and a live audience. So we are very grateful for that and grateful for the opportunities we had at Skate America to show our programs. We are very excited to keep growing this season and we are going to fix some more points and work on our technical for the rhythm dance. We are absolutely thrilled with how this week went and I am very proud of Evan and myself for what we accomplished.”

Chock and Bates also have not set any hard expectations as they feel that just sets things up for disappointment. They simply want to control what they can in terms of their job, training, skating, and check all the boxes to prepare themselves as best they can for the Olympics.

“Everyone will be doing that as well, so it’s a matter of doing the most that you can without over-stretching yourself in what’s essential and what’s essential to you,” said Chock. “Evan and I have a good mindset at that and like our teammates, we are in great hands and we are deeply supported by each other and we are grateful to have these wonderful people alongside us training each day. We know what it’s like going through the same ups and the same downs. It’s great to have this team to lean on when you are in one of the most stressful situations out there that you can put yourselves in. We are very grateful. These are great special people up here.”

Fournier-Beaudry and Soerensen displayed very good transitions throughout their routine, but their opening element — a straightline-rotational lift — received a one-point deduction for being extended. Both skaters received a level four on their twizzles, as well as their clever stationary lift and combination spin, and they finished fourth in the free dance (114.80). With a total score of 190.13, the 2021 Lombardia Trophy silver medalists were able to maintain third overall for their second Skate America Bronze.

“For me it’s something very emotional to be here and especially being on the ice with the people I admired for a long time and that I still admire every day,” said Fournier-Beaudry. “I am feeling so blessed to be now part of something so much bigger and feel that I am slowly achieving some dreams. I felt that this competition was a dream.”

“We are so happy performing our free dance again,” said Soerensen. “We only did it once and not in front of an audience and it’s a very personal one for us about our own story and our background coming together and we are happy with our performances. And, in front of a live audience, it’s very special!

“This is our third grand prix for Canada with a bronze medal,” added Fournier-Beaudry. “We are extremely proud of the result that we did. It was so nice to be back after two years of struggle and feeling like the machine is rolling and the bodies are rolling again.”

“Being back here and asking how are we going to move up, well when you are competing against the top six on the world, it’s one step at a time,” summed up Soerensen. “We are big believers in steady habits and good habits at home in terms of training and tick all the boxes since that is where the confidence comes from. So being the most ready you can.”

Olivia Smart and Adrian Diaz of Spain finished third (115.63) in the free dance with their alluring performance to music from The Mask of Zorro. The 2021 Autumn Classic silver medalists were awarded many positive GOEs for their level 4 lifts, twizzles, and combination spin, and finished fourth overall (189.69).

“It’s an easy story to express and to perform because it’s pretty clear,” said Diaz of the theme. “So far, the feedback from the judges and the federation has been great and they’re happy with the choice of music. It was a hard process to find the music that we both liked and that we both connected to.” “And to please everybody,” chimed in Smart. “Something that we connected with might not resonate with the crowd or the judges, so we felt like we just needed to find a piece of music that we connected with and the crowd could just reflect on as well.”

Their goal this season was to get a spot on the Olympic team, but they wouldn’t mind getting a Grand Prix medal.

Smart and Diaz were indeed within reach of a medal at Skate America and they will have another chance next week at Skate Canada.

“We believe we can get a grand prix medal,” said Smart. “It’s just going out there and putting out your best performances and focusing on us as a team and doing what we can do and hoping for the same outcome in the results. It would be great to get a bronze medal for Spain and take that through the rest of the season.”

Russia’s Annabel Morozov and Andrei Bagin placed fifth in the free dance (106.53) and overall (175.32) after their story-telling performance to Scheherazade which featured level-four lifts, twizzles and combination spin.

The team began creating their free dance before the pandemic hit and then put it back on the shelf due to time constraints. The decided to revisit it for the Olympic season and felt they had both matured enough to skate to it.

“We want to make it our own and unique,” said Morozov. “Even taking when Meryl and Charlie did it in Sochi, I think ours is a little bit different, the way we portray the characters and even costume-wise and movements. We are just trying to take the story and represent it in our own way.

The Russians prepared for the piece when they read the whole story, watched a bunch of videos, and attended some ballets to get inspiration for the different kinds of movements they would need.

“What is cool about our piece of music is each ballet or there is even a movie about it, everyone kind of portrays the characters a little bit differently, so I think we both just tried to take pieces of each thing that we saw and make them our own,” explained Morozov.