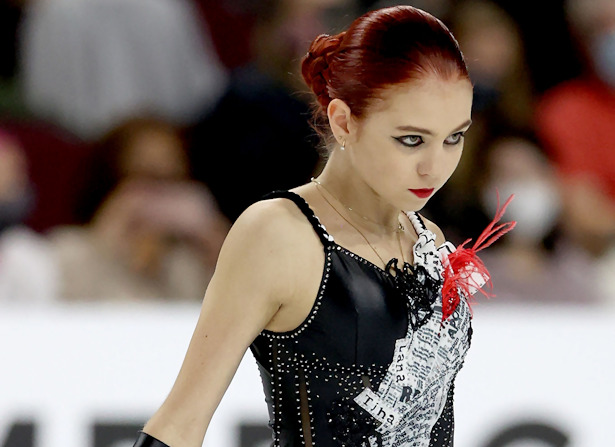 Alexandra Trusova of Russia performs to the Cruella soundtrack at 2021 Skate America.

Alexandra Trusova of Russia dominated the Women’s event at 2021 Guaranteed Rate Skate America to win the gold with 15 points to spare on Sunday in Las Vegas, Nev. Teammate Daria Usacheva captured the silver in her Grand Prix debut, while You Young of South Korea rose from fifth to claim the bronze.

Trusova, who was first (77.69) after a clean short program, took command of the ice with her clever and relevant routine to music from the Cruella soundtrack. The 2021 World bronze medalist landed a quad Lutz and seven triple jumps. The only error was an edge call on a triple flip (in combination with a triple Salchow), but she received a level four on two of her spins and finished first in the free skate with 154.68 points and overall (232.37).

Trusova, who came into the competition with a foot injury, was initially considering withdrawing. However, her free skate technical content was scaled back instead. In fact, it was like a day of rest for the “quad queen” who wanted three quads in the competition.

“I am pleased with my performances here in this competition, but obviously I would like to have a higher degree of difficulty in my programs,” said the 17-year-old. “But other than that, I am happy.”

“I will have a few days to recover and then I want to get into good shape again,” she added. “Obviously I want to add the difficulty, but also work on everything else in my program: the spins, and the overall skating and the presentation.”

In May 2020, Trusova had switched coaches to Evgeni Plushenko, but came back to Tutberidze on year later.

“I have no regrets of going back and I think the approach of Eteri Tutberidze is suiting me better,” she confirmed.

Usacheva also had a clean short program and was actually right on Trusova’s heels with 76.71 points. In her free skate to “Nessun Dorma,” the 2020 World Junior silver medalist landed six triple jumps, but the two triple Lutz jumps (both in combination) received an edge call and she stepped out of a triple flip. She otherwise scored a level four on all three spins and footwork to finish fourth in the free skate (140.60). With a total score of 217.31 points, she was able to maintain second overall with all three scores posted as a new personal best.

“I am a little but upset about my free skate because not everything worked, out but I am happy with my result,” said the 15-year-old. “For me, it was more difficult here than in other competitions because it was my first senior international competition.”

Young opened with a triple Axel in her routine to Les Miserables, but it was slightly underrotated as was the back-end of a triple Lutz-triple toe and double Axel-triple toe. The triple flip also received an edge call, but the 2020 Four Continents silver medalist otherwise landed a solid triple Lutz-Euler-triple Salchow which garnered many positive grades of execution (GOE). All spins and footwork were graded a level four and she scored 146.24 points for second place in the free skate. With a total score of 216.97, she found herself on the podium.

“Today, I tried to put it down and not put too much pressure on myself,” said the 17-year-old from Seoul. “I think the triple Axel was a little q (slightly underrotated) and my other triples are a little q, but I am still happy that I didn’t make a big mistakes in my free program. But I need to work on my nerves. When I get nervous, I do mistakes so that is my next goal for my next competition.”

“Last year season was not that good so after I wasn’t qualified to the Worlds,” she offered. “I think I was too lazy by myself, so I was more strict to myself so I think that hard work paid off today. So, after this competition, I think I will keep it up and make it to the Olympics.”

Japan’s Kaori Sakamoto finished third in the free skate and fourth overall (144.77/215.93). The 2018 Four Continents Champion received an edge call on a solo triple Lutz, but the program was otherwise solid with a total of six clean triple jumps along with two level-four spins and footwork.

“It’s a very rare experience to compete four weeks in a row,” said Sakamoto regarding the competition schedule and making time for improvement. “It’s not something that happens all the time, but one thing that was good actually was that I always had a goal right in front of my eyes. That was to be better than what I did last week and better my performance from the week before. I was able to do that here so that was a great experience for me.”

Kseniia Sinitsyna of Russia slightly underrotated a triple flip (in combination with a double toe) but was otherwise clean in her routine to music from The Queen’s Gambit which included six solid triple jumps. The 2020 WYOG silver medalist, who was third after the short, finished fifth overall (205.76).

USA’s Amber Glenn gave a superb performance to “Rain, In Your Black Eyes” which featured six solid triples. The national silver medalist placed seventh in the free skate and overall (133.45/201.02) with both scores topping her previous personal bests from 2020 Four Continents.

“I got the job done,” said the 22-year-old who earned a standing ovation. “I know I can hold my own internationally and this was a taste of that. This year I am hugely focused on consistency.”

Satoko Miyahara of Japan finished seventh (134.15 / 200.51). She looked calm in her extraordinary performance to Tosca, but three triples were underrotated.