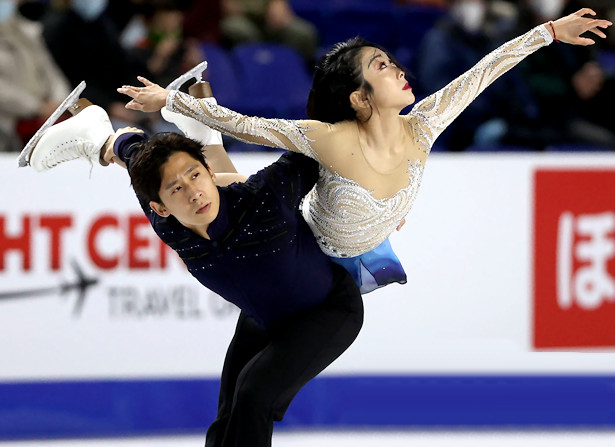 Wenjing Sui and Cong Han of China perform their Free Skate to “Bridge Over Troubled Waters” at 2021 Skate Canada.

Wenjing Sui and Cong Han of China took gold at 2021 Skate Canada with over 30 points to spare in the Pairs’ event on Saturday afternoon in at Vancouver, BC. Russia’s Daria Pavliuchenko and Denis Khodykin finished second, while USA’s Ashley Cain-Gribble and Timothy LeDuc rose from sixth to snatch the bronze.

Sui and Han put out two solid programs in this event. The only mistake was a fall by Sui on the side-by-side triple Salchows in their mesmerizing free skate to “Bridge of Troubled Water.” The team also showed a very good triple twist, side-by-side triple toe-double toe-double toes, a throw triple flip and Salchow, and strong lifts. All elements received a level four except for the group 5 reverse lift (level 3). The first finished first in the free skate and overall (145.11/224.05).

“We had a lift and pair spin that needs to improve at the next competition,” noted Sui. “This is our first Grand Prix in Canada, so it’s really exciting. We want to say thank you to everyone, everyone was so professional!”

They will compete next week at 2021 Gran Premio d’Italia in Turin, Italy.

Pavliuchenko and Khodykin were second (69.46) in the short and finished third in the free skate with 123.62 points. Their routine to Black Swan featured a strong level-four triple twist, but she struggled on the side-by-side triple toe-triple toe-double toe and took a fall on the side-by-side triple Salchows. While the throw triple loop was good, she put a hand down on the throw triple flip, but two of their lifts received a level four. With a total score of 193.08 the 2020 European bronze medalists finished second overall.

“Today our free program was bad and we know this,” said Khodykin. “We know why and what to do and how to work to be better and to skate cleaner.”

Cain-Gribble and LeDuc had a sub-par short, but rallied in their intriguing free skate to music from the W.E. soundtrack. The U.S. National bronze medalists put produced an excellent throw triple Lutz and group 5 Axel lift, however the twist was graded a level 2 and their side-by-side triple Salchow-double toe-double loops were underrotated. They scored a new season’s best of 128.22 for second place in the free skate and rose to third overall (189.90).

“We’re really happy with the program and it helps our confidence,” said Cain-Gribble. “There were a lot of levels we didn’t get which kept our score under the 130-mark, but we are going to focus on consistency.”

“We attacked everything and stayed true to our skating,” added LeDuc. I think there are some good and bad things to take away from this competition. We are putting more and more effort into the choreography and transitions and we want these programs to really blend. We have a few days to train when we get back, so we will work on that.”

Their next competition is NHK Trophy in Tokyo, Japan and possibly a Senior B before nationals.

In their fourth international competition this season, Canada’s Vanessa James and Eric Radford finished fourth overall (187.92). The team stood in fifth coming into the free skate which featured a level two triple twist, side-by-side triple Salchows, and a very good throw triple Salchow. However, James underrotated and fell on the side-by-side triple toes and then put a hand down and stepped out of the landing of a throw triple Lutz. Their free skate score was 122.90.

“I think that aspects of our program grew and improved after Finland, but certain other elements need improvement and certain levels that we thought would be there, weren’t,” said Radford.

“We know that we are capable,” said James. “It’s our fourth competition, but we are definitely getting stronger each time we go out there. We are trying not to have expectations, but just goals. There is a lot of pressure on the outside, but we are trying to stay in our bubble. We are just waiting for ourselves to show what we can do.”

Germany’s Minerva Fabienne Hase and Nolan Seegert , who stood in third (67.93 ) after the short, left points on the table with lower levels and grades of executions on many elements. While the side-by-side triple toe-double toes were good, Hase team struggled with the throw jumps and the team finished fifth in the free skate (118.89) and slipped to fifth overall (186.82).

“Today the free skate was kind of hard,” said Hase. “I felt a little bit shaky at the beginning, I was tired. We can still be proud of the program. Last season, we did more mistakes.” “It wasn’t a bad program,” added Seegert, “but we need to be more clean with such strong pairs.”

Kirsten Moore-Towers and Michael Marinaro landed clean jumps, but struggled with their lifts in the free skate (113.82). They slipped from fourth to sixth overall (180.25).

“Our Free was going pretty well,” said Moore-Towers. “We did a great job on precision. The first lift we mixed the hands, but Michael salvaged that. There is no rhyme nor reason for the lifts. We had a tricky practice this morning, so we had more focus on the jumps and throws.”