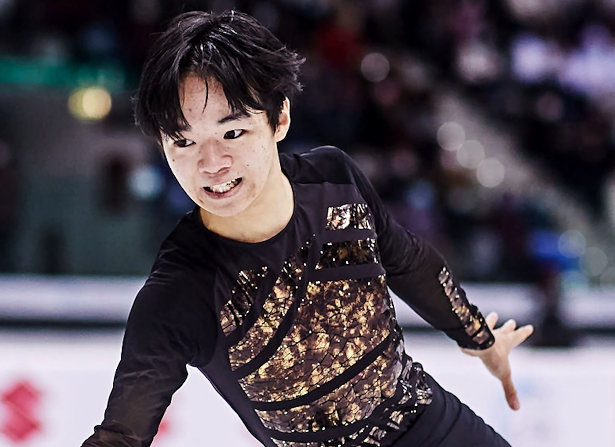 Japan’s Yuma Kagiyama soared from seventh place to capture the gold in the Men’s event at 2021 Gran Premio d’Italia in Torino, Italy, on Saturday. Mikhail Kolyada of Russia rose from fourth to second to edge out Italy’s Daniel Grassl for the silver.

Kagiyama turned out his opening quad Salchow, but landed a quad toe-triple toe, quad toe, and six more clean triple jumps. The 2021 World silver medalist also earned a level four on all his spins in his “Gladiator” routine and placed first with a new personal best of 197.49. With a total score of 278.02, the 18-year-old captured the gold.

“I was really surprised!” said Kagiyama. “Coming into the free skate I didn’t even think about being in the podium. I didn’t think about the scores or outcome, but I am really happy. It was difficult to change my mindset after the short program yesterday as it was the worse one I have ever done. So today I skated without the quad loop, but did every thing else I could do. There were so many things I was thinking about and I was so tense.”

“Since Finlandia Trophy, I have practiced the jumps and tweaked the music so its more accentuated,” he added. “I know what the challenges are going into the next competition. At the Olympics I know I will have to have a solid short program.”

Kolyada stepped out a quad Salchow, triple loop, and quad toe in his routine to Schindler’s List, but managed a solid quad toe-triple toe along with excellent level-four spins and footwork. The Russian Champion placed second in the free skate with a new personal best of 181.25 and finished second overall with 273.55 points.

“It was an emotional performance and the audience was with me,” said Kolyada. “Not everything was clean, so I will continue to work hard. I feel that I have started to skate with more confidence and we will see what happens at the next competition. My coach said we are moving in the right direction and I believe him.”

Grassl hung onto the landing of his opening quad Lutz but slightly underrotated the front end of a quad-loop-Euler-triple Salchow, a triple Axel, and the back end of a triple flip-triple loop.  The Italian Champion finished third in the free skate and overall (173.33/269.00) .

“I wanted to do a good skate and this is my first podium in Italy,” he said. “I really want to thank those people in the crowd who supported me. I’m happy with the program. After the short program, I ate something and didn’t feel good and kept throwing, up so I couldn’t sleep.”

Deniss Vasiljevs of Latvia fell on his opening quad Salchow and stepped out of his triple Axel, but landed an additional eight more jumps. All spins and footwork were graded a level four and the four-time national champion finished fourth in the free skate and overall (163.35/248.44) with new personal best scores.

“I am so happy I could compete in front of the audience here,” he said. “It’s an overwhelming feeling! The next thing I want to do now is to eat something sweet!”

South Korea’s Junhwan Cha slipped from third to fifth overall (247.74) after placing sixth (152.18) in the free skate. The five-time national champion fell on his opening quad toe, popped the Salchow to a double, and slightly underrotated two triple jumps.

“It was disappointing for me but I really tried my best and fought through,” said the 20-year-old. “Today’s mistakes…I just want to keep working on making quality jumps moving forward.”

Kazuki Tomono of Japan landed a quad toe-triple toe, quad Salchow and quad toe, but bungled his flying sit spin and struggled on his triple Axels to finish sixth overall (245.11).

“I tried to minimize the mistakes in my practice,” he said. “I think yesterday’s skate lingered in my head. The spins are an element of worry for me and I need to work on them. I was shaken a bit by the (popped) Axel.”

Overnight leader Boyang Jin of China struggled with nearly all of his jumps, falling on a quad toe and triple Axel, to place ninth (144.38) and slipped to seventh overall (242.27).

Russia’s Petr Gumennik landed a quad toe and quad Salchow-double toe-double loop, but took a fall on a quad Salchow and slightly underrotated the back end of a triple Lutz-triple loop to finish eighth overall (226.76). Teammate Dmitri Aliev of Russia finished ninth (217.67), followed by China’s Yudong Chen (200.96) and Gabriele Frangipani of Italy (167.60).

Germany’s Paul Fentz withdrew prior to the free skate.