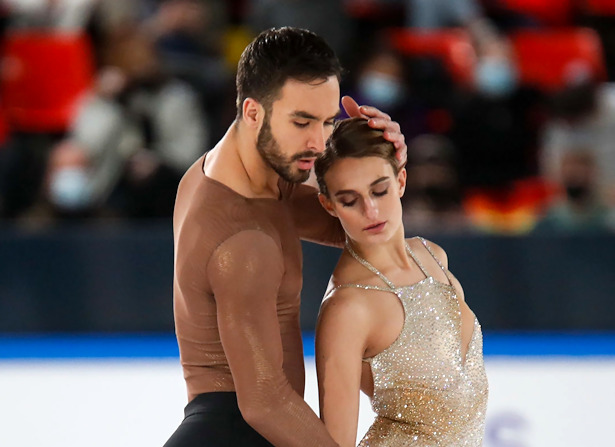 Papadakis and Cizeron gave a good performance which featured intricate footwork and beautiful lifts. The Four-time World Champions collected a level four for the lifts, the combination spin and her part of the twizzles and one-foot step sequence while the diagonal step sequence and his twizzles were rated a level three. The team racked up many high positive grades of execution (GOE) in their “Elegie” program and finished first in the Free Dance (132.17) and overall (221.25).

“It was good to skate back home in France,” said Papadakis. “We felt really supported. Our performances were good, but we still have some little things to work on towards the Final. We appreciate it now after the pandemic that it is possible to have an event with such a big audience.”

“There are some levels we need to work on,” Cizeron added. “We have two weeks before the Grand Prix Final to improve.”

Gilles and Poirier displayed level-four lifts, twizzles and a level-four combination spin in their performance to “The Long and Winding Road” by the Beatles, earning many positive GOEs along the way. The diagonal steps, however, were graded a level two. The 2021 World bronze medalists finished second in the Free dance (121.81) and overall (203.16 points).

“We made some improvements compared to Skate Canada, but our score is a bit lower and we need to go back and evaluate that,” noted Gilles. “We are excited to go back to the Grand Prix Final and we’ll go home and work on the things (levels) we lost here.”

“We wanted to have a program that feels really Olympic,” said Poirier, when asked about the music. “Seeing Tessa and Scott’s 2018 program really inspired us, so we wanted to create something really big and orchestral for the Olympics. We haven’t been to China in seven years, so we are very excited to come back to China and skate for the Chinese audience again.”

“We are dreaming about being on the podium,” added Gilles, regarding the Olympics, “but we are first of all really excited just to go to another Olympics and feel the atmosphere and also cheer on other athletes.”

Stepanova and Bukin only received a level one on their one-foot steps and a level two on their diagonal steps, but their routine to “Romeo and Juliet’ otherwise featured five level-four elements, including solid twizzles. The Russian Champions pocketed 120.40 points, just short of their season’s best, and accumulated 200.29 points overall for third place.

“We’ve made a little step forward since our first Grand Prix in Italy and we are more satisfied with what we did here,” Bukin said. “Each competition is a preparation towards the Olympic Games, regardless of the level.” Stepanova added: “We hope to improve from one competition to the next to be in the best possible shape for the Olympic Games.”

Evgeniia Lopareva and Geoffrey Brissaud of France earned a level four on the twizzles, three lifts, and combination spin, while the serpentine steps were graded a level two. The national silver medalists finished moved up to fourth overall (175.94) after their Free Dance (106.71) in their second Grand Prix appearance.

“This was our first senior Grand Prix season and we are very happy with the result,” said Lopareva. “It’s our season’s best!” “We are really happy to make the top five,” added Brissaud.

USA’s Christina Carreira and Anthony Ponomarenko showed good level four lifts, however, one received a one-point deduction for being extended. Her twizzles were graded a level four, while his were a level three and the circular steps a level two. The 2018 World Junior silver medalists finished seventh in the Free Dance (105.17) and slipped to fifth overall (175.91).

“We feel really good about both performances,” said  Carreira. “We think we improved since Skate Canada and we want to keep improving until nationals. Since we started working with the Ice Academy of Montreal, we have really improved on our mental strength.”