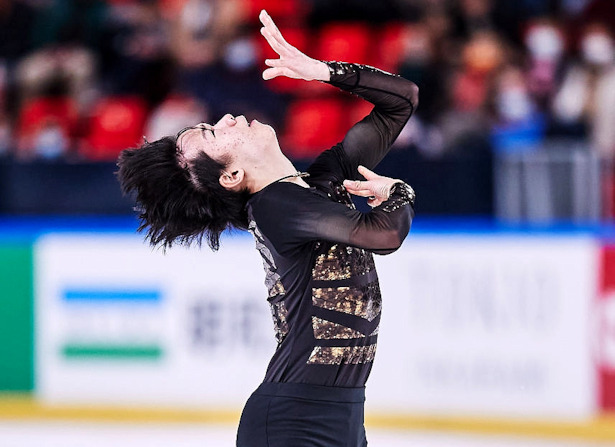 Yuma Kagiyama took his second consecutive Grand Prix gold of the season at the 2021 Internationaux de France in Grenoble, while teammate Shun Sato rose from fourth to second to capture his first Grand Prix medal. USA’s Jason Brown maintained third overall to take the bronze in what is his 16th Grand Prix appearance.

Kagiyama nailed his opening quad Salchow and quad toe-triple toe, both of which earned high grades of execution (GOES), but put a hand down and turned out the landing of a quad toe later in his “Gladiator” routine. While the 2021 World silver medalist stepped out of the back end of triple flip-triple loop and popped an Axel, he was otherwise solid and earned a level four on all three spins. He scored 185.77 points for first place in the free skate and overall (286.41).

“I’m really happy with my win, but the second half (of my program) was disastrous,” said the 18-year-old. “Maybe it was an emotional thing or maybe it was a perseverance thing. There is much more regret than happiness.”

“The Grand Prix Final was a goal for the season and I really want to take part as it’s in my country,” he added. “When I think about if I can be really competitive, I still don’t think I have what it takes and need to look back and see what I still lack. I still need to have better quality jumps in the second half of my program and work on the quad loop. I avoided it (quad loop) because after the short program, I was wondering if I could do it. It’s not as solid as my Salchow or toe, and if I make a mistake, the program would crumble.”

“There is a limit as what you can do, and I’ll be focusing on jumps and the levels on my spins and steps before the next competition, as well as the consistency on my quad loop,” Kagiyama summed up.

Sato landed a very good quad Lutz, but stepped out of a quad toe, popped the second jump in  quad toe combination, and received an edge call on a quad flip and triple flip. Two spins were graded a level four and the 17-year-old from Saitama finished third in the free skate with a season’s best of 177.17 for his performance to The Phantom of the Opera. With a total score of 264.99, he moved up from fourth place to second overall (264.99).

“To be honest, there are pros and cons about the performances of this competition,” said Sato. “I will be making improvements as my goal this season is to just have clean programs. I am really happy to be on the podium for the first time, but I need to catch up to Yuma so I will work hard.”

Brown two-footed the landing of his opening quad Salchow in his poignant routine to Schindler’s List and then slightly underrotated a triple Axel. He also received an edge call on a triple Lutz (in combination with a popped Salchow) and doubled a loop, but showed excellent level-four spins and footwork to finish fourth (174.81) in the free skate. With a total score of 264.20, the 2020 Four Continents silver medalist missed second place overall by just over half a point for third place.

“I can’t complain,” said the 26-year-old of his quad Salchow. “I just keep raising the bar, so that was a big exciting thing for me today. I’m definitely learning a lot as the season goes on and trying to kind of take every step along the way and grow from them and bring it into the next competition. This is my eighth or ninth Grand Prix season and I feel so lucky to still be up here.”

Brown must wait to see whether his second place at Skate Canada International and third place here in France will be enough to take him to the Final.

Deniss Vasiljevs of Latvia finished seventh (164.72) in the free skate and slipped to fourth overall (254.48). The four-time national champion underrotated and stepped out of his quad Salchow and then underroated a triple Axel, but landed a total of seven clean triple jumps. He also showed excellent level-four spins and footwork which earned many positive GOES and posted three new personal best scores for this event.

“Coming into the free skate, I felt a bit nervous, like too sparky,” he admitted. “The skill is there, but I was forcing it a bit.”

Russia’s Dmitri Aliev slightly undderrotated and stepped out of a triple Axel, but was otherwise clean in his routine to “And The Waltz Goes” On by Anthony Hopkins. The 2020 European Champion landed a nice quad toe-triple toe along with six other triple jumps. He also showed level-four spins, but the footwork was only graded a level two. He finished fifth in the free skate and overall (168.51/253.56).

Keegan Messing of Canada put a hand down on his opening quad toe, turned out the landing of a triple Lutz-triple toe, and received an edge call on a triple flip. However, the national bronze medalist landed  a quad toe-double toe and showed two strong level four spins to finish sixth overall (253.06).

“I had slow start to the season as it’s taken me time to figure things out,” said Messing. “After Skate Canada, we decided to work on the long program and have a better strategy. It’s still not perfect, but I feel like we are on the right track now.”

Andrei Mozalev of Russia had a very good skate which featured a quad toe-triple toe, quad Salchow, and quad toe. The 2020 World Junior Champion also produced an additional three clean triple jumps and showed level-four steps and spins to finish second in the free skate (179.77). With a total score of 248.54, he moved up from ninth to seventh overall.

“It felt really good to skate in my country because the fans were really supportive,” said Siao Him Fa. “I knew that it would push me more and more and I really enjoyed the moment! Today there were mistakes which were mental and I have to work on that.”

“The last three weeks I worked a lot and had a really bad summer,” said Aymoz. “I just worked so much and yesterday I was so stressed, but today I had nothing to lose and I just got it together and skated. I’m going to go back to work in Florida and change a few things in the program.”

This was Ponsart’s last Grand Prix event. He will now compete at nationals in hopes to get a spot in the Olympics. Afterwards, he’d like to coach and possibly open a school for skating.