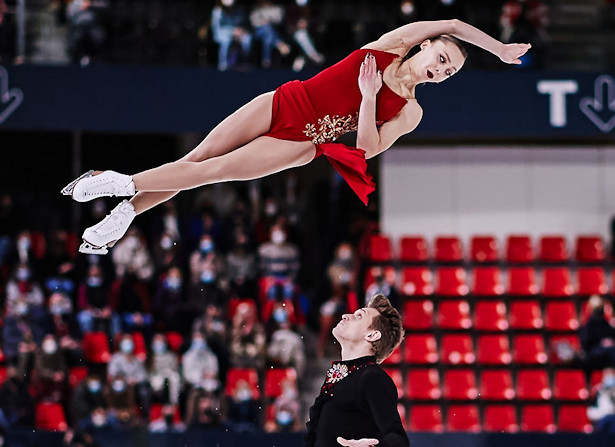 Aleksandra Boikova and Dmitrii Kozlovskii of Russia maintained their overnight lead to a Grand Prix victory at 2021 Internationaux de France on Saturday. Teammates Iuliia Artemeva and Mikhail Nazarychev earned their the silver, while USA’s Alexa Knierim and Brandon Frazier rose one spot to claim the bronze.

Boikova and Kozlovskii opened their routine with strong side-by-side triple Salchows, but then Boikova stepped out the side-by-side triple toe combination and later stepped out of a throw triple loop. The rest of the program to “Malaguena” was clean with the world bronze medalist showing a strong level-four triple twist and lifts, as well as throw triple flip. The team earned a new season’s best of 139.79 for first in the free skate and maintained first overall (216.96).

“We fulfilled our minimum task which was to qualify for the Grand Prix Final,” Kozlovskii said. “It was much easier to skate today as this is our second competition. We skated much better than at Skate America, so there is progress, which is the most important thing.

“There were some small errors, really stupid ones, but that’s what competitions are there for, to improve from one to the next,” added Boikova.

Their goal is to skate more clean and to do more work on the free skate. They feel the short program has already shown a good deal of progress and is moving in the right direction.

Artemeva and Nazarychev opened with side-by-side double Axel-Euler-triple Salchows and a throw triple twist, however, Artemeva doubled and stepped out of the triple toes . That was the only mistake in an otherwise good program which featured a throw triple flip and throw triple loop as well as level four lifts , death spiral, and spin. The 2020 World Junior bronze medalists scored a new personal best of 132.13 for their second-place free skate and total score of 205.15.

“We are pleased for today,” said Nazarychev. “There was one mistake, a major one, but overall it was a good performance. We set goals for ourselves to do well on the Grand Prix and I think we fulfilled that.”

The team from Perm will have to wait and see if their silver and bronze medals from the Grand Prix series will get them into the Final.

Knierim and Frazier, who were in fourth after the short program, finished third in the free skate (131.54) and overall (201.69). The U.S. Champions only earned a level two on the triple twist and Frazier took a fall on the side-by-side triple toe combination, but the rest of their routine was clean. They showed a solid throw triple loop, as well as side-by-side triple Salchows, a throw triple flip, and level-four lifts, death spiral, and spin.

“I actually think it was reasonable to keep our energy up after the fall which is very untypical for Brandon,” said Knierim. “I think we did a good job today!”

“We are very happy to win our first Grand Prix medal,” she added. “We left some points on the table today, but we made a lot of great improvements from our last event. We have plans to keep improving and we are proud of today’s work.”

When asked about coaching, Knierim said: “Sometimes I see myself in my students, and I see that sometimes they are getting stressed out about little unimportant things. So I try to calm them down and try to teach myself the same as I teach them.”

“The first half of our program went excellent,” noted Radford. “And then the unfortunate incident with the lift happened. That’s unfortunate.”

“The cheering public really helped us a lot and made us feel like home,” said James. “This is the most confident we have felt since we started skating together. We lost about 13 points on easy elements today, that we usually never miss, but we are proud that we got the hard ones done.”

“We feel really connected to this piece of music, so even though the piece is called ‘Falling’, it feels uplifting to us,” said Radford.