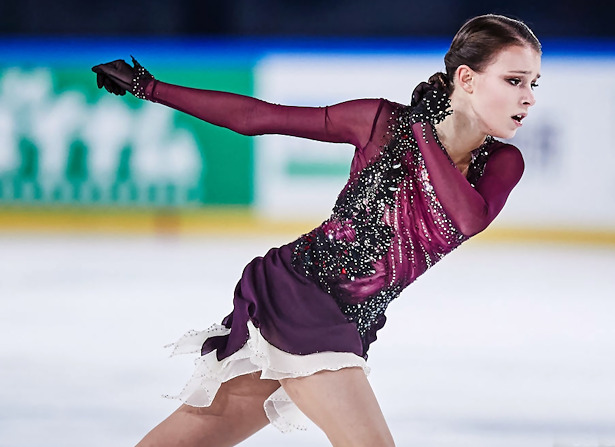 Shcherbakova fell on her quad Lutz attempt in the opening of her routine, but recovered to land a quad flip followed by a triple flip-triple toe. The World champion received an edge call on the front end of a triple flip-Euler-triple Salchow, but landed a total of six triple jumps. She also earned a level four on all three spins and footwork to score 151.75 for the free skate and overall (229.69).

“I am still a little bit shocked because I don’t know what happened at the first jump,” said the two-time national champion. “I need time to watch my performance. I felt really energetic coming in today and I was really concentrating. I did very well in the six-minute warm up and could also recover well after the mistake at the beginning.”

For the Grand Prix Final, Shcherbakova is mainly going to work on the short program as it’s new. “Regarding my Free Skate, I want to gain more confidence for my quads to avoid mistakes as today.”

Kostornaia fell on her opening triple Axel attempt, but hung onto her triple Lutz and then executed another six triple jumps, most of which were scored +3 grades of execution (GOE). All three spins were graded a level four while the footwork was a level three and the 2020 European Champion finished second in the free skate and overall (145.41/221.85).

“I had a big mistake on my triple Axel,” she noted. “I did it much better at home in Moscow. I need to do two triple Axels but I can’t and I am sad about that. But I am happy I did well with the other jumps.”

“Coming here I was full of positive energy, which is not always the case,” Kostornaia added. “It was unusual here at the competition to practice that early in the morning. Maybe I wasn’t fully awake then. Also the very early competition was unusual for us. I know my strengths and weaknesses, my coaches know them too, but I don’t want to talk about it. I just need to work hard.”

When asked about her makeup, the 18-year-old responded: “I really like to experiment and I like to be different. I think about all of this myself. Also my hairstyle. I am referring to Billie Eilish who is also not afraid to look different, and than others, and I really relate to that.”

Higuchi slightly underrotated her opening triple Axel as well as the middle jump in a triple Lutz-triple toe-double toe combination. While the 2018 World silver medalist received an edge call on a triple flip, she landed a total of five clean triple jumps and earned a level four for her footwork and two spins. She finished third in the free skate (141.04) and rose from sixth place to third overall (204.91).

“I was really happy like I did it!” she said. “When I finished the program, in the Kiss & Cry my coach said, ‘You did it!’ so I was happy. “There were little mistakes, and in other competitions and yesterday, I had under rotations and maybe some lower levels in spins, but overall, it was done well. I will not do something more difficult, but improve the quality and aim for 145 points and a perfect performance at Nationals.”

Kseniia Sinitsyna of Russia finished sixth (128.87) in the free skate after slightly underrotating the back end of a triple Lutz-triple toe and the both jumps in a triple Lutz-Euler-triple Salchow. The 16-year-old from Moscow also received an edge call on a triple flip (in combination with a double toe), but showed a good level-four layback spin. With a total score of 198.76 points, she slipped to fourth overall.

“I feel like I really grew as a skater and as a person since the last Olympics,” said Chen. “The battle of how I deal with anxieties and competition nerves also changed a bit. I got more sensitive towards that. Practices went really well recently and my jumps have been more consistent than ever before. I just have to figure out how to transfer it to competition.”

Teammate Mariah Bell, who stood in 10th after the short, placed fourth (129.98) in the free skate and rose to sixth overall (190.79). The 2020 U.S. silver medalist landed six triple lumps, but both triple Lutz jumps received an edge call.

“I am very happy,” said Bell. “The scores are a little bit low and I will have to see if it was levels, or maybe the judges held back a little in PCS as it’s so early in the competition. Today I really feel like I was attacking and not as hesitant as yesterday. I am looking forward competing in Russia next week.”

Yokoi was thrilled with her performance and said she had changed her mindset from yesterday.

“I know I don’t have much more time left in my career and without good results,” said the 20-year-old. “I told myself that today could be my last performance so that was the major difference in coming into today’s performance. I still wonder if I should continue, and when I have a good performance, I am truly happy and that is why it keeps me going. Today’s good performance made me feel that I might be able to continue.”