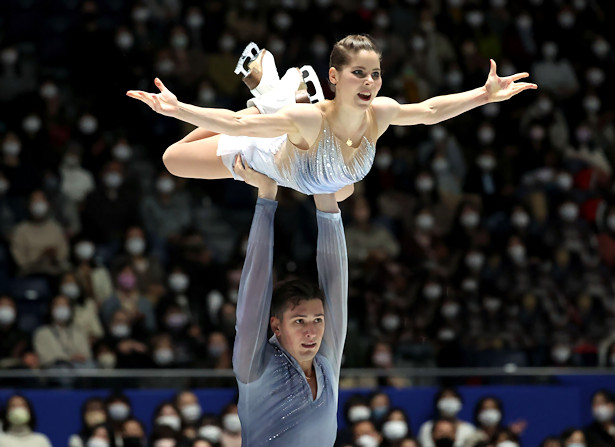 Russia’s Anastasia Mishina and Aleksandr Galliamov perform a lift during the Free Skate at 2021 NHK Trophy.

Mishina and Galliamov put out a very strong routine to “The Snowstorm” by Georgi Sviridov which featured side-by-side triple Salchow-Euler-triple Salchows and triple toes, and very good triple twist. The throw triple flip garnered many high positive grades of execution (GOE) and all elements were graded a level four. The only mistake came when Mishina put a hand down on the throw triple loop. The 2021 World Champions finished first in the free skate and overall (148.88/227.28).

“We are satisfied with our performance today, but it is not the maximum yet, there is still room to grow,” Galliamov said. “We really enjoyed the atmosphere in Japan and we felt the support and these are incredible emotions.”

Tarasova and Morozov had a strong start in their routine to “Lighthouse” by Patrick Watson, nailing their opening side-by-side triple Salchows and excellent level four triple twist. However, Morozov doubled the first jump and singled the last in the planned side-by-side triple-toe-double-toe-double toes. Tarasova struggled on the throw jumps, putting a foot down and stepping out of the throw triple flip and throw triple loop. The two-time world silver medalists placed second in the free skate and overall (137.49/213.27).

“We made quite a few errors today, so we were not able to give a good performance. We will continue to work,” Morozov commented.

“Since the last Olympics, we developed a lot in our style and our elements,” said Tarasova. “We had a lot of changes in our personal and our skating life. We worked a lot on our skating and choreography. We always look forward and want to progress as a team. ”

Miura and Kihara showed an excellent throw triple Lutz which garnered many positive GOEs, however Miura put a foot down on the back end of the side-by-side triple toe-double toe-double toes, doubled her triple Salchow, and put a hand down on the throw triple loop. The 2021 Skate America silver medalists earned a level four on all three lifts and pair combination spin in their program to “Woman” by Shawn Phillips, and placed third in the free skate and overall (135.44/ 209.42).

“During the practice I didn’t really get a handle on my Salchow, but I tried to to listen to our coaches in order to achieve it,” said Miura. “I am disappointed that I couldn’t fix the problem.”

Nevertheless, the Japanese Champions were able to achieve their goal in winning a medal and are content. In fact, they were a bit surprised as they the both programs had errors.

“We really feel like we’ve grown,” said Kihara, adding that he learns from her mental strength. “Off ice she can be a bit forgetful and I will have to remind her to keep her things together .” Both skaters laughed at that and Miura said of her partner that he was mentally strong and very fun to be with.

USA’s Ashley Cain-Gribble and Timothy LeDuc finished fourth overall (132.04/202.79) after their free skate to music from the W.E. soundtrack. The 2018 Four Continents silver medalists landed their side-by-side triple loops and triple Salchow-double toe-double loops and earned a level four on two lifts and the pair combination spin. Cain-Gribble hung onto the landing of a throw triple Lutz, but took a fall on the throw triple Salchow.

“With this program we won our first Nationals,” said Cain-Gribble. “It’s a program that is very special for us and we didn’t think it was time the program was ended yet, so we wanted to skate it in the Olympic season.”

“Today was a tough skate for us, mentally and physical,” said Hase. “We are not used to skating bad short programs, so it was mentally tough. We still gave all that we had left today. The fall during the choreo sequence was unnecessary. We now have enough time to prepare for German nationals.”