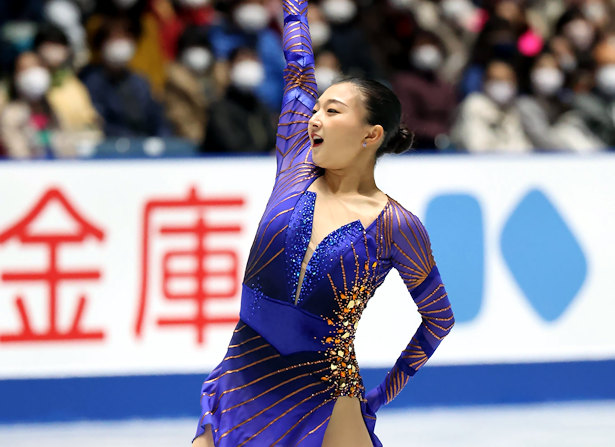 Kaori Sakamoto of Japan defended her title in the Women’s event at 2021 NHK Trophy on Saturday in Tokyo. Teammate Mana Kawabe took her first Grand Prix medal—silver, while Young You of South Korea edged out USA’s Alysa Liu for the bronze.

Overnight leader Sakamoto received an edge call on a triple Lutz and slightly underrotated the middle jump in a double Axel-triple toe-double toe, but those were the only mistakes the Japanese silver medalist made in her program. In all, she landed five solid triple jumps, including a triple flip-triple toe—which garnered may high grades of execution (GOE). The 21-year-old also received a level four on all three spins and footwork to score first in the free skate and overall (146.78/223.34).

“My first and last jump I was angled in the air, but at least I put in good short and long programs,” said Sakamoto. “About one month ago, it would have been hard to imagine today’s results. It took me two years to really get the ‘Matrix’ to get to where I liked. I really had to focus on practicing and practicing and figuring out how I could repeat this. This summer, I was struggling, but made a strong decision to remain focused.”

While Sakamoto was able to demonstrate that she can lay down a good program, she realizes that there are things that are not perfect in both programs. Her jumps are not as consistent as she would like and she chalks this up to “slowing down.”

“I really need to work on that,” she said, adding that she also wants to work on her components. “If I can skate with speed, I’ll do better on the jumps and this is something I will focus on when I get home.”

“At Skate Canada, my free skate gave me confidence,” she added. “I was able to do that in the short program here, and little by little, my triple Axel success rate is getting better. I want to work on my spins and steps so I can show a clean program at nationals.”

The skater from Kobe revealed that her free skate to “No More Fight Left In Me” and “Tris” has a “strong message” and that it was a struggle for her to adjust to skating to this kind of music which she found challenging.

“It’s about a woman’s strength, internal strength, that is hidden within,” explained Sakamoto. “I hope people can sense that through my skating. I asked Benoit to work with me on the choreography as it was really challenging.”

Kawabe, who stood in second after the short program, finished fourth in the free skate (131.56). She took a fall on an attempted triple Axel and received an edge call on the triple flip. The 16-year-old still managed to land a total of six clean triple jumps, including a good triple Lutz-triple toe. The combination spin received a level four but the the other two spins and footwork were graded a level three. With a new personal best total score of 205.44, she was able to maintain second place overall.

“After I missed my triple Axel, I was able to change and focus and was able to achieve my personal best,” said Kawabe. “The morning of my short program, I wasn’t doing that well, but because I was able to succeed, I really wanted to succeed in the free skate as well. I think beyond this big stage, and being able to put on a good performance has given me confidence.”

When asked about the possibility of going to the Olympics, the Kawabe acknowledged that she doesn’t have a log of experience on the senior circuit and was just very grateful for this opportunity.

You fell on both triple Axels attempts in the short and long program. In her free skate, she also underrotated the back end of a triple Lutz-triple toe and double Axel-triple toe. However, the triple Lutz-Euler-triple Salchow was very good as was her level-four combination spin. In all, she landed five clean triples and placed second (135.52) in the free skate and third overall (203.60).

“I feel disappointed, but am happy that I landed more triple jumps,” said the 2020 Four Continents silver medalist. “My goal is to just get to nationals with no injuries and take care of my body and if I will do well, make it to the Olympics.” She likes training in Colorado as it helps with stamina due to the altitude.

Liu, who portrays a bird in her free skate to “Violin Concerto in D, op. 35” by Petr I. Tchaikovski, struggled with underrotations in several jumps to finish third in the free skate (135.18). In all, the 2020 World Junior bronze medalist landed three clean triple jumps, but showed very good spins and footwork. She slipped off the podium to fourth overall (202.90).

Her goal in the near future is to go to university. She also told the press that she likes to go on bike rides and spend time with friends to relieve pressure.

Eunsoo Lim of South Korea opened her free skate with a triple Lutz, but didn’t add the triple toe for the combination. She then omitted a planned triple flip-double Axel sequence and also turned out the landing of a triple Salchow. The 18-year-old from Gyeonggi-Do finished sixth (121.45) in the free skate, but was able to maintain fifth overall (186.68).

“There was something on the ice so I couldn’t jump,” said Lim of the second planned jump pass. “Unfortunately, I had to skip the jump and I was really shocked as I didn’t expect that. Starting the program I was thinking about the flip, but there was no space for it. I tried my best to make other things happen.”

Japan’s Rino Matsuike turned out the first jump in a triple Lutz-double toe combination, stepped out of the back-end of a triple Salchow-double toe and underrotated a triple flip. However, both double Axels, triple loop, and triple Lutz-triple toe-double toe were clean and the 2020 NHK Trophy bronze medalist showed good level four spins. She finished fifth in the free skate and moved up one spot to sixth overall (122.83/186.17) .

“I dropped some component scores so I was disappointed,” said the 17-year-old from Nagoya, “but I was able to enjoy the atmosphere of the venue. It was not tears of disappointment. I want to have a strong resolve this season so I don’t have regrets.”

Matsuike also expressed that she was disappointed in herself that she was in the last group while her teammates were in the first, and wants to do better. The skater said that leading up to the competition it’s been difficult due to her foot injury, but she’s stronger mentally.

“I was really fighting for every point,” said Schott of her free skate. “This season it is really important to me to reach the points the German Olympic committee set for me. I have to reach 175 once or 172 twice and I reached the 172 here and it is a big relief!”

Headliner Daria Usacheva of Russia took a fall during the six minute-warm up for the short program and withdrew due to an “upper-leg” injury.