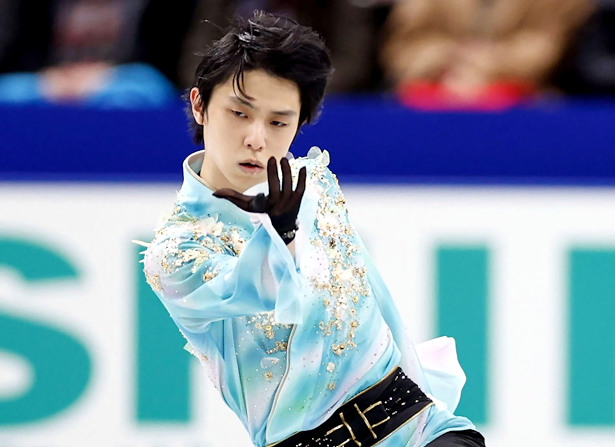 Yuzuru Hanyu performs his Free Skate to “Heaven and Earth (天と地と)” at the 2021-22 Japanese Figure Skating Championships in Saitama.

Hanyu stood in first after an excellent two-quad Short Program (111.31). In the Free Skate, he attempted the highly-anticipated quadruple Axel, but it was underrotated and the landing was two-footed. However, the rest of his “Heaven and Earth” routine was flawless and included a quad Salchow, quad toe-triple toe, quad toe-Euler-triple Salchow, two triple Axels, and brilliant level-four footwork and spins. With the exception of the quad Axel, all elements were littered with high grades of execution (GOE) and he finished first overall (193.94/322.36).

Uno also had a very good Short Program (101.88) with two quads going into the Free Skate, but took a fall on a quad toe in his routine to “Bolero.” He otherwise landed a quad loop, quad Salchow, quad flip, quad toe, and two triple Axels. While all the spins were graded a level four, the footwork was a level three and he finished third in the Free Skate (193.94). With a total score of 295.82, he managed to hang on to second overall.

Kagiyama stood in third (95.15) after the Short Program after a fall on a quad toe. However, he gave a near-clean Free Skate to music from Gladiator which featured a quad Salchow, quad toe-triple toe, and quad toe, but he stepped out of the second triple Axel. All spins received a level four with the final two receiving many high GOEs while the footwork was graded a level three. He finished second in the Free Skate and third overall (197.26/292.41).

Kao Miura moved up one spot to fourth overall (276.16) after placing fourth (183.35) in in the Free Skate in his sophomore appearance at this event. The 2021-22 National Junior champion stepped out of his opening quad loop, but landed a quad Salchow, quad toe, quad toe-triple toe, and two triple Axels in his routine to music by Vicente Amigo. There were no flips or Lutz jumps in his routine and two spins and the footwork were graded a level three.

Kazuki Tomono performed to music from La La Land for his Free Skate which featured a quad toe-double toe, quad Salchow and quad toe. He turned out the landing of a triple Axel in combination with a underrotated double salchow (which he also stepped out of), but the solo triple Axel was good. All spins garnered a level four while the footwork was a level three and the 2021 Rostelecom Cup bronze medalist finished fifth in the Free Skate and overall (175.88/263.67).

Sena Miyake landed a quad Salchow-double toe, but stepped out a quad Salchow and fell on a triple Axel in the Free Skate. The 2020-21 National Junior bronze medalist from Yakage, Okayama, finished sixth overall (162.30/252.82).

Shun Sato landed a quad Lutz, but the quad flip received an edge call. The 2021 Internationaux de France silver medalist also put a hand down on a quad toe in combination with a double toe and stepped out a quad toe. He then took a hard fall on a triple flip combination and finished seventh overall (164.86/252.13).