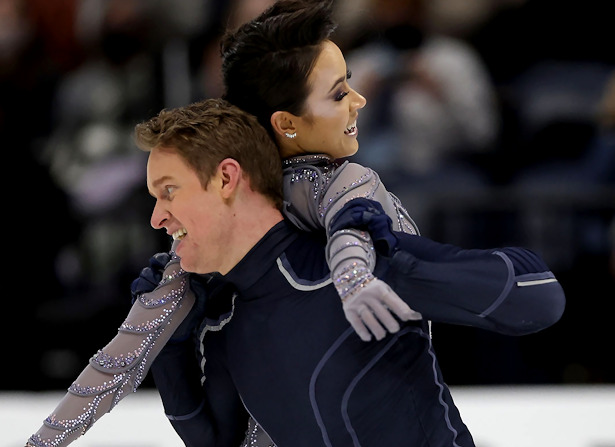 Chock and Bates, who were first after the Short Dance, delivered an excellent performance to music by Daft Punk, weaving an ethereal story about an astronaut and alien. The team, who took silver at both Grand Prix events this season, showed solid level-four twizzles, lifts, one-foot steps, and diagonal steps, earning many many positive grades of execution (GOE) throughout. The two-time Four Continents silver medalists finished second in the free skate (135.43), but with a total score of 227.37, maintained first overall.

“It feels really good to be sitting here right now and to have won the national championship again against some of the toughest competitors that we’ve ever faced, year after year after year,” said Bates. “We really had to work hard for it and I think the training and preparation, we needed all of it because it wasn’t easy. It wasn’t necessarily the best performance that we dreamt of, but we are really proud of all the work and it showed up.”

“I’m so excited and honored to share the podium with these amazing people,” added Chock. “My training mates, I love you guys so much and I’m so proud of you!”

Hubbell and Donohue were stellar in their endearing and flowing performance to “Drowning” by Anne Sila. In what was their last free dance at nationals, the team showed excellent level-four lifts, twizzles, and circular steps, but the one-foot steps were graded a level three. The 2021 World silver medalists earned many high GOEs throughout and finished first in the free dance with 136.20. However, their overall score of 225.59 was not enough to move them up.

“For Zach and I tonight, our performance meant a lot to us,” said Hubbell. “We wanted to end our career here at the U.S. Championships with a performance that felt present and we’re both very satisfied with how we skated. I think stepping off the ice, we knew we were content with what we put out there. The competitor in us at the end of the event was ‘Oh I’d really like to be first!’, but at the same time, being realistic with ourselves, we knew coming in that we wouldn’t be able to win the national championships with a bad skate with the competitors we have.”

“So it is the reality that we couldn’t make up the two and half points from a poorly skated [rhythm dance],” she continued, “but we are really satisfied with the feeling we left this championships with. We feel very prepared for what’s coming in Beijing and we’re just excited to keep the ball rolling and share another moment like that on the ice in a couple weeks.

Hawayek and Baker moved up one spot after the short dance to third overall (126.29 / 205.68) after their free dance to music by Chopin. The 2018 Four Continents Champions delivered very good level-four one-foot steps, twizzles, and two lifts, but the stationary lift was graded a level three.

“This means so much to us,” said Hawayek. “It has not been a straight journey to this for us whatsoever over the last four years, especially over the last six months. I think both Jean-Luc and I have leaned into each other more than ever and we’ve found such a deep trust in one another through the challenges and obstacles we’ve overcome. To be able to get the bronze today is just a culmination of emotions for everything that we’ve been able to accomplish.”

“We definitely left some points on the table yesterday,” she added. “We know we can absolutely increase the performance full circle for both programs, but today we are thrilled and we are incredibly proud to be here. Part of the journey is being able to be on the podium with these two teams. We train together every day and it’s really special.

“We skated well! I’m really happy with how we skated today,” said Parsons, adding that nothing else was in their control. “I’m really proud of Caroline and I think it’s the best skate we’ve put down this year.”

“I think we just wanted to go into this program for ourselves and honor everything that we’ve created,” added Green. “That was the intention we had at the beginning of the season and the skate was representative of that.”

Emily Bratti and Ian Somerville, who just teamed up in July, placed fifth (187.98) in their debut at this event. Katarina Wolfkostin and Jeffrey Chen finished in sixth place (187.27) followed by Christina Carreira and Anthony Ponomarenko (185.82).