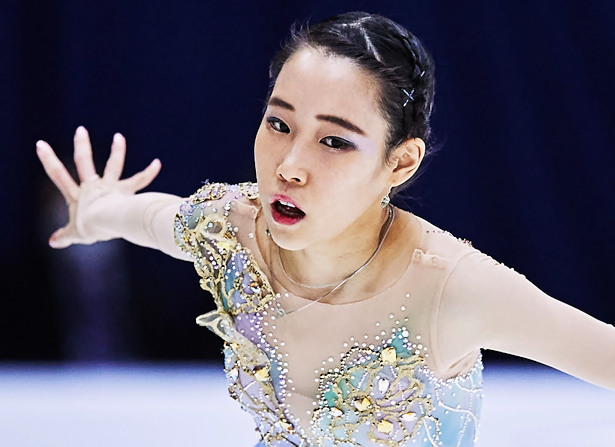 Japan’s Mai Mihara reclaimed the Women’s title at the Four Continents Figure Skating Championships on Saturday in Tallinn, Estonia. Haein Lee of South Korea maintained second place to win the silver in her debut at this event, while teammate Yelim Kim earned the bronze.

Mihara gave a near-perfect performance which featured seven solid triple jumps, including two triple Lutz combinations, in her routine to “Fairy of the Forest” and “Galaxy.” The 2021 Asian Open Trophy Champion’s only mistake came at the very end with a flawed flying camel combination spin. All jumps received many positive grades of execution (GOE) as did two of her level four spins and footwork, and she finished first in the free skate with 145.41 and overall (218.03). All three scores at this event were new personal bests for the skater from Kobe, Hyogo.

“I am incredibly happy now,” said the 22-year-old. “I was so nervous today, maybe because I was skating last. I was crying even before I went on to the ice, but I was so happy to be here representing Japan. There was a lot going on in both in my short program and free skating, but I’m glad that I was able to skate until the very end of my program. I really want to thank the audience whose support gave me strength.”

Mihara was very disappointed about not making the Olympic team, but wanted to participate at the Four Continents and was happy to have been selected.

“I started training since the first of January and am very happy that I could skate,” she said. “I got a lot of messages and letters and I was well supported, surrounded by very warm people, and it showed me how lucky I am. I was happy to come back.”

Lee was also solid in her free skate to “Homage to Korea” by Ji Pyeong Kwon, landing a total of seven triple jumps, including two triple Lutz combinations. All spins and footwork were graded a four and the two-time national bronze medalist finished second in the free skate and overall with new personal best scores (143.55/213.52).

“I’m super happy!,” said the 16-year-old. “Last time I came here, in my free program I had one mistake, so it was really sad, but this time I’m doing well and I’m very happy. It’s an honor to me to compete at Four Continents, so before I came here I wanted to do my best, and now I did my best.”

The skater opted not to do the triple Axel in free skate as she wanted a more “safe and stable” program. Her next competition will be Junior Worlds.

“Junior Worlds is the very last competition of the season, so I want to show the best performance I can for the fans and the ones who love me,” said Lee.

Kim was also clean in her skate to “Violin Fantasy on Puccini’s Turandot” by Vanessa Mae which featured seven triple jumps. While the 18-year-old finished fourth in the free skate (personal best 140.98), she had the third highest program component scores and was awarded a level four for her three spins. With a total score of 209.91, she managed to maintain third overall in her third appearance at this event.

Kim gained confidence in this competition going into the Olympics.

“It was very close between the nationals and here and I was worried about my condition,” she confessed. “I got a clean program today, so it’s confidence. It’s all about the quality—jumps, spins, steps. I think I need more work on steps and spins as I lost a level yesterday.”

USA’s Audrey Shin also scored a new personal best (136.66) for a fifth-place finish in the free skate after her routine to “Moonlight Sonata” by Beethoven. Her program featured seven clean triple jumps and level four spins and footwork. With a total score of 203.86, the 2021 Lombardia Trophy bronze medalist placed fourth overall in her debut at this event.

“I think I was very focused for this competition and I think I did a good job of staying in my own bubble and just focusing on myself,” said the 17-year-old. “Focusing on my own technique and my skating really helped a lot for this competition. Being here means so much, especially after Nationals. I’ve always wanted to compete at Four Continents. It was a quick turnaround!”

Shin feels this event is also a bit confidence booster for her going into next season.

“I’m just going to try and work hard on everything, improving my jumps even more,” she said. “Getting new programs is so exciting. Before I got injured the last year, I was working on triple Axel and quad toe and it was honestly pretty close, a quarter turn cheated, and I was landing them. Unfortunately, I got injured and that held back everything else. I really hope that I can go back home and start working on it, first on the harness to be safe, and then off the harness.”

Japan’s Rino Matsuike , who stood in eighth after the short program, finished third in the free skate and fifth overall with new personal best scores (142.05/202.21). The only mistake in her routine to “Moonlight” by Victoria Tocca was an edge call on a triple flip. She otherwise landed six solid triple jumps and showed good level-four spins and footwork.

“This season at NHK, Rostelecom and Nationals, I had a lot of regrets,” explained Matsuike of her tears. “Here, in the short program, I made mistakes and was down. I was crying and really under pressure, but I was able to push myself, and today’s performance was good. I’m so happy! My coach told me I have trained well and done everything I can, so she told me to keep calm and that’s what I did.”

The 17-year-old from Nagoya was thrilled to have reached the 140-mark in her free skate as well as exceeding the 200-mark in the total score.

“This season I had very few clean programs, so next season I want to skate perfectly clean,” said Matsuike regarding adding the triple Axel. “There are many skaters who jump a triple Axel and a quad, so I would like to make that challenge.”

South Korea’s Young You finished seventh in the free skate and slipped from fourth to sixth overall (130.70/198.56) after her routine to music from Les Miserables. The 2020 Four Continents silver medalist fell on an underrotated triple Axel and again on a double Axel-triple toe combination. However, she managed two solid triple Lutz combinations and earned a level four on two of her spins.

“It was a new experience today, so I will work harder for the next competition,” said the 17-year-old who will be competing in the Olympics. “My goal is to not do anything I would regret and hope I can do the best performance there. I am trying to prepare without injuries. I want to bring my condition to the highest level.”

Yuhana Yokoi of Japan rose from 12th after the short to seventh after placing sixth in the free skate  (131.41/185.34). The 21-year-old from Nagoya was solid in her skate to a Queen medley and landed a total of six triple jumps, including two triple Lutz combinations.

“The music is very exciting, so I just wanted the judges and audience to enjoy my performance,” said Yokoi. “Every competition I try to learn from events and to do better but it doesn’t always go well. I wanted to skate with a smile, even if I make mistakes. Of course, a clean and perfect program is ideal, but I was able to embrace everything despite mistakes. I didn’t run away, even when things got tough. I did that several times and I’m proud that I persevered. I was able to push myself so this would be a good lesson learned from the season.”