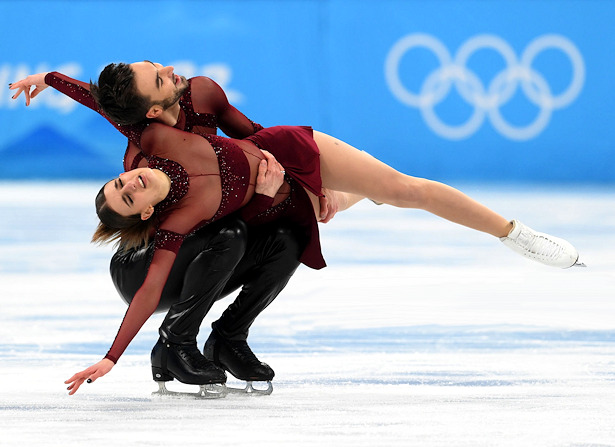 France’s Gabriella Papadakis and Guillaume Cizeron compete in the Rhythm Dance of the figure skating event during the Beijing 2022 Winter Olympic Games at the Capital Indoor Stadium on February 12, 2022.

The Ice Dance event for the 2022 Winter Olympics kicked off with the Rhythm Dance on February 12, 2022, at the Capital Indoor Stadium in the Haidian District of Beijing. Gabriella Papadakis and Guillaume Cizeron of France took the lead by less than two points ahead of Victoria Sinitsina and Nikita Katsalapov (ROC) and USA’s Madison Hubbell and Zachary Donohue.

Papadakis and Cizeron broke their own Rhythm Dance record from 2019 NHK Trophy with a new personal best of 90.83 after their Hip-Hop and Blues dance to music by John Legend. The defending silver medalists displayed excellent level-four twizzles and were strong in their level-three pattern and midlines steps. The team also received a level four for the Midnight Blues pattern steps, which met all key points, as well as their ending stationary lift. All elements received very high grades of execution (GOE) with no less than +3.

Cizeron said they were relieved as they were feeling “stress” to perform well. However, he was very happy to have given a good performance.

“We had a wonderful time tonight,” he said. “We really skated the way we wanted to. That was one of our main goals, to enjoy ourselves and enjoy the moment. We have 17 years of experience together to lean on. That’s what we did tonight.”

“We like to be positively superstitious,” added Papadakis of their history in skating in China. “We’ve always skated very well in China, and why should it be different this time? So we’re really happy with our result.”

Sinitsina and Katsalapov put out a fun and confident performance to ” You Can Leave Your Hat On” and “Brick House.” The twizzles, rotational lift and Midnight Blues pattern steps all received a level four, while the pattern type and midline steps were graded a level three. The 2021 World champions also received loads of high GOEs on all elements and finished a close second and new personal best of 88.85 points.

“We’re extremely happy with our skating,” said Katsalapov. “It was inspired and it was clean. Now we have time to catch our breath. Tomorrow we have a day where we can (train) our free skating program, and then on we go.”

When asked, Sinitsina didn’t necessarily feel like the skate they gave in the Team Event was a “warm-up.”

“But it was a chance to test the ice, test our feet, to sense the ambience,” she said. “So today when we came here to skate individually, I felt extremely comfortable.”

Hubbell and Donohue also earned a new personal best (86.56) for their Hip-Hop and Blues routine to music by Janet Jackson. The two-time and current world champions displayed very good level-three midline and pattern steps, as well as an excellent level four stationary lift, but the Midnight Blues steps were graded a level three in which only three of the four key points were met. They currently sit in third.

“We had our season’s best in the team event,” said Hubbell. “We made a point of not really looking at the protocol, and trusting our coaching staff to guide us in the right direction over the last week to give a better performance and get yet another season’s best. So we’re very pleased.”

Teammates Madison Chock and Evan Bates didn’t fare so well in terms of GOEs on the level-three Midnight Blues pattern, but the curve lift and twizzles were graded a level four and racked up many high GOEs. While the level-three pattern type steps were strong in their routine to music by Billie Eilish, the team only received a level two on the midline steps. The two-time Four Continents silver medalists scored 84.14 points for fourth place.

“I think we have some mixed feelings about the performance,” admitted Bates. “Mostly it was really good. We really wanted to have fun and show this unique program, this modern music, and I think we have at least one small mistake that probably cost us some points. So that was the mixed feeling, but it’s not over yet. We have a great free dance we’re looking forward to.”

“I was a bit disappointed when we saw the scores,” said Chock. “It was a bit lower than we hoped and we need to look at the protocol and see where we lost levels. And that was probably what it was, and it’s not over yet.”

Alexandra Stepanova and Ivan Bukin (ROC) delivered an entertaining routine to music by the Backstreet Boys in which the straightline lift, twizzles, and Midnight Blues steps were all graded a level four. The pattern and midline steps were graded a level three and the 2022 European silver medalist finished fifth with 84.09 points.

“Everything worked well,” said Stepanova. “We really enjoyed our skate. When we stood in the first pose of the dance, we just felt all the nerves going away. We were able to feel the performance and live in it.”

Canada’s Piper Gilles and Paul Poirier put out a fun routine to music by Elton John which featured level-four twizzles and rotational lift. She was a graded a level two on the pattern steps, while his were a three and the midline steps were a level two. The level-four rotational lift garnered many high GOEs and the 2021 World bronze medalists scored 83.52 for sixth place.

“We had a really good performance,” said Poirier. “We felt in the team event is was conservative. This one we has a small check in the twizzle, but I think it was much stronger performance and we improved on our score even with the small mistakes. We are really proud of ourselves and we had a blast!”

Charlene Guignard and Marco Fabbri of Italy scored 82.68 points for their Michael Jackson routine which featured level four twizzles and stationary lift. However, the Midnight Blues steps were only graded a level two. They are currently seventh.

Laurence Fournier-Beaudry and Nikolaj Sorensen of Canada are in eighth (78.54) place going into the Free Dance, followed by Olivia Smart and Adrian Diaz (77.70) of Spain, and Great Britain’s Lilah Fear and Lewis Gibson (76.45).