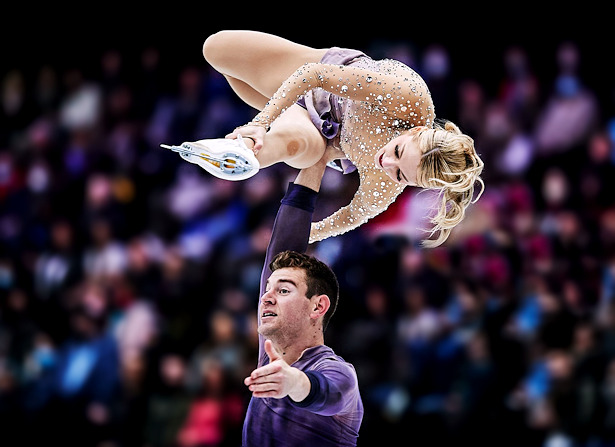 USA’s Alexa Knierim and Brandon Frazier maintained their overnight lead to win the Pairs event after the Free Skate at the 2022 World Figure Skating Championships on Thursday in Montpellier, France. Riku Miura and Ryuichi Kihara pocketed the first Worlds silver medal for Japan in their debut, while Canada’s Vanessa James and Eric Radford moved up from fifth to earn the bronze. USA’s Ashley Cain-Gribble and Timothy LeDuc, who stood in a close second after the short, had to withdraw after Knierim hit her head during a fall.

With the absence of strong pair teams from China and Russia, the three spots on the podium were up for grabs. China elected not to send any athletes to the event, while the Russians have been banned from competing. At the end of the day, the United States took its first gold in the Pairs event since Tai Babilonia and Randy Gardner won in 1979.

Knierim and Frazier, who were last to skate and trying to stay focused after their teammates’ withdraw, put out a strong performance to “Fix You” by Coldplay. The Grand Prix of France bronze medalists produced a triple twist, triple toe-double toes, a solid throw triple loop and throw triple flip, and side-by-side triple Salchows. All spins and lifts were graded a level four and the team earned a new personal best score of 144.21 for the Free Skate and overall (221.09).

“We couldn’t have asked for a better ending of the season,” said Frazier. “It has been such a journey for us. It is an amazing feeling and it is the result of the hard work we put in together.”

“I had so many emotions, I can’t even explain it,” Knierim said of her reaction after the free skate. “It was so much gratitude, fulfillment, excitement and disbelief. It was magical.”

“This is very surreal,” Frazier said. “The result shows that Alexa and I have put in the work. We were ready for anything. Our hearts go out to [Ashley and Timothy] – they’re our friends first, competitors second, so we were naturally really concerned to see what was going on with them. We wish them all the best.”

Miura and Kihara who stood in third after the short, had a rough skate in their routine to “Woman” by Shawn Phillips. They were off to a decent start with a triple twist, but the team struggled with their side-by-side jumps. While the throw triple Lutz was solid, Miura fell on the throw triple loop. Two lifts and both spins were graded a level four and the 2021 Skate America silver medalists finished third (127.97) in the free skate. However, with a total score of 199.55, the were able to take the second spot on the podium.

“We wanted to show the best performance today, but since we came back to Canada after the Olympics, our conditions were not very good,” shared Kihara. “This was not the goal. Of course we are gutted, so next season we want to come back strong.”

“Now we secure the medal, but I don’t think our performance was worth winning a medal today,” said Miura. “We regret our performance today, so next season I want to push ourselves hard and to the very end and we want to practice hard.”

James and Radford put out a good performance to finish second (130.78) in the free skate. Radford underrotated the second jump in the side-by-side triple toe-double toe-double toes, but the solo triple Salchows, throw triple Salchow, and throw triple flip were clean. While all lifts were graded a level four, the death spiral and pair combination spin were graded a level three. With a total score of 197.32, the 2021 Autumn Classic silver medalists claimed the third spot on the podium.

“We feel amazing to have this skate at our first worlds here in France,” said Radford. “It was an incredible and an unforgettable experience for us. Even as experienced competitors as we are, I think the technical aspects were there today. It was a big accomplishment and we got to really release and feel this program, skate from the heart and that’s the best.

“It feels like everything is coming together just when we needed to,” said James, adding their concern for Cain-Gribble and LeDuc. “We fought till the end. We didn’t just fight, we didn’t just think of the elements, we really performed and we really felt comfortable on the ice, it felt at home.”

“It felt OK,” said Berulava. “Yes, there were mistakes, physically it was difficult for me today, but we are going to continue working. The result is not bad, it’s not that we didn’t want to but it’s life. It’s sport, life is not over, we are 18 and 19 years old, so we are going to show what we can.

Minerva Fabienne Hase and Nolan Seegert of Germany came in fifth overall (189.61) after their personal best fifth-place free skate (123.32) to “People Help The People” by Birdy. He put a foot down on the triple Salchows and she two-footed and stepped out of a throw triple loop. Nevertheless, the triple toe-double toes and throw triple Salchow were clean and two lifts were graded a level four.

“Today and yesterday for the first time I was fully enjoying it to be here,” said Hase. “I took the atmosphere in and let out all the emotions. It was really relaxing. It was hard for us to get back into training after the Olympics and after Europeans. There was a lot of stress in practice and we put pressure on ourselves to do finally perform well. Finally, we were able to deliver and this is really nice. This (placement) is a really nice ending of the season for us.”

Cain-Gribble and LeDuc were off to a good start with a triple twist, but Cain-Gribble first fell on the side-by-side triple loops and then a throw triple Lutz. After the fall on the Salchow, it took a few minutes for the skater to stand up while being examined by a medical team. She was eventually carried off on a stretcher and taken to a hospital.