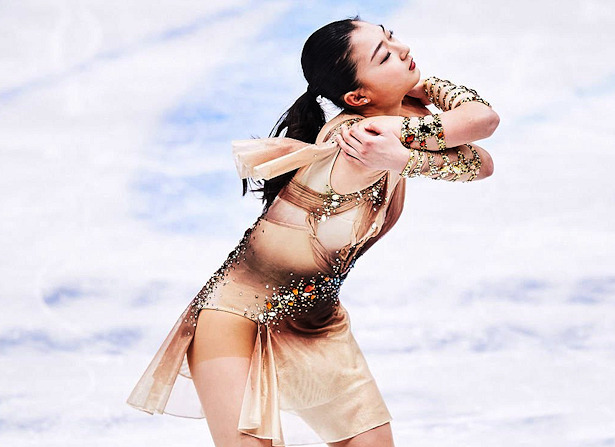 Kaori Sakamoto of Japan competes in the Women’s Short Program at the 2022 ISU World Figure Skating Championships in Montpellier, France.

The 2022 World Figure Skating Championships kicked off with the Women’s Short Program on March 23, 2022, in Montpellier, France. Kaori Sakamoto of Japan is currently in first place, followed by Belgium’s Loena Hendrickx and USA’s Mariah Bell. With the absence of very strong contenders from Russia, there is some wiggle room on the podium for other athletes.

Sakamoto gave a stunning performance to music from the Gladiator which featured a solid double Axel, triple Lutz, triple flip-triple toe. The 2022 Olympic bronze medalist earned a level four on all three spins as well as the footwork—all of which garnered many high grades of execution (GOE). She broke the 80-mark for the first time (80.32), topping her score from the Olympics last month.

“I was very speedy today,” said Sakamoto. “The jumps were a bit wobbly, but I was still able to pull them off, so it was good today.”

The two-time Japanese National Champion is still basking in the afterglow of her bronze-medal win at the Olympics, but feels she may have lost sight of her goal.

“The past three weeks weren’t that great, but Worlds is about winning three slots for the coming year,” the 21-year-old from Kobe pointed out. “I usually do poorly at Worlds, so I want to finish both short and free program with a perfect skate.

Nevertheless, she was both delighted and surprised with her score in Montpellier.

Skating to “Caruso” by Lara Fabian, Hendrickx hung onto her opening triple Lutz-triple toe and followed up with a solid double Axel and triple flip. All spins and footwork were graded a level four with positive GOEs and the four-time national champion scored 75.00 points for second place.

Hendrickx tore a groin muscle nearly three weeks ago and was unable to train until four days before coming into the event.

“I just had to trust in myself and I had a good feeling,” said the skater who took Grand Prix bronze earlier this season in Italy. “I didn’t do a lot in practice to save my body, and I think my whole team managed it well. I couldn’t do spins as well because it really hurts, but I really fought and I was trying not to think about it and I think I did a good job. But I’m more scared for the free because it’s harder and also when you get tired, your legs get tired and it’s more difficult to jump.”

“But I will do the same and just fight through my program and just not think about it,” Hendrickx concluded regarding the Free Skate. “I worked hard the whole season, so that one week off for the injury will not be the ultimate thing to bother. I have my physio with me and it’s really special because I never have like anybody else than my brother at the competition or my choreographer, so now I have three people around me and it feels like really good to know that I’m in good hands and good care.”

Bell slightly underrotated the back end of a triple flip-triple toe, but was otherwise solid in her routine to “A River Flows In You.” The national champ went on to produced a solid double Axel and triple Lutz while displaying level-four footwork and spins throughout. She finished in third with a new personal best of 72.55.

“I had a really good time,” said the 25-year-old. “I was really enjoying myself and I felt really in the moment. I wasn’t thinking too much about points or how I felt at the end… just really trying to enjoy the moment. It’s been such a long season so I’m happy.”

Bell is in touch with coaches Adam Rippon and Rafael Arutyunyan via her phone. “Rafael was just a little too tired to travel,” she explained. “He just came back from winning the Olympics with Nathan (Chen). Adam was never able to come because of his work schedule. I’m so grateful for what Rafael has given me at home and honestly there’s not much that he can do for me at a competition anyways—he gives me everything I need at home. It was just nice to have him on Facetime—it felt like he was here and I could still feel his energy through the phone!”

Skating to music from The Leftovers, Young You of South Korea opened with a very good double Axel, but slightly underrotated the backend of a triple Lutz-triple toe and triple flip. All three spins and footwork were very good and graded a level four with high GOEs, and the 2020 Four Continents silver medalist finished fourth with 72.08 points.

You admitted that the she didn’t feel good about the triple Axel this morning, opting instead for the double to focus more on the quality. The four-time national champion also said she felt a “bit tired” after the Olympics where she finished sixth.

USA’s Alysa Liu gave a confident skate to “Gypsy Dance” from Don Quixote which featured a double Axel, triple flip, and triple Lutz-triple toe. All spins were graded a level four while the footwork received a level three, and the 2020 World Junior bronze medalist scored 71.91 points for fifth place.

The skater was emotional, but later said that the tears were because she felt relieved and happy.

“I was very emotional,” said Liu. “I was pleased. It was not tears of sadness. I thought I was wrong, but the coach said nothing was wrong.”

Liu, who finished seventh in Beijing, took a week off after the Olympics. “I had a break and when I got back to skating, I was doing run-throughs, I had time to work on my programs. I didn’t have the down-time after the Olympics like many people said I would.”

Liu plans to put the triple Axel into her Free Skate on Friday. “I look forward and hope I can do it,” she said.

Nicole Schott of Germany produced a solid and polished routine to “Adios Nonino” which featured a triple flip-triple toe, triple loop, double Axel. All other elements were graded a level four and the six-time national champion sits in sixth with a new personal best of 67.77 points.

“Of course I’m very happy, this is by far my personal best,” said Schott, 25. “Also the jumps, they were all very easy and the whole program had a good flow. To be able to pull myself together again after the Games, that was hard. I would be lying if it wasn’t hard. The last weeks were hard, but I’m just trying to fight my way back to the level of the Games. That was my goal, and the fact that it worked well now, makes it all the more rewarding for the whole season.”

Japan’s Wakaba Higuchi stepped out of her double Axel and the triple flip received an edge call, but the triple Lutz-triple toe was solid. The 2018 World silver medalist is currently in seventh place (67.03).

“My double Axel went too far and my next step didn’t work out, but the rest of the program was good,” said Higuchi. “I planned to do a double Axel, but I practiced the triple Axel this morning, so I think this was the reason why I overdid it.”

She plans to do the triple Axel for the Free Skate.

The Women’s event will conclude on Friday with the Free Skate.