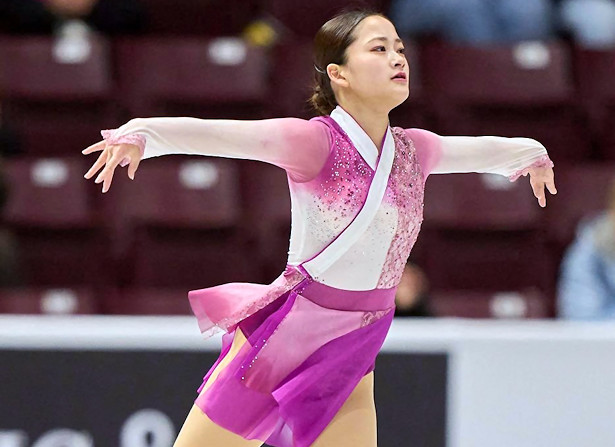 Japan’s Rinka Watanabe captured the gold in her Grand Prix debut in the Women’s event at 2022 Skate Canada on Saturday afternoon. USA’s Starr Andrews rose from fifth place to pocket the silver, while Young You of South Korea earned the bronze.

Watanabe, who underrotated and stepped out a triple Axel in the short program (63.27), rebounded with her confident free skate to music to the Jin soundtrack. The 2022 Lombardia Trophy Champion landed a triple Axel, as well as three more clean triple jumps. While the triple loop-triple toe and triple Lutz were underrotated, she earned a level four on all three spins to score 134.32 for a first-place finish in the free skate. Her total score of 197.59 bounced her up onto the podium to first overall with more than six points to spare.

“I am so happy I landed my triple Axel!” said Watanbe, adding that she would like to add another triple Axel to her free skate at NHK Trophy. “I almost fell on my last triple Lutz, but overall I am very pleased with my first Grand Prix experience.”

“This is my first time at the Grand Prix and I did pretty good,” the 20-year-old added. “I was very nervous. I was told only one week ago that I would participate and it was hard to adjust my training, but I did the best I could. I had some challenges to overcome, but did well!”

Watanabe noted that this was a very important event for her as she her only major international junior event was last season at the 2022 World Junior Figure Skating Championships where she finished 10th.

“I did compete in one Challenger series, so that’s probably why I got invited to participate in two Grand Prix events this season,” she acknowledged. “So part of me is really excited about it and part of me is wondering if I should really be here. I’m going to do what I can and what I have to do, and from then on, perhaps the results will follow, for example, the Grand Prix Final. For me, going into the NHK Trophy, I’m going to try my best. I have three weeks to prepare.”

#RinkaWatanabe 🇯🇵 #渡辺倫果 197.59 – “ I am so happy I landed my 3A. I almost fell on my last 3Lz but overall I am very pleased with my first #GPFigure experience.”
She wants to add another 3A to her LP soon and of course is dreaming of going to the WC in Japan!” pic.twitter.com/z6YqSAyG9r

Andrews delivered a solid performance to “Je suis malade” which featured five clean triple jumps to finish second in the free skate with a new personal best of 126.57 points. The only minor error was a slight under-rotation on the front-end of a triple Salchow-double loop, but all three spins and footwork were graded a level four. The 21-year-old, who stood in fifth (64.69) after the short, earned a total personal best score of 191.26.

“I am super excited and I couldn’t be more proud of what I have done,” Andrews said. “I never would have dreamed of this and I can hardly believe it!”

When asked how it felt to win being one of the few woman of color to do so in an international event, Andrews said it felt “incredible.”

“This is my first medal at a Grand Prix and I felt amazing,” she said. “I think that it is a huge deal, especially being a woman of color, and I am so proud that I could represent them. To be able to bring home a medal is even more special.”

When she spotted the sign with her name on it in the press conference room she stared at it with disbelieve and happieness.
She also showed her freshly made nails that she got for this competiton.#StarrAndrews 🇺🇸 #SCI22 #GPFigure pic.twitter.com/yKdfiw2LRL

Skating to Vivaldi’s Four Seasons, You underrotated her triple Axel and a triple-flip (in combination with a double toe). The front-end of a triple Lutz–Euler-double Salchow was also slightly underrotated, however, the 2020 Four Continents silver medalist earned a level four on two spins. You stood in fourth (65.10) after the short, and with a total score of 190.15, was able to maintain third place overall.

“I am very happy I went for the triple Axel,” said You. “I didn’t expect a medal today because my competition was not as good as usual. When the coach told me I was third, I was really surprised and I am thankful to the crowd that they cheer me up even though the performance was not the best.”

“I picked the Four Seasons as I really liked this suggestion of my choreographer Tom Dickson,” she added. “My favorite part of it is the last part the ‘Summer Storm” at the end because it is so powerful!”

#YoungYou 🇰🇷 #유영 190.15: “I am very happy I went for the 3A. I picked the 4 Seasons as I really liked this suggestion of my choreographer #TomDickson. My favourite part of it is the last part the “summerstorm” at the end because it is so powerful!” pic.twitter.com/pZMEy5d1Gs

USA’s Ava Marie Ziegler gave a valiant effort to Adele’s “Love in the Dark,” but the 2022 Budapest Trophy Champion fell on back-end of a double Axel-triple Salchow as well as a triple Lutz. She scored 120.27 in the free skate and slipped from third (66.49) to fourth (186.76) overall.

Rika Kihira of Japan stood in eighth place (59.27) after a sub-par short in which she underrotated her triple Salchow-triple toe and stepped out of triple loop. However, her free skate to music from Titanic was solid and featured five clean triple jumps. The two-time Four Continents champion, who has struggled with injuries to her right foot and ankle, placed third (125.06) in the free skate and moved up to fifth overall (184.33).

“It was a good performance today and I wanted to carry a smile through my performance,” said Kihira. “With my injury, I am making progress, little by little, and my goal is to get all my triples back.”

#RikaKihira 🇯🇵 #紀平梨花 184.33 “It was a good performance today and I wanted to carry a smile through my performance. With my injury I am making progress, little by little and my goal is to get all my triples back.”#SCI22 #GPFigure pic.twitter.com/0BKLTOKSfF

Kihira, Schizas and USA’s Thorngren will compete again at the Grand Prix in Espoo, Finland, while teammate Watanabe is schedule to skate next at NHK Trophy along with Petrokina and Andrews. You competes next at the MK Wilson trophy in Great Britain alongside Daleman.

Skate Canada was a solo Grand Prix event for both Ziegler and Yokoi.