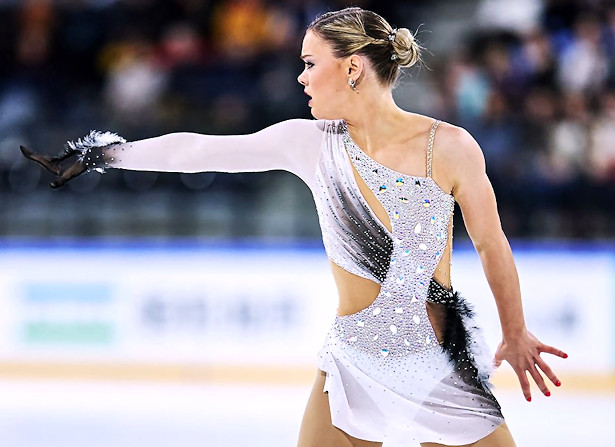 Belgium’s Loena Hendrickx dominated the Women’s event at the 2022 Grand Prix de France, taking the gold in Angers, France, on Saturday afternoon. In doing so, she became the first skater in any discipline to win a medal of any color on the Grand Prix series. Yelim Kim of South Korea held on to second overall to earn the silver, while Japan’s Rion Sumiyoshi captured the bronze in her Grand Prix debut.

Hendrickx put out a clean short (72.75), but like many other skaters at this event, received an edge call on a triple Lutz. The over-night leader produced four solid triple jumps in her free skate to “Poeta” and “Fallen Angel” along with very good level-four spins which earned many positive grades of execution (GOE). The only errors were an edge call on the front end of a triple Lutz-triple toe and solo triple Lutz. The 2022 World silver medalist scored a new personal best of 143.59 points for first place in the free skate and maintained first overall (216.34).

“It feels amazing!” said the 22-year-old. “It’s crazy that I just won gold at a Grand Prix. “It was mentally really hard, but I felt confident after my practice this morning. To skate on my birthday is a different feeling and I’m glad I could show my best and I am happy.”

“I am of course proud that I could do this for Belgium and for the sport in Belgium, and maybe more kids will start skating,” Hendrickx added.

The four-time Belgian National Champion admitted to being a bit nervous as she had made last-minute changes to the free skate after performing it for the second time at 2022 Japan Open last month.

“We were disappointed at the points I got,” she explained. “We felt the the music wasn’t strong enough and so we were looking for new music. It’s not easy and it took quite a long time and then we had to change the program.”

When asked what winning the gold meant to her, the Belgian skater said: “To me, it really means confidence. I just need to work hard and start all over and show everything I can do and just enjoy it.”

🥇#LoenaHendrickx 🇧🇪 216.43: “It feels amazing. I was a bit nervous because we changed the program last minute. But I felt good after the practice today and I am happy I was able to skate clean.
It’s crazy to have so many people wishing me a happy birthday.”#GPFigure #IDF22 pic.twitter.com/pUJVptTaWX

Kim stood in second (68.93) after a solid short with the exception of a edge call on the front end of a triple Lutz-triple toe. In her free skate to music from Summer of 42, the 2022 Four Continents bronze medalist landed three clean triple jumps, but took a fall on a triple Lutz and triple Salchow. The triple Lutz combination also received an edge call, but she showed two good level-four spins to finish fourth in the free skate (125.83). With a total score of 194.76, she maintained second overall.

“I am disappointed with myself today with the performance I gave, but I am still happy and grateful I won second place,” said the 19-year-old. “I’m going to try hard and hope to do better at NHK Trophy. This is my third season on the Grand Prix circuit and my first medal. I am very happy about to win a medal, but for the mistakes I made today,  I’m going to practice more and try to do better.”

🥈 #YelimKim #김예림 🇰🇷 194.76: “I am disappointed with myself today but I am still happy and grateful I won second place and I hope to do better at #NHKTrophy.”#GPFigure #IDF22 pic.twitter.com/o9eumtuYFR

Sumiyoshi earned all new personal best scores throughout this event in her Grand Prix debut. The national junior silver medalist stepped out of an underrotated triple Lutz, but produced a triple flip-triple toe in the short (64.10) for fifth place. The 19-year-old fell on an attempted a quad toe in her free skate to “Enchantress” and underrotated the back end of a triple flip-triple toe, stepped out of a triple flip, and turned out the landing of a triple Salchow, but showed level-four spins and footwork. She finished third in the free skate (130.24) and overall (194.34).

“The skate wasn’t my best, but I was able really able to enjoy this competition and I am happy I got third place,” said Sumiyoshi. “I started practicing the quad to last summer, and at that point my success rate was not very good. This year, I was really able to elevate my success rate is about half in terms of landing or stepping out.”

“I was very happy that I was awarded with the Grand Prix assignment and it really boosted by confidence,” she added. “I believe that I can take this confidence towards the NHK Trophy where I want to do my quad jump, as well.”

Sumiyoshi also revealed that her free skate costume is her personal favorite.

#RionSumiyoshi #住吉りをん 🇯🇵 194.34 – Tried a 4T, that was brave! Despite a fall there she delivered a clean skate after that! 👏🏻 She told us, that her FS costume is her personal favourite costume! 🧚‍♀️ pic.twitter.com/V2X9Thh0IY

Haein Lee of South Korea took a fall on a planned triple loop in the short, but landed a triple Lutz-triple toe to score 62.77 points for sixth place. In the free skate, the 2022 Four Continents silver medalist gave a strong skate to music from Phantom of the Opera which featured four triple jumps, but she fell on an underrotated triple flip. The 17-year-old finished second in the free skate (130.72) and rose to fourth overall (193.49).

“I was pretty sick during Skate America and didn’t do good there,” Lee shared. “I think my stamina is still not good, but regarding these circumstances, I think I did well today.”

The skater, who is taking a break from the triple Axel for now, will compete next at nationals.

#HaeinLee #이해인 🇰🇷 193.49 “I was pretty sick during #SkateAmerica and didn’t do good there and I think my stamina is still not good. But regarding these circumstances, I think I did well today.” pic.twitter.com/OhUw99EzHT

USA’s Audrey Shin scored 64.27 points for a fourth-place finish in the short in which the only mistake was an underrotated triple loop. The 2020 Skate America bronze medalist finished fifth (119.66) in the free skate where she showed good level-four spins and footwork, but underrotated several jumps and fell on a triple Lutz. The 18-year-old finished in fifth place overall with a total score of 183.93.

Japan’s Mana Kawabe landed a solid triple flip in the short, but received an edge call on a triple flip and stood in third (68.83) going into the free skate. However, in the free skate the 2020 Skate America bronze medalist struggled with most of her jumps, falling on the triple Lutz-triple toe combo and triple loop to finish eighth (113.67). She slipped to sixth overall with a total score of 182.50.

In the Grand Prix standings, Lee earned nine points for a total of 18 points as she picked up nine points at Skate America. Hendrickx (15) and Kawabe (5) will compete next in Espoo, Finland. Kim (13), Sumiyoshi (11), Shin (7), and Mikutina will share the ice again at NHK Trophy.