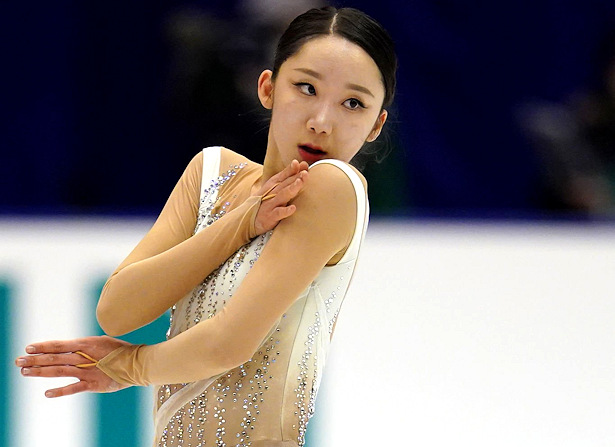 Kim stood in first (72.22) going into the long program

The 2022 Four Continents bronze medalist landed a total of five clean triple jumps in her routine to Summer of 42, including a triple Lutz-triple toe. However, she put a hand down on her first triple flip and fell on the next one. Nevertheless, she produced two level-four spins and good level-three footwork to finish second (132.27) in the free skate. With a total score of 204.49, the 19-year-old edged out the Sakamoto to win her first Grand Prix gold medal.

The second flip she fell on was planned to be in sequence with a double Axel. “So I did the double Axel with the triple Salchow, like I do in practice,” Kim explained.

“I still can’t believe I achieved first place and I am so, so happy today. I think I’m going to cry!” said Kim. “After the short program, I tried thinking that nothing was different regarding skating last. I tried doing just like in practice.”

Kim said that the younger skaters that qualified in the Junior Grand Prix Final motivated her to keep fighting as they “are achieving higher and higher scores.”

🥇#YelimKim 🇰🇷 #김예림 204.49: “I still can’t believe I achieved first place and I am so, so happy today! After the SP I tried thinking that nothing was different regarding skating last. I tried doing just like practice.”#NHKTrophy #GPFigure pic.twitter.com/ADomSCcfiw

The 2022 Olympic bronze medalist slightly underrotated both jumps in a triple flip-triple toe (step out) and received an edge call on her solo triple Lutz. She also popped a triple loop in the second half her program, but managed three clean triple jumps. All spins were graded a level four, while the steps were graded a level three in her routine to with her routine to Sia’s “Elastic Heart.” The mistakes were costly, and with a total score of 201.87, Sakamoto missed the top of the podium by just over two points.

“I popped the very last jump, but overall I did everything I could at this moment this season,” Sakamoto said, revealing that she had overcome a cold following Skate America. “Coming into this season, I really wanted to do my best. Inside myself there was an angel and a devil fighting each other. I want to overcome the devil. It tells me, ‘you gave your best last year, this season you can relax.'”

Sakamoto trains often with many of the junior skaters, and it’s not lost on her that they will be a force to reckon with.

“I see that they have very high quality and they are competing at a very high level,” she said. “And also at competition they are able to perform at the high level. I see how good their practices are.

But unfortunately because of the pandemic, they didn’t have the possibility to gain enough experience and ranking points internationally. The Juniors are at the highest level ever, so I think there is a bright future for Japan.”

On balancing her training and education, Sakamoto says she does not let her studies interfere with skating.

“I am in the last half of my senior year, so I am really studying hard,” she said. “But my coach told me that I have to step back from my studies if they have a negative impact on my skating. I can’t use my studies as an excuse to take time off from skating.  I have to wake up early, do a lot of studying, and then afterwards have to do a lot of training as well.”

“I feel that I’m still far away from last years condition. I felt that when I have no confidence, it has a big impact on my skating.
I was nervous, but it was better than yesterday.” pic.twitter.com/mdJGdOop7k

The 2022 Grand Prix de France bronze medalist also turned out the front end of a triple flip-double toe-double toe, however, she landed a total of five clean triple jumps. She also showed a very good level-four layback spin and level-four steps. The skater was third after the short with a new personal best of 68.01 points, and with a fourth-place finish free skate (125.11), managed to maintain third overall (193.12).

“Considering that this is my first senior Grand Prix and I got third place in both competitions, I am happy,” said Sumiyoshi. “However, regarding my performance today, there were so many regrettable points.”

Sumiyoshi now has 22 points in the Grand Prix standings. She will have to wait until after Grand Prix Espoo to see if her two bronze medals are enough to get her to the Final.

“Of course I want to get to the Final, but I also don’t want to push myself too much,” she said. “I have regrets about the outcome, but I want to try my best for the Nationals.”

She plans to brush up on her short program and spend more time practicing on the free skate.

“More than being surprised about my score, I was surpsrised about becoming first (at that time) and getting on the podium, but overall the program wasn’t good. #NHKTrophy #GPFigure pic.twitter.com/FqoOoN3C8r

#AudreyShin 🇺🇸 189.00: “I am very relieved because I felt some pressure yesterday to keep that top 4 position and I am very happy I did that. I am glad I could get the mistake at the beginning out of my mind and went through with my program!”#NHKTrophy #GPFigure pic.twitter.com/DVnmuWWSM5

Japan’s Rinka Watanabe sat in ninth (58.36) after a dismal short coming into the long program. However, the 2022 Skate Canada Champion rallied back with her free skate to music to the Jin soundtrack, landing a total of five clean triple jumps. Her triple Axel was slightly underrotated and she turned out the landing, but the spins were all graded a level four. She finished third (129.71) in the free skate and moved up to fifth overall (188.07).

#RinkaWatanabe 🇯🇵 #渡辺倫果 188.07: “There were good and bad parts in today’s program. I was able to recover from yesterday’s mistake and hope to bring the overall experience into the next competiton.”#NHKTrophy #GPFigure pic.twitter.com/k7JzEcFgnM

Both Kim and Sakamoto have qualified for the Grand Prix Final next month in Turin, Italy.