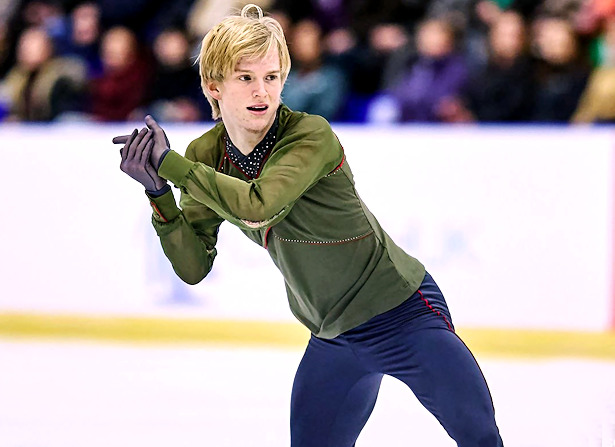 Italy’s Daniel Grassl captured the gold medal in the Men’s event at MK John Wilson Trophy on Saturday night in Sheffield, Great Britain. Deniss Vasiljevs of Lativa rebounded to pocket the silver, while Japan’s Shun Sato rose from fourth to earn the bronze.

Skating to music by Cédric Tour, Grassl landed a quad Lutz and a seven clean triple jumps. The only mistake came when he fell on an underrotated quad flip, but the 2022 European silver medalist was otherwise solid. He also racked up positive grades of execution (GOE) for his three  level four spins and footwork to score 177.50 points for a first-place free skate. With a combined score from his second-place short program (86.85), he moved up one spot to first overall with 266.35 points to win the first Grand Prix gold medal for Italy in the men’s event.

Grassl actually had another quad Lutz (in combination with a triple toe) planned for the free skate, but wasn’t “feeling it” during the six-minute warm up.

“It was a very important competition for me,” he said when reflecting that he could be the first man to with a Grand Prix gold medal. “I tried to do my job and think jump-by-jump and believe in myself and concentrate. It was hard when I was waiting, but when I got on the ice, I immediately started to jump, jump, jump and I felt better.”

Grassl now has 24 points in the Grand Prix standing and hopes to qualify for the Final, but knows he has to wait for the results from NHK Trophy and Finland. He will compete next week at the Challenger Series event in Warsaw.

Vasiljevs, who sat in third (83.01) going into the free skate, thrilled the audience with his routine to Dvořák’s Symphony No. 9. While the 2022 European bronze medalist underrotated and two-footed the quad Salchow, he landed a total of seven clean triple jumps to the cheers of the crowd. The 23-year-old also show-cased very good level-four spins and footwork and earned the highest component scores in this event. He finished second in the free skate (171.55) and moved up to second place overall (254.56) for Latvia’s first Grand Prix medal.

Vasiljev will not qualify for the Grand Prix Final, however, there is time for him to improve before Europeans and the World Championships.

“My mind is still digesting what happened,” he said. “I look forward to continuing to practice and (prepare) for whatever event will come. I enjoy the process. I really enjoy the life of athlete and pushing myself and facing those difficulties of recover, managing and many other things including my studies. There doesn’t have to be a milestone or destination, just the direction. I have a good image of where I want to go.”

On winning the first Grand Prix and ISU competition medal for Latvia, Vasiljev said: “I was here for the thrill of performance. I really enjoy figure skating, my vision of it. Performing like today, connecting with the people and getting such a warm reception, is one of those things I really cherish about our sport. That is something that warms my heart and really motivates and inspires me to continue.”

“I’m very happy today that I had the first Latvian Grand Prix medal,” he added, “but that’s not the focus that I feel the most satisfied. It’s a feeling, the standing ovation, the people cheering, the clapping… this energy is something way above, something way beyond what you get just by achieving something. It’s something you live for, something you strive for that is continuous. It’s not something that happens in 10 years and then will be forgotten. It’s something worth performing every day, something to work for. I’m very, very, very happy, particularly for this ambience, energy, power. It’s much more dear to me than any medal ever will be.”

#DenissVasiljevs 🇱🇻 🥈254.56 : “The support and the standing ovations were amazing! 👏🏻 It was such a warm feeling! I want to thank every single one of you who came out and supported me and felt my performance in their hearts!” #MKJohnWilsonTrophy #GPFigure pic.twitter.com/jtbn1Ren8r

Skating to music from “Red Violin,” Sato fell on a quad Lutz, but rallied to land a quad toe-double toe and solo quad toe. Besides the fall, the only mistakes were an edge call on a triple flip and a step-out on the landing of a triple toe. The 2022 Grand Prix de France silver medalist otherwise landed three solid triple jumps and earned a level four on all three spins and finished third (166.35) in the free skate. The skater, who stood in fourth after the short (82.68), leapt onto the podium with a total score of 249.03.

“I didn’t skate my short and free program without mistakes,” Sato acknowledged. “But even the mistakes I made didn’t affect my performance and I went through until the end. So I’m quite happy about it,” Sato said. “My next event is the Grand Prix in Finland. There will be good skaters like Ilia Malinin, and I will try to do my best to compete with those skaters.”

Teammate Koshiro Shimada, who stood in fifth (80.84) after the short, landed a very good quad toe, but tripled a planned quad Salchow in his free skate to “City Lights” from Charlie Chaplin. The 2022 Lombardia Trophy silver medalist also turned out the landing of a triple Axel in combination with a triple toe (foot down) before stepping out a triple loop. Despite the mistakes, he landed a three more clean triple jumps and produced two level four spins to place fourth in the free skate with a new personal best of 166.33 points. His new personal best total score of 247.17 moved him up one spot to fourth overall.

#KoshiroShimada 🇯🇵 #島田高志郎247.17! 👏🏻: “I am just overall happy, mainly for Deniss! And I also had my own happy moment! Amazing experience!”

Tatsuya Tsuboi of Japan rose from seventh to fifth overall (226.13). The 2022 World Junior bronze medalist fell on a quad Salchow, but landed seven clean triple jumps in his free skate to music from the High Strung soundtrack.

Tsuboi picked up seven points at this event and will compete again in Espoo, Finland, along with Sato (11), and Kvitelashvili (3).

Here are your #MKJohnWilsonTrophy medalists 😉: