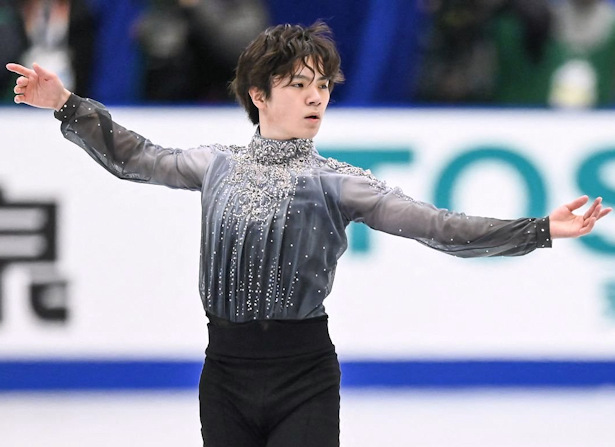 Japan’s Shoma Uno rose from second place to defend his title in the Men’s event at 2022 NHK Trophy on Saturday in Sapporo. Teammate Sota Yamamoto pocketed the silver, while South Korea’s Junhwan Cha catapulted from sixth place to snatch the bronze.

The 2022 Olympic bronze medalist landed a quad loop, quad Salchow quad toe, and quad toe-double toe in his routine to “Air on the G String” and “Sanctus Petrus et Sancta Maria Magdalena.” He also landed two solid triple Axels and earned a level four on two spins to finish first (188.10). The skater, who stood in second after the short (91.66), finished first overall (279.76) with nearly 22 points to spare.

The skater felt that it wasn’t the greatest performance in terms of a “comprehensive package” as he had to earn points through his jumps.

“When it came to transitions, there were a lot of omissions,” Uno explained. “I actually need to apologize to the choreographer because there were so many things I could have done, but I couldn’t today. It was all about the scores today. But in figure skating, the transitions are important, everything else is also important, that’s the beauty of the sport. So I really don’t want to be ignorant of that point and I want to be mindful that I could deliver the whole package.”

Uno said that “good training” is the drive and motivation that keeps him going. He will continue to train in Japan, but will travel to Switzerland for a few days before the Grand Prix Final to adjust to the jetlag.

“In Switzerland, Stéphane is there to stop me from training too much,” he added. “He is the one to stop my training. He tells me when to call it a day and stop. In Japan, I have to stop myself in order to avoid injuries, but I do push myself here more. In Champéry, I do more off-ice training than in Japan, for example ballet and physical training.”

Uno is happy that he will be joined by Kao Miura and Yamamoto at the Grand Prix Final. He trains with Yamamoto when in Japan and feels that Yamamoto puts on a very good performance.

“Because he trains so well, you are able to put on a really good performance at the competition,” said Uno. “Although he made some mistakes in the jumps, he had two quads today, I can see his potential in growing more and more. Because I am the eldest of course, I would be like to give as good of a performance as I can. I think that would also help me to push into how I interpret and how I define skating for me.”

Uno feels that his personality changes as he faces different challenges and goals, so doesn’t think of himself in terms of being a “perfectionist.” He also acknowledges that in the future, his techniques might “deteriorate” and will re-evaluate when that time comes.

“Figure skating has changed in the past years and I tend to aim for a higher ground,” he explained. “I always want to train and improve myself and that’s been the drive for me to continue to skate. That’s why I set the standards higher and higher and this year the bar has become much higher than last season. When you keep on setting a higher bar, along the way I realized, especially in the past two years, that it doesn’t always go well. It never does go as you plan.”

“Sometimes you make mistakes, sometimes you stumble,” he continued, “but you just have to need to continue to have that will to improve. But then the emotions and your physical state does not keep up with that and the gap becomes wider. That’s where you get really troubled and it’s hard to accept and digest. That’s one element of being a perfectionist. You aim to be higher and better and that’s what drove me to success at the Olympics and the World Championships. The good thing about it is, whenever I face figure skating in my definition, I have never lost that drive to improve myself.”

Yamamoto earned a new personal best (96.49) in his short program

In his free skate to Rachmaninov’s “Piano Concerto No.2,” the overnight leader landed a quad Salchow, quad toe-triple toe, and a quad toe. While he fell on both triple Axels, the 2022 Grand Prix de France silver medalist displayed good level-four spins throughout. He finished sixth in the free skate (161.36), but managed to hang onto to second overall with a total score of 257.85.

“I was nervous and still have worries regarding my Axel,” he confessed. “I need more training to become confident. I’m not good at jumping the Axel, but I want to improve and make it one of my stronger jumps. My quadruples feel stable and jumping them became fun, so that’s a good development.”

Since Yamamoto was first after the short program, he was last to skate. Thinking about his placement may have affected him, and he feels that it threw him off when a bit.

“Especially with the mistake I made where I fell on the Axel combination,” he explained. “I was overthinking about how I wanted to make my recovery for that mistake, and I realized how important these jumps with high points are. So I really need to mend them all and have a successful jump. Even if I make mistakes, I will have to be well prepared for that. So I think I need to go through more training with anticipation of the kind of mistakes I make.”

Yamamoto recalls going to the Junior Grand Prix Final with Uno in 2014, but since he’s been a senior, he hasn’t been able to put good enough results in the Grand Prix series. Uno is a role model for him and feels that will help him do better.

“I’m really happy that we get to compete together at the Grand Prix final,” said Yamamoto. “This time around, my goal was to finish as close as possible to Shoma, and I was able to do that (here). I won the ticket to the final, so that makes me really happy. But again, I need to make sure I do better at my next competition.”

The 2022 Four Continents Champion had a very good skate to music from No Time to Die from the James Bond soundtrack. The only mistakes came when he underrotated both jumps in a triple Axel-Euler-triple Salchow and stepped out of a triple Axel. He otherwise landed a solid quad Salchow and quad toe while displaying level-four spins and footwork throughout. He finished second in the free skate (174.41) and moved up to third overall (254.76).

“I feel quite satisfied about my program today!” said Cha. “I was really disappointed yesterday, but also yesterday I had tried my best to keep my program together. I tried to get back on track and do everything that I can right now. My triple Axel was still a bit shaky, but better than at past events, and I will keep working on that. I think I can keep training and recover from that point and I’m happy about my performance today.”

The skaters has been training in Toronto, but will stay in South Korea for the upcoming nationals.

#JunhwanCha 🇰🇷 #차준환 254.76 🥉: “I feel quite satisfied about my program today! I was really disappointed yesterday, but also yesterday I had tried my best to keep my program together. I tried to get back on track and do everything that I can right now. pic.twitter.com/Jjmbz5OdTr

Kazuki Tomono of Japan finished fourth overall (251.83). His free skate routine to Strauss’ “Die Fledermaus Overture” featured a quad toe-triple toe and five clean triple jumps. The only mistake came when the 2022 Four Continents silver medalist doubled a Salchow and fell on a quad toe. All spins and footwork were graded a level four and he finished third in the free skate with 166.76 points.

France’s Adam Siao Him Fa trailed Tomono with 250.45 for fifth place. His routine to music by Cédric Tour and Woodkid was highlighted by a quad Salchow and quad toe-double toe. The 2022 Grand Prix de France Champion also earned a level four on his footwork and spins for a fourth-place finish in the free skate (163.01).

#AdamSiaoHimFa 🇫🇷 250.45 showed a great fight today, but it wasn’t enough to keep in a podium position. He still has the chance of qualifying for the #GPFinal.
⬇️⬇️⬇️ pic.twitter.com/W3LRy3sJlC