Anna was asked about Zhenya's switch:
"I absolutely did not expect to see Zhenya in training, there were no prerequisites in my head, the same shock as everyone else. But we skated with Zhenya for many years, so the situation is familiar, we work the same way as before," quotes Shcherbakova. (Google translate) 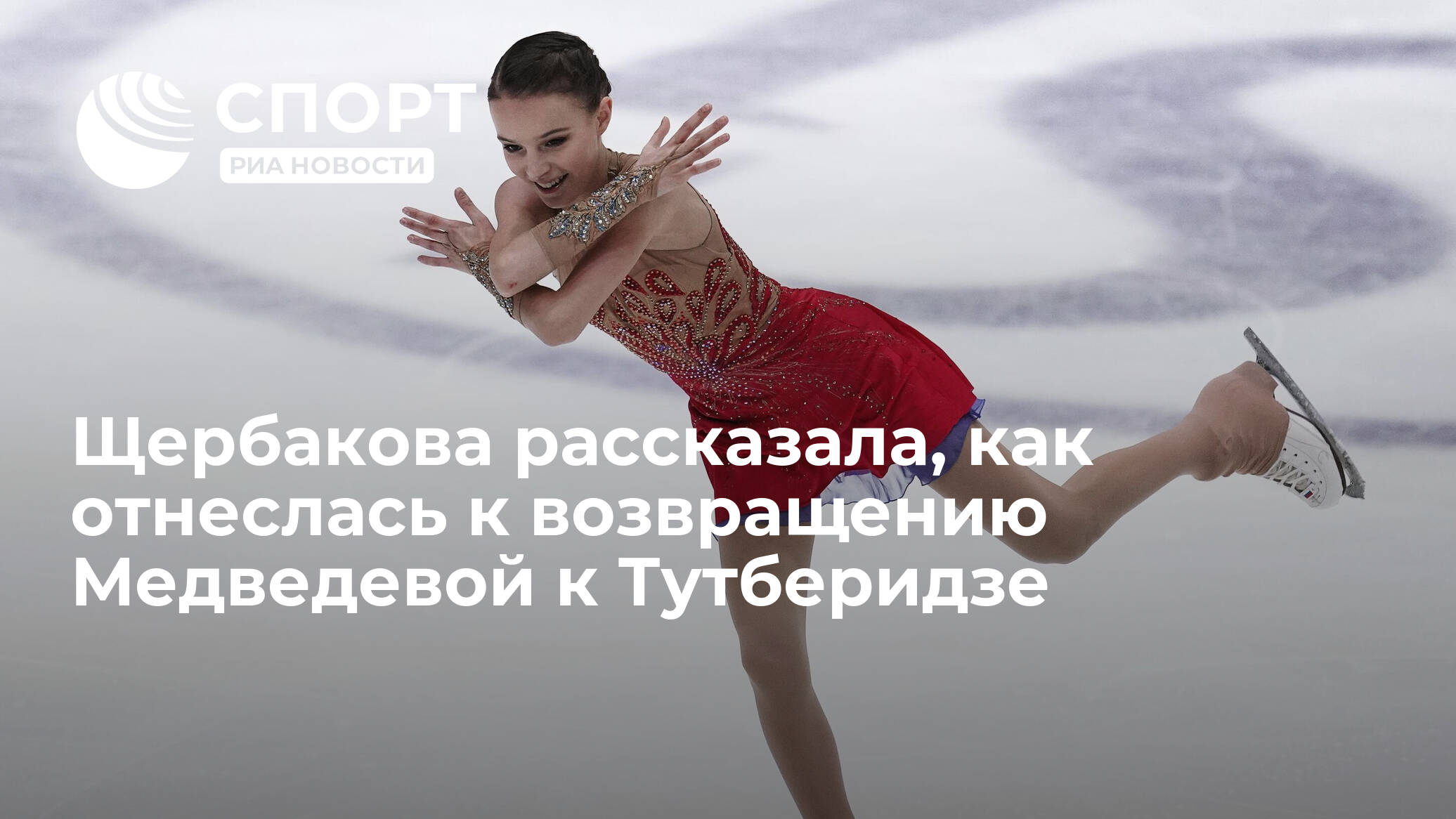 Maiia was also asked about Zhenya:

"On Wednesday, two-time world and European champion Evgenia Medvedeva returned to the group of Eteri Tutberidze, in which Khromykh trains. “The first thing that caught my eye was that she was very small,” Khromykh noted. “On the TV screen, she looks much taller. The impressions of her acquaintance are good, she works a lot.”

I love these comments. I want one from Adelya, she reminds me of a young Evgenia.

"On Wednesday, two-time world and European champion Evgenia Medvedeva returned to the group of Eteri Tutberidze, in which Khromykh trains. “The first thing that caught my eye was that she was very small,” Khromykh noted. “On the TV screen, she looks much taller. The impressions of her acquaintance are good, she works a lot.”

I guess everyone looks small next to Maiia at Khrustalny

Oh, Russian twitter... Gotta love this humor of theirs. They can into self-irony.

probably our Russian users could explain this one better (than me):

Jeanie19 said:
I love these comments. I want one from Adelya, she reminds me of a young Evgenia.
Click to expand...

They do look alike. Is Adelya Armenian, too?

Wow - they really do look alike. And the way they hold their arms and hands.

Petrosyan sounds to me like it is an Armenian name, but I don't know for sure.

I don't think they look that much alike, Petrosyan looks more like Dzepka than Medvedeva, I think. I wouldn't confuse them.

But yeah, will be an interesting season. I was quite surprised by this decision but I don't think it'll be the wrong one in the long run.

samkrut@mail.ru said:
The search of old messages works better with the new engine so that I bothered to browse through my posts here 2 years ago. I feel even stronger now about what I wrote back then:

"As for Medvedeva, so far everything is quite depressing for me. Hope about some miracle. That is what's left. She was a superstar - one and only. So far she is a shade of her former self. Once again, let's hope that she will make it up. Hope dies last.

Why I bother to write all this? Maybe because I used to be "Medvedeva's uber", because I enjoyed her skating, I wanted her to win OGM and I feel for her. May be because for me it's the embodiment of hypocrisy to speak now about improvements in her skating. Some people and not only fans already boasted those. Improvements? Give me a break. Her pcs show what judges think about improvements in her skating - downfall in all categories, all of them. Let's not pretend that something is there when it's not.

Some years ago on GS there was a huge wave of criticism towards Medvedeva from non-Russians mostly North Americans. There was a weekly fresh thread about her "issues". Now, suddenly non-Russians (I cannot say the same ones or not) have become very supportive when her skating has deteriorated. They find non-existing improvements, they say that she has better programs, they talk "long-term". I say, this is nonsense. No matter what the reasons are she and her programs so far are just a shadow of her former self. And judges see it giving her low scores that she never received before.

YEs. In that debate I was with you in 2015-2018 we defended Zhenya together , if you remember. The posters were so annoyed with her mimic, opened mouth, bad jumps, music choice, etc.,. Everything has changed when she moved to Brian. I didn't understand the motivation I said it then. Don't get me wrong I can see the changes in her skating and her personality now but I didn't give chance to her against the quadster girls. There was no room to improve in points because her PCS was in the sky with Eteri, too she couldn't beat them with PCS without quads or without 3As. So now I don't give her chance too much if the teenagers don't make mistakes. I don't talk about only the Russians. When I saw her in test skates I was amazed by her will, her performing skills. But I saw her so fragile, she was so broken.She seemed to me she lost muscles what would be understandable because she had no real training camp where the athlets can gain general stamina, endurance. The yoga and the pilates are great but isn't enough
So I believe she is a smart girl thus knows it. She just wants to gain good condition and make a good season with good skatings, the results aren't the most important. But of course she will do everything to take part of the Russian OG team again.
In Russia she is very popular she can use her popularity in the other side of the life. If she is a competitior the sponsors won't leave her what is also very important. Probably we are going to be over the Pandemic and the shows are going to be start ....
Last edited: Sep 20, 2020

Jeanie19 said:
They do look alike. Is Adelya Armenian, too?
Click to expand...

Yes. As far as I know. Petrosyan is an Armenian name.
L

Jeanie19 said:
They do look alike. Is Adelya Armenian, too?
Click to expand...

I don't know for certain but judging from her surname, yes. The ending in -ian in Armenian surnames is a relic of the patronymic naming system (son or daughter of Petros in this case).

Lunalovesskating said:
Yes. As far as I know. Petrosyan is an Armenian name.
Click to expand...

Any new practice clips? I know it’s been just a short time, but I’m wondering how she’s adjusting to the new training and how she and Eteri are getting along.

Daniil gave an interview. He talked about Zhenya (Google translate)

"How did Zhenya Medvedeva's transition happen? What are your first impressions?
- How was it? After the test skates, Eteri said that she would have a conversation, a meeting with Zhenya. After that Zhenya came to our group. Returned, let's say. We have three and a half weeks to prepare it for the first stage of the Russian Cup, we will try to improve the form that we have now, but of course we will not make any very grandiose actions during this time. I hope that progress will be more visible at the Russian championship, our work.

- Will there be any changes in the programs of Evgenia Medvedeva, which other choreographers put on her? - We will not change any music or programs. Another question is that inside these programs we will look at both entries and transitions. Somewhere to add something, somewhere to remove. But we do this throughout the year with each of our athletes, so there is nothing special about it.

- Do we have the opportunity to contact She-Lynn Bourne or Brian Orser's team for some advice on these programs, how best to disclose them? - I think that we definitely don't need any advice on how to open the waltz. We can handle it ourselves - and we have done it more than once. As for the free one, the topic is also well-known. There are all sorts of chips, finds - we will not touch them, but only add our own. So I believe this collaboration will only lead to the best.
- Did Zhenya initiate the transition?
- I can't answer exactly. I said as I was told. *

- Did you take this news with surprise?
- Of course, in terms of how abruptly it happened. From the point of view that for Zhenya now this is probably the best thing she could do ... I hope we will prove it with the results.

- How has Medvedev changed during the time with another coach?
- To be honest, I can't say yet that she has somehow changed a lot. Yes, she became older, but in the training process she was as demanding of herself. Another question is that the form isn't enough for a good performance yet, and it's necessary to choose it."

You said that in about three weeks Medvedeva will have the first stage of the Russian Cup. Has it been decided which of the tournaments will be the second?
- Honestly, I can't say about the second one. Probably, they will not change, Moscow was announced. It's just that she was declared here, but her back aches, after the rental she was given injections. In such a state, it was simply impossible for her to come here. I think that they went to meet her in connection with the transitions.

- Can you tell us more about the injections?
- I haven't penetrated that much, I can't say. As you noticed, I had many other things to do."

Danny G sounds a bit arrogant in this interview. Now I'm afraid for Zhenya's programs and their possible "improvements".

I'm worried too. And I love these programs.

you should see her in a crown

i got the same vibe...it was almost like he was irritated he was being asked these questions? especially the one about ever needing to contact Orser or Shae-Lynn...if it's needed, they absolutely should reach out to them regarding the programs. they aren't Danny's work. that's awfully arrogant.
S

Well. Can't complain about miming in a circus program.
You must log in or register to reply here.

About women's equality or justice triumphs (I hope).