Olga Mikutina | Golden Skate
Menu
Log in
Register
Navigation
Install the app
More options
Contact us
Close Menu
You are using an out of date browser. It may not display this or other websites correctly.
You should upgrade or use an alternative browser.

Olga Romanovna Mikutina (Ukrainian: Ольга Романівна Мікутіна) is an Austrian figure skater competing in Ladies' Singles. She was born on 6 October 2003 in Kharkiv, Ukraine.
Olga is a two-time Austrian national champion (2020–2021), as well as a two-time Austrian national junior champion (2019–2020).
Olga took up skating in 2007 at the age of four. She began her skating career competing for her native Ukraine, and by age 12, was already a three-time Ukrainian youth national champion. When she was 12, her parents decided that she needed better training conditions than were available in Ukraine, and were advised to seek out coach Elena Romanova in Feldkirch, Austria. She would later remark that "at first I didn’t realize that we were really moving there. I thought we were just training there for some time." She began competing for Austria at the advanced novice level internationally in 2016. She subsequently became an Austrian citizen in January of 2020. 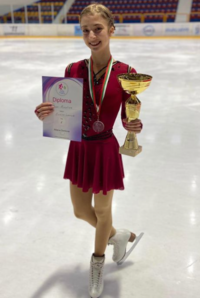 After Golden Skate published this excellent article about Olga today, I finally decided that it is time for her to get her own fan fest.
I will update the OP with all the necessary info in the coming weeks. In the meantime, feel free to gush over Olga's skating here!
Last edited by a moderator: Aug 25, 2021

I'm so happy Olga has a fan page. I watched her in competition this season and I knew she could make the top 10 at Worlds. I'm glad she is keeping her FP for the Olympic season. I can't wait to see her skate again.

Behind the times, but photos of her from her fantastic Worlds debut.

Her SP in her sunny dress.

Vemvane said:
Behind the times, but photos of her from her fantastic Worlds debut.

Her SP in her sunny dress.

I love her yellow dress

Lol, I love the first photo!

Olga will skate at GP NHK and Rostelecom this season! I'm so excited!!!

CrazyKittenLady said:
Olga will skate at GP NHK and Rostelecom this season! I'm so excited!!!

That‘s a big step for her and absolutely deserved! So happy for her!!!

Olga modelling some of her Skate Krasota wardrobe.

Lovely Olga is wishing everyone a happy Olympics season!