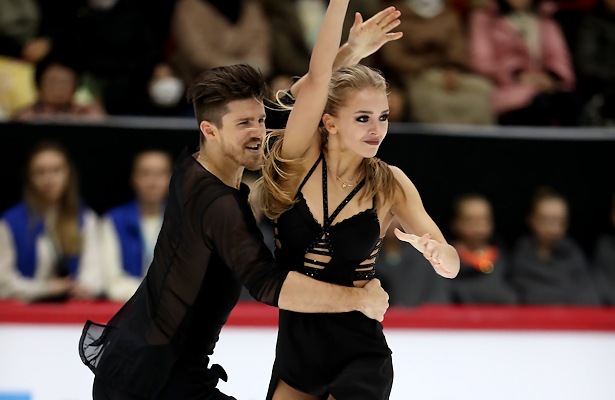 Alexandra Stepanova and Ivan Bukin of Russia qualified for their first Grand Prix Final after taking gold at 2018 Rostelecom Cup.

Stepanova and Bukin put out a sultry routine to “Am I The One by Beth Hart,” which featured level 4 lifts and strong level 3 diagonal steps. Stepanova received a level 3 on the twizzles, but all elements were strong and the team earned high grades of execution (GOE) throughout. They scored a season’s best of 124.94 for first-place finish in the Free Dance and overall (199.43).

“We are very happy to come back after yesterday,” said Stepanova. “We haven’t made a mistake in a long time and it was a good lesson for us. We make the Grand Prix Final for the first time at the senior level and two first places in the Grand Prix series are a great success for us at this time.”

Hurtado and Khaliavin delivered an expressive routine to music by Pink Floyd, Max Richter, and Harry Styles, finishing second in the Free Dance with a new season’s best of 108.02 points. Their performance featured level 4 twizzles, as well as intricate lifts and a strong level 4 dance spin. The Lombardia Trophy bronze medalists moved up one spot overall with 174.42 points.

“Today we skated much better than yesterday,” said Khaliavin. “We’ve worked on our mistakes and we improved. There were still some minor mistakes, but overall we did well.”

“A medal on the Grand Prix has been a goal and I dreamed of it when I saw Javier (Fernandez) getting on the podium,” added Hurtado. “It proves to skaters in Spain that you can be here when you work hard.”

Carreira and Ponomarenko skated a flowing routine to “Bloodstream” and “Angel” by Tokio Myers which included strong twizzles and three level 4 lifts. The team scored 105.20 points to finish third in the Free Dance and overall (174.21) in their debut in the Grand Prix.

“We are pretty happy with how it went today,” Carreira said. “We didn’t get all our levels, but for our first senior year, we’re happy to come third in our second Grand Prix.”