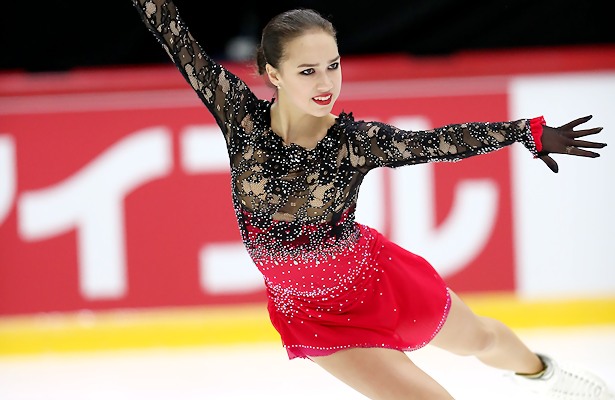 Alina Zagitova of Russia pocked her fifth consecutive Grand Prix gold medal at 2018 GP Helsinki, and has yet to be defeated in any Grand Prix event. Teammate Stanislava Konstantinova rose from fourth to capture the silver, while Kaori Sakamoto of Japan catapulted from seventh to third to win the bronze.

Zagitova underrotated a  triple Lutz-triple loop combination, however, five other triple jumps were clean. The Olympic champion also displayed strong level 4 spins and footwork in her “Carmen” routine to score 146.39 points in the Free Skate and overall (215.29).

“I’m not happy with the short at this competition,” said Zagitova. “The free skate was better, but was still not ideal. It was tough to leave the short program behind; I was analyzing [it] for a long time, almost the whole night. When I got up, I told myself I have to skate well.”

“To just enjoy skating and to show good skating in each of my events,” said the 16-year-old when asked about her goals for the season.

The skater also explained that the tape on her leg is related to a “growing pain” but she is training to overcome it.

Konstantinova put out a solid and clean routine to music from the Anna Karenina soundtrack, landing all seven triple jumps and earning a level four on all spins and footwork. The 2018 World Junior bronze medalist, who had the fourth highest Program Component Score of the evening, finished third in the Free Skate and moved up to from fourth to second overall (197.57).

“I am very happy to have won the silver medal in my first ever Grand Prix. I was absolutely unhappy with my short program where I made a costly mistake, but I am glad I was able to pull myself together and skate well today,” said the the Russian bronze medalist.

“I hope in my next event (Internationaux de France) I will do my very best,” added the skater from St. Petersburg, who is making her Grand Prix debut.

The 18-year-old’s goal for this season is to get better and be stronger, and not to be in the background, but be among the leaders.

Sakamoto, who stood in seventh after the Short Program, gave a redeeming performance to finish second in the Free Skate (140.16). Her routine to music from The Piano soundtrack was solid except for an edge call on a solo triple Lutz. The 2018 Skate America silver medalist otherwise landed six flawless triple jumps and all spins and footwork were graded a level 4.

“In the Free Program I gave it all,” said Sakamoto. “I gave it everything I had that was the only chance I would have to make it to the podium today. I forgot about yesterday’s program, and I just gave my best today.”

The goal for this season for the 2018 Four Continents champion is to qualify for the Grand Prix Final and continue to improve.

Loena Hendrickx of Belgium underrotated two jumps, but was otherwise clean in her routine which featured level 4 spins and footwork with high grades of execution (GOE). She finished fourth (128.05) in the Free Skate, slipping to fifth overall (191.22).

Japan’s Yuna Shiraiwa underrotated three jumps and received an edge call on a triple flip in her routine to finish fifth (127.69) in the Free Skate, but held onto fourth overall with 191.46 points.