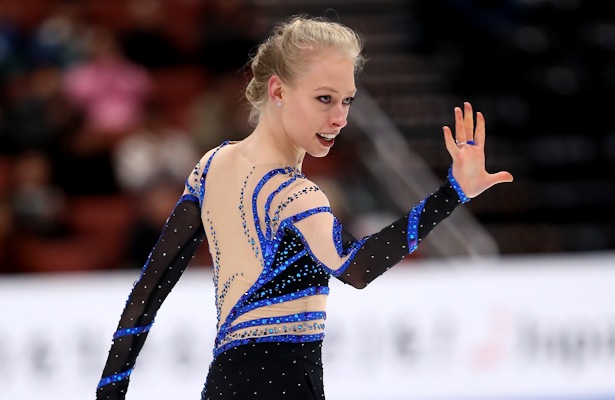 USA’s Bradie Tennell holds a slight lead after the Ladies Short Program at the  2019 Four Continents Figure Skating Championships. Kaori Sakamoto of Japan is in a close second by just over half a point, while USA’s Mariah Bell is in third.

Tennell was strong and fluid in her performance to “Rebirth,” landing a triple Lutz-triple toe, double Axel and triple flip. The 2019 U.S. silver medalist earned a level 4 and high grades of execution (GOE) on all elements to earn a season’s best of 73.91.

“I feel like I performed very well,” said the 21-year-old. “I’m extremely happy with how I did. It’s exactly how I train at home and what I wanted to do here, to go out there and trust myself and trust my training.”

The skater’s goals for the competition are to achieve personal bests.

“I’d like to go out tomorrow and skate like I did today, going for everything and really enjoying myself,” said Tennell. “I really want to sell my program and skate the best I possibly can, with a clean program and achieve all my levels.”

Sakamoto also earned a new season’s best (73.36) in her smooth performance to “From My First Moment,” which featured a triple flip-triple toe,  a huge double Axel, and triple loop.  The 18-year-old also received high GOEs and level 4 on all elements, earning the highest program component scores of the segment (33.38).

“I went too sideways on the last spin, but other than that, I can say that my jumps were very good,” said the defending champion. “I am very satisfied with my performance. I can see my improvement for my steps other than elements. The score showed my improvement, too. I am glad I work very hard. When I came here, I tried not think about me as the Japanese Champion. I practice hard and I want to show my performance like I did at the last Four Continents championships.”

“I’m really excited! It felt good!” said the 22-year-old. “I think it’s the first time I’ve put out a really solid short program and I have so much more room to grow.”

Bell’s goal for the free skate is to “stay in the moment” and put out the “best skate possible.”

South Korea’s Eunsoo Lim gave a light and airy performance to music from Somewhere In Time, landing a triple Lutz-triple toe, triple flip and double Axel.  The 15-year-old exceeded the time limit by one second, which resulted in a one-point deduction, but otherwise received a level 4 for footwork and most of her spins. She sits in fourth with 69.14 points.

“I tried my best to make a consistent performance, but I’m not really satisfied with my triple toe combination, but I did pretty well,” said the 2018 Rostelecom Cup bronze medalist. “I will focus on having a clean program. I want to achieve a clean program to make this season’s best. I want to focus on elements, because I practiced very hard. I want my make my program very active, and fun for my audiences.”

Rika Kihira popped her intended triple Axel, but rallied back to land a strong triple flip-triple toe and triple Lutz in her routine to “Clair de Lune.” The 2018-19 Grand Prix Final champion is in fifth place with 68.85 points.

“I hesitated doing the triple Axel, but I ended up including it into the program,” said the 2019 Japanese silver medalist. “Although it (the performance) was not great, there is tomorrow, so I would like to do my best.”

Elizabet Tursynbaeva of Kazakhstan turned out the landing of a double Axel, but landed a triple Lutz and triple Salchow-triple toe. The 2018 Finlandia and Ondrej Nepela silver medalist also earned a level 4 on all elements and was awarded 68.09 points for sixth place.

“I was a bit nervous and I could have definitely done better,” said the 18-year-old. “Practices were fine and I skated already three clean shorts in practice here. I want to show my best (free skate) and my main goal is to skate clean.”

The skater brought back the quad Salchow only for a week as it is not yet consistent.

“It is different from doing it in practice by itself than doing it in the program and especially in competition,” explained Tursynbaeva. “It’s still very fresh. If I don’t try it here, I want to do it in my next competition, the Universiade. This event is in Russia, which is closer for me and it will be easier. I’ve landed it in practice here, though. We’ll see.”

USA’s Ting Cui put her heart and soul into her routine to “Rhapsody on a Theme of Paganini,” landing a triple Lutz-triple toe, triple flip, and double Axel. The 16-year-old from Baltimore, Md., was dinged a point in GOEs for an edge call on her flip, but did well in her debut at this event, scoring 66.73 for seventh place.

“I was a little bit shaky on some things, but I’m just happy I was able to go out there and get my jumps done,” said the 2018 Tallinn Trophy silver medalist. “It was so much fun skating for the crowd, especially during my footwork, that was great. It’s my first Championship event and I really want to enjoy every moment of it.”

“I made a mistake on the triple-triple that I wouldn’t even make during my practices,” noted the 2018 Internationaux de France silver medalist. “Usually I would feel sad about it, but I want to think of this as one event and move on.”

“Today was not my best, but I skated clean, so I am happy with my short program,” said Kim. “This competition (first ISU championships) is more fun than the other competitions, so it was pretty good. For the free program, I want to skate a clean program with a good performance and a smile.”

“I feel pretty good about the performance,” said Craine. “Practices were going really well, especially with my (triple) loop-(triple) loop combo at the moment. There’s always room for improvement. I got an under(rotation call) on my second loop, but overall I’m pretty happy with how I did today.”

“My warm up was uncharacteristically bad for me,” admitted the 22-year-old from Prescott, ON. “I came off the ice and tried to adjust, but even when I went back out, I felt really uncomfortable on the ice. I just felt like I was slipping and didn’t have confidence in my edges.”