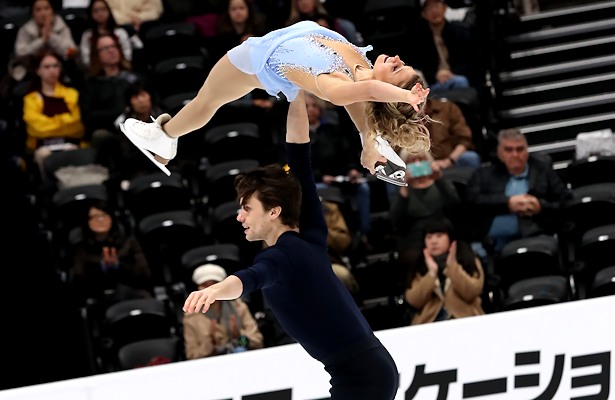 Canada’s Kirsten Moore-Towers and Michael Marinaro took the lead in the Pairs Short Program at the 2019 Four Continents Figure Skating Championships on Friday afternoon. China’s Wenjing Sui and Cong Han and Cheng Peng and Yang Jin are currently in second and third, respectively.

Moore-Towers and Michael Marinaro showed marked improvement in their connection to “The First Time Ever I Saw Your Face.” The 2019 Canadian national champions delivered a level 3 triple twist, solid side-by-side triple toes and throw triple loop. The team also earned level 4 on the spin and footwork for a new season’s best of 74.66, topping their score from 2018 Skate Canada where they won bronze.

“We think we did good, did everything to the best of our ability,” said Moore-Towers. “We were hoping to put out a clean performance with good levels and that looks like what we did. We like to skate how we have been training. If we perform the way we practice each day we will be pleased with ourselves.”

“We came here preparing what we did today and we did just that,” said Marinaro. “We are on our way to tomorrow and ready to reset.”

In their first appearance this season, Sui and Han performed to “No One Like You,” executing a solid level 4 triple twist and throw triple flip, however, she fell on side-by-side triple toes. The 2018 Olympic silver medalists earned a level 4 on their spin and footwork to score 74.19 points.

The four-time Four Continents champions had withdrawn from both their Grand Prix events, as well as nationals, due to an ongoing injury on Sui’s right foot which forced the team to withdraw from Worlds last year.

“The fall hurt a lot,” admitted Sui. “This is our first competition, so I think we were a little too excited. I think we didn’t adjust our conditions too well, because in our practice, we were normally able to skate clean in the short program. The mistake today was pretty unexpected and I hope that we can adjust better toward tomorrow’s competition. We just want to skate the best we can and see where it takes us.”

“We didn’t feel much difference because our goal is always to skate the best we could,” said Han. “It’s been a long journey for us to be here today, so we look more at the overall performance in the free skate rather than a single element’s GOE. We want to skate to our best and continue to work hard.”

Teammates Peng and Jin had a fall on the throw triple loop, but otherwise showed a level 3 triple twist, solid side-by-side triple toes and level 4 footwork and lift in their routine to “Ophelia.” The 2018-19 Grand Prix Final silver medalists earned 69.48 points.

“In today’s practice, our coach said that our performance was a little bit too tight and not relaxed enough,” Peng revealed. “I think our performance just then was relaxed and not affected by the mistake. Our goal is to skate better than what we did before. We want to do a relaxed performance tomorrow, because I saw that there are a lot of Chinese audience and it is now the Chinese New Year, so we want to leave them with a memorable performance and New Year.”

“We really want to be on the podium, but we also want to put out two strong performances backing up our nationals performance to show we are here to play,” said Cain of their goals. “We hold ourselves to a really high standard, so we’re going to try and do a clean performance tomorrow. We know coming in to this that we’re trained and we can do all of these elements pretty easily.

“We did a fist pump after the program because we were really pleased with the effort we put out today,” explained LeDuc.

Cain had suffered a concussion from a lift at Golden Spin of Zagreb in December.

“Right after the injury, we made a plan of how I would get back to Nationals feeling confident in myself and the elements,” said Cain. “It was a plan also made to be flexible and depending on how I felt that day, we would change the training. We did a lot of section work with the programs, so the elements were trained even if we weren’t able to do a lot of full programs. I was able to openly talk about my emotions and my frustrations so I wasn’t keeping anything inside.”

“The best teams come together in times of adversity and grow stronger together and we definitely did that,” added LeDuc. “What got me through was Ashley’s strength and she was remarkable through the process and our coaches as well. It helped me push through the intense fear when I started doing that lift again and they helped me to work through it and talk about it.”

Teammates Tarah Kayne and Danny O’Shea put out a soft but strong routine to “Turning Page,” which featured a good throw triple loop, level 4 spin and footwork, however, she turned out the landing on the side-by-side triple Salchows. Despite the mistake, the defending champions scored a season’s best of 66.34, improving from 2018 Internationaux de France where they won silver.

“I’m very happy with our performance today, especially with our levels on some elements like our footwork that we’ve been working very hard on and our death spiral,” Kayne commented. “I’m a little bit disappointed that I made a small mistake on my jump.”

“Tarah is being a bit hard on herself,” O’Shea chimed in. “We performed our best today and gave it everything we could. I’m very proud of us.”

Evelyn Walsh and Trennt Michaud of Canada showed some heat in their routine to “Come Together.” The 2019 Canadian national silver medalists landed solid triple toes, a throw triple loop and level 4 lift for a new season’s best of 61.91, besting their score from 2018 Skate Canada and breaking the 60-point mark. The are currently in sixth place.

USA’s Haven Denney and Brandon Frazier sit in seventh (61.71) after Denney underrotated and two-footed the landing on the side-by-side triple Salchows. However, the 2018 Autumn Classic bronze medalists showed a level 3 twist, throw triple loop and level 4 lift in their “Billy Jean” routine.

“It wasn’t the best program we know we’re capable of doing,” admitted Denney. “My (triple) Salchow, for instance, I didn’t let it go all the way up before I rotated, so I know I can do that better. Overall, I thought we did a good job with staying in the moment of the program, and once one thing passed, we moved on to the next. We just tried to maximize the points the best we can do throughout the program.”

“We were maybe a little tight on one element, the (back outside) death spiral, but I think we had a little bit more energy and performance than what we had at our U.S. Championships program,” added Frazier. “We had some loss of points that we will try and make up in the long.”

Canada’s Camille Ruest and Drew Wolfe had a low catch on their triple twist and she fell on the side-by-side triple toes she fell, but the 2019 Canadian national bronze medalists landed a throw triple loop and earned a level 4 on their lift, footwork and spin in their “Wild Horses.” They round out the eight-team field with 57.38 points.