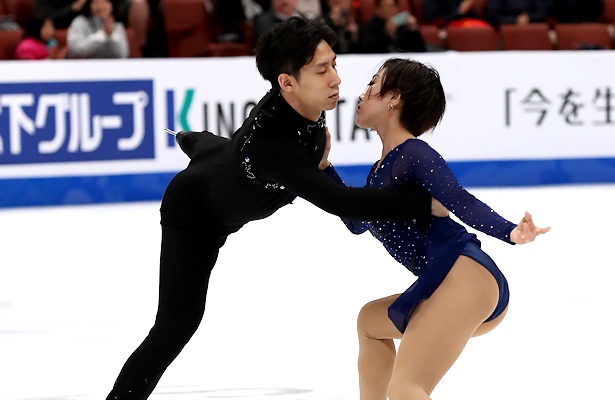 China’s Wenjing Sui and Cong Han overtook Canada’s Kirsten Moore-Towers and Michael Marinaro to capture the gold medal in the Pairs event at the 2019 Four Continents Figure Skating Championships on Saturday afternoon. The win makes it their fifth title after six appearances at this event. Teammates Cheng Peng and Yang Jin maintained third for the bronze.

Sui and Han gave a fluid and mesmerizing routine to “Rain, In Your Black Eyes,” but it wasn’t flawless. The 2018 Olympic silver medalists produced a huge level 4 triple twist, which racked up 4+ grades of execution (GOE) across the board, and followed up with side-by-side triple toe-double toes and a throw triple Salchow. Sui underrotated and fell on the side-by-side triple Salchows, but the team went on to produce a throw triple flip and earned level 4 on two of their lifts. They scored 136.92 for first in the free skate and edged out the Canadians by .06 points from the top spot with a total score of 211.11.

“We were only showing what we have completed during our training, but actually we are not familiar with our program yet,” said Han. “Like the number of time we skated with music is really insufficient. We were a little stressed on ice today. It was a bit tough because we weren’t familiar enough.”

Sui agreed, add: “We did four or five, maybe even less (full run throughs), two or three times? The third time (complete run through) was actually this very time. I feel like overall we were less prepared and needed more systematic training.”

“Yesterday, I felt I was too excited in general, so today I tried to calm myself down a little,” Sui said of preparing for the free skate. “Maybe I over did it a little. I think we will have a better control over the competition after this time.”

Overnight leaders Moore-Towers and Marinaro were near-flawless in their performance to music from Pink Floyd. The team lost precious points when they lost GOEs on their reverse lasso lift (level 3) halfway through the routine. The triple twist was a level 3, but the side-by-side triple Salchow-double toe-double toes and triple toes were spot on. They also produced a throw triple loop and triple Salchow, scoring a new season’s best of 136.39 for a second place finish in the free skate and overall (211.05).

“I think having the result being so close to winning is a little bit bittersweet for us,” said Moore-Towers, adding that Sui and Han were her favorite pair team. “We’re proud of ourselves, but we know we left some good points on the table that maybe would have made for a result that we were more happy with. If you would have told us last year we would have been disappointed at second, we would have called you crazy. We know what we need to do and we’ll work for it for Worlds.

“We’re disappointed in the lifts today,” acknowledged Marinaro. “We’ve been focusing on that all season and we’ve been progressing pretty well on them and for that to go that way today was a pretty big disappointment, because it’s been so tight. But we did a lot to be proud of today and we have our biggest score by a lot.”

Peng and Jin were strong in their routine to “La Vie en Rose” by Patricia Kaas. The only error came when she doubled and stepped out of the side-by-side Salchows. The team rallied back  to land synchronized side-by-side triple toe-double toes, a triple twist, throw triple loop and triple Salchow while earning many positive GOES throughout on all elements. The 2018-19 Grand Prix Final silver medalists finished third in the free skate (135.94) and overall (205.42).

“We’re not very satisfied with the performance today,” said Peng. “We need to keep improving the quality. Despite the success rate of the triple jump (Salchow) in the training, we want to try that and challenge ourselves, and show what we have done in our training. ”

“She did better than me today,” said Jin. “My landing of the triple jump was not very steady, but overall, the program was good. This competition is a good learning experience and wake up call. We have done the throw jump of good quality many times before and never had such mistake in the short program. This lets us know that in the future, when competing in a smaller rink, we need to more attention to the elements.”

USA’s Ashley Cain and Timothy LeDuc delivered a melodious routine to music from the W.E. soundtrack which featured a triple twist, throw triple flip and triple Salchow. However, she underrotated a triple loop on the opening side-by-side jumps and then doubled her first jump on the side-by-side triple Salchow-double toe-double loops. The 2019 U.S. national champions finished fourth in the free skate with a new season’s best of 129.33, besting their score from 2018 Skate America where they won bronze, and maintained fourth overall (196.82).

“I wasn’t feeling great this morning,” revealed Cain. “The practice was really rough for me and I was really dehydrated. So I went back to the hotel to rest and hydrate, and when I woke up, I felt like a whole new person. That’s how I wanted to come into the area, forget about what happened this morning and be as strong as I can be.”

Teammates Haven Denney and Brandon Frazier, who stood in seventh after the short, finished fifth in the free skate with a new season’s best of 122.47. The 2019 U.S. silver medalists showed solid throw triple jumps, however, they struggled on the side-by-side jumps. Despite the mistakes, they earned level 4s on all elements except for the twist (level 3) and earned a season’s best of 122.47 for fifth in the free skate and overall (184.18).

“We’re proud of our performance because we had a tough start to the season and we came out here showing promise and improvement,” declared Frazier. “We’re going to talk about the missed technical elements and work on them.”

“During the off season, some of our main focus will be on the technical elements, like our jumps and creating new lifts,” said Denney. “We can of course also always improve on our skating skills, transitions and the intricacy of our programs.”

“With the season we’ve had, the injury, and battling some ups and downs, we’ve both been trying to stay in it so next season we can come back with everything,” added Frazier. “This is our last competition of the season and we’re not going to take much time off and get to work so we are ready for the start of next season.”

“I’m very disappointed in my performance today,” said Kayne. “We’ve been practicing and training really well and we even had a really strong six-minutes warm-up, but I think we just got a little off and unfortunately we weren’t able to overcome today.”