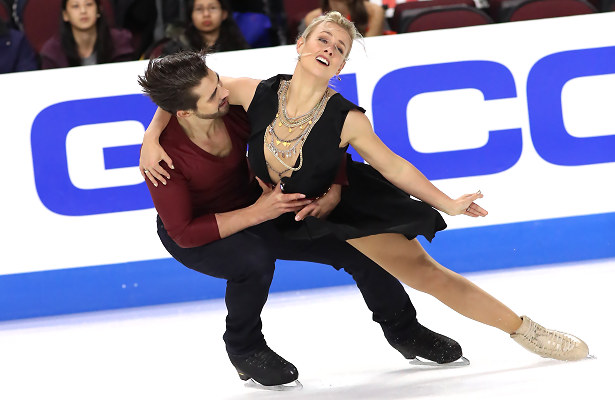 Hubbell/Donohue and Stepanova/Bukin both put out tremendous performances, with the Russians finishing first in the free dance by .08 points. The main difference was reflected in the grades of execution (GOE). Both teams were given the same base value score of 45.84 for their elements, however, the Russians scored .42 points more in the GOE department.

“Today we’re more pleased with our performance than yesterday,” said Stepanova. “We fought through and kept pushing until the end and overall it was not a bad performance.”

In their routine romantic routine to “Shallow” and “Alibi” from A Star is Born, Hubbell and Donohue earned a level 4 on the combination spin, twizzles, and straightline-rotational lift, and curve lift, while the serpentine and one-foot steps were graded level 3. The 2018-19 Grand Prix champions scored 124.58 in the free dance and 209.55 overall for their second Skate America gold.

“We were really looking forward to debuting this program,” said Hubbell. “You work on a project for so many months and you can’t see straight anymore. We were happy to put it out for the first time and looking forward to getting a lot of feedback. There were good things and not so good things, and we feel like we can make a lot of progress for next week. There was a nice crowd reaction and there was a good connection between the two of us and that’s a great place to start.”

Donohue commented that he hoped to have “two working lungs” by the time they compete at Skate Canada.

“You always hope to be in the best health, but that doesn’t always happen,” said Hubbell . “A cold unfortunately turned into bronchitis for Zach and luckily we have a great medical team here to help him get through. But it’s been a hard week or so and certainly that adds an element of stress going into a free dance. We felt like there was a lot of energy missing and we fought through until the end. It wasn’t the same kind of performance that we know we can give of that program. We do really enjoy the kind of southern rock ‘n roll vibe of that program. We really love the serpentine step and feel that we have created elements that really embody the style that we want.”

Fournier Beaudry and Sorensen showed confidence in their smooth routine to “Summertime” and “Cry Me a River,” which included level 4 lifts and twizzles. The diagonal steps were graded a level 3 while the one-foot steps were a 2. They scored 118.36 points, just shy of their season’s best from 2019 Nebelhorn Trophy where they took gold. Their total score was 197.53, and the 2019 Canadian bronze medalists easily maintained the third spot on the podium.

“I think it (a Grand Prix medal) is something that we’ve dreamed about since we started skating together,” Sorensen said.

“Stepping onto that podium is everybody’s dream, so to finally be able to do it in our first Grand Prix skating for Canada after not being on the circuit last year is just very exciting,” added Fournier Beaudry. “We’ve set high goals for ourselves this season and we felt like we were able to give our best.”

Olivia Smart and Adrian Diaz of Spain showed a playful routine set to music from Micmacs a tire-largot which was highlighted by their level 4 stationary lift, twizzles, and curve-rotational lift. The national silver medalist earned all new personal bests at this event, finishing fourth with 114.39 points and 191.01 points overall.

Russia’s Tiffani Zagorski and Jonathan Guerreiro played to the audience with their dance to “Survivor” from Tomb Raider, showing difficult level 4 lifts, however, she received a level 2 on the one-foot steps, while he a level 3 on the twizzles. The 2018 Olympians finished fifth in the free dance (110.64) and overall (181.82).

USA’s Christina Carreira and Anthony Ponomarenko only earned a level 2 for their step sequences, but produced level 4 twizzles and lifts in their Flamenco routine to “Farrucas” and “Malaguena”. The 2019 U.S. International Classic silver medalists placed sixth in the free dance (110.14) and overall (180.55).

“It was much better than yesterday for sure,” said Carreira. “There’s still a lot that we want to improve and make better, but from yesterday it’s a big improvement and that’s how we want to skate.”

“It was very redeeming,” agreed Ponomarenko. “We promised everybody that we would skate better today and we did that so I’m very happy about that. There is still a lot we need to work on, but I’m happy with where we are at this point in the season and we are looking to carry this momentum to the rest of the Grand Prix season and into U.S. Championships.”

In their first outing together as a new team, USA’s Caroline Green and Michael Parsons showed lots of speed in their performance to music by Woodkid. The twizzles, lifts, and spin were all graded a level 4, while the diagonal and one-foot steps were a level 2. They finished seventh (105.06) and moved up one spot to seventh overall 173.03.

“I think you need to approach each competition like its own entity,” said Parsons regarding their approach to this event. “You can’t think of any other competitions, so we came here just thinking about putting two clean skates out, showing we can compete here and we have definitely showed that so far. Now that we have finished the free dance now we are looking towards building from this to next week at Skate Canada (International), because there is definitely a lot we can improve on.”

“I think it has definitely been mainly adapting to longer programs and more demanding elements,” said Green of transitioning to the senior ranks. “I think that it is a challenge that I am ready for. I’m happy to see that. I think this competition sort of solidified in myself that I’m capable of competing at the senior level. It was definitely a little confidence boost there.”

“I’m very pleasantly surprised at how well she has adapted to senior,” Parsons chimed in. “She has done really well and I couldn’t be happier.”