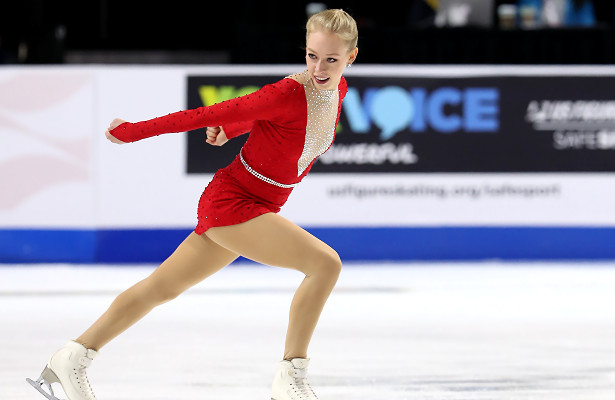 Tennell was flawless in her modern routine to “Mechanisms” and “Chronos” by Kirill Richter which she debuted at this event. The 2019 U.S. silver medalist reeled off effortless jumps which included a triple Lutz-triple toe, double Axel, and triple flip. All spins and footwork were graded a level 4 and the skater also racked up many high positive grades of execution (GOE) for a new personal best score of 75.10.

“I was really happy with my skate, especially after my injury and working my way back to full training,” said Tennell. “I went out there with the mindset of doing what I do everyday in practice and not trying to make anything any better or certainly any worse. I wanted to enjoy myself, be relaxed and perform. The ice is my safe space. It’s where I feel most at home… It’s almost like an onion. You have to peel back the layers, and that’s almost what I’m doing with my skating now. To show this program is a challenge for me, but one that I welcome. I was very excited to put this program out there because I’m proud of it.”

Sakamoto was also clean in her smooth, yet challenging routine to “No Roots” by Alice Merton which received 73.25 points. The 2019 Nebelhorn Trophy silver medalist produced a triple flip-triple toe, double Axel, and triple loop—all solid. Two of her spins were graded a level 4 as was her step sequence which earned one +5 GOE by a judge.

“I came into this event feeling not so confident,” said the 19-year-old from Kobe. “I am happy that I was able to skate without mistakes, but I need to practice more to have more confidence.”

Teammate Higuchi surprised herself with a nearly flawless skate set to “Bird Set Free” by Sia. The 2018 World silver medalist landed a double Axel, triple Lutz-triple toe, and triple flip. Her change combination spin and steps were also graded a level 4 and the skater from Tokyo earned a new personal best of 71.76.

“I was really happy to skate a clean program after a long time,” said the skater from Tokyo. “I think it has been two years since I skated a program at this level. However, I left some points on the table in the spins, steps and also jumps. I hope to practice more and be confident for the Free Skate.”

Russia’s Anna Shcherbakova, one of the favorites coming in, showed a refined routine to music from The Perfume soundtrack, but underroated the back end of a triple Lutz-triple loop and had an unfortunate fall in the step sequence. The 2019 World Junior silver medalist otherwise landed a clean double Axel and triple flip and earned a level 4 on all elements for a fourth-place finish with 67.60 points.

Teammate Elizaveta Tuktamysheva sits in a close fifth (67.28). The 2019 Lombardia Trophy and Finlandia Trophy silver medalist landed a triple Axel, but stepped out of the back end of a triple toe-triple toe and underroated a triple Lutz. Two spins were graded a level 4.

USA’s Karen Chen landed a triple Lutz-double toe (meant to be a triple), a double Axel, and triple loop. Her layback spin was the highlight which earned a level 4 with mostly +4 and +5 GOEs across the board for a total score of 66.03—a new personal best.

“I was really nervous about that first jump,” admitted the 20-year-old. “Obviously it didn’t go the way I planned for it to go, but once it was over, I was like, ‘You know what? I have the rest of the program to really sell it.'”

“I love this program,” said Chen of “You Say” by Lauren Diagle. “Once the music starts playing, I have a solid five seconds to just stand there and breathe and start getting into the zone. This year, it was a struggle to decide on music and know which direction I wanted to go.”

“It was a little scary, not going to lie,” said the Cornell Univeristy student of her return to competition. “Getting out there for the warmup, I could definitely feel my legs just a little shaky, which was definitely something that was new to me. But regardless, I knew that this is what I wanted to do, and I love competing and I just need to feel comfortable again back out there. There were definitely nerves. This year is my comeback year, and so I wanted to make it count, but at the same time, I know that I’m throwing a lot of things out there, like I’m skating and I’m also going to school. It’s been tough balancing, but I do really enjoy it and I think it’s the right decision.”

Fellow teammate Amber Glenn underrotated the back end of a triple flip-triple toe, but was otherwise clean, landing a double Axel and triple loop and earning a level 4 on two spins and footwork. The 2019 U.S. International Classic bronze medalist sits in seventh place with 64.71 points.

“This is my first Skate America and basically my first Grand Prix,” said Glenn. “I had one a while ago, but it was so long ago I can barely remember (2017 Cup of China). I didn’t want to let myself get intimidated. I wanted to go out there, perform and do my job. So I just tried to focus on that and it worked out well.”

“After that 2014 (junior) title, I stopped skating completely and didn’t know if I was going to come back,” she said of her return. “Now that I did, I switched coaches, switched rinks, different environment, a whole new mindset toward skating. I do it for me now and my love for it and not just for other people and the trophies or anything.”

South Korea’s Eunsoo Lim wasn’t able to get in her triple toe on the back end of her opening triple Lutz which received an edge call, and later tried to add it to a triple flip, but it was only a double. The 2019 Autumn Classic and Shanghai Trophy bronze medalist is currently in eighth with 63.96 points.