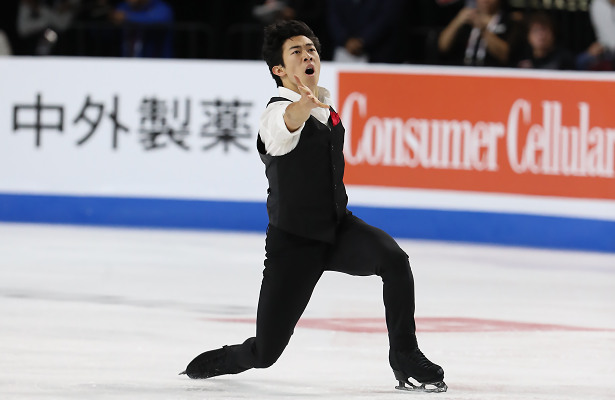 Chen reeled off a quad Lutz and triple Axel in the first half of his program and a quad toe-triple toe in the second half  in his romantic routine to La Boheme performed by Charles Aznavour. The two-time and current World champion earned a level 4 on his Camel change spin, step sequence, and change combination spin, and was awarded a score of 102.71.

“This is my first time performing the Short Program in a competitive setting,” said the 20-year-old. “I’m not entirely happy with how the program went, however, since this is the first outing, I’m pretty okay with how things went. I’m looking forward to competing tomorrow and hopefully cleaning up some of the mistakes I made today and keep moving forward.”

Aliev impressed with a quad Lutz-triple toe right out the gate in his routine to “Je Dors Sur Des Roses” (from “Mozart L’Opera Rock”) by Mikelangelo Loconte. The 2019 Nepela Memorial champion followed up with a quad toe and then a triple Axel in the second half of his program. The skater from Moscow also earned a level 4 for his flying camel and change sit spin, as well as his footwork, to earn a score of 96.57.

Messing had great skate which featured a quad toe-triple toe, triple Axel and triple Lutz. The 2019 Autumn Classic International champion also earned a level 4 on two of his spins and racked up tons of positive grades of execution (GOE) on all elements. He sits in third with a new personal best of 96.34.

USA’s Jason Brown showed great artistry in his routine to “I Can’t Go On Without You” by Kaleo which featured a triple flip that earned +4 and +5 GOEs across the board from the judging panel. The 2019 U.S. bronze medalist popped a triple Axel, but was otherwise clean, delivering a triple Lutz-triple toe, and earning level 4 on all spins and footwork to score 83.45 points for fourth place.

“It was a lapse of focus in the moment,” said the 2014 Olympian of the triple Axel. “I should not have missed it; I have not missed one all week. I’m very irritated with myself. In the moment, you have to try not to relive it. Whether I was trying to stay relaxed about it or whether I was trying to attack it, I can’t remember. But I remember a moment of something right before [it happened]. I just said, ‘Don’t show emotion, just keep going.’ I think my experience definitely serves me well when it comes to making mistakes and having to pick back up like nothing happened, but that irritation doesn’t go away.”

“I love both of my programs,” Brown added. “To have this ‘unveiling’ here with my first time to compete it was like, ‘Oh how is it going to feel with the adrenaline and in front of a crowd?’ I tried my best to pace it the best that I could. There were little bits of disappointments in there, but I’m really proud of the overall performance.”

Michal Brezina of the Czech Republic stepped out of a quad Salchow and doubled a triple flip (in combination with a triple toe), but was otherwise clean in his bluesy routine to “Baby Did a Bad Bad Thing” by Chris Isaak. The 2018-19 Grand Prix Finalist delivered a triple Axel in the second half of his program and also earned a level 4 on all spins and footwork, scoring 81.11 points for fifth place.

Israel’s Alexei Bychenko sits in sixth with 79.76 points after his performance to “Words” by Harel Skaat. The 2019 Nebelhorn Trophy bronze medalist doubled a triple Lutz in combination with a triple toe, but landed a triple Axel and quad toe.

Junhwan Cha of South Korea doubled a quad Salchow, but landed a triple Axel and triple Lutz-triple loop in his short to music by Astor Piazzolla.  The 2018-19 Grand Prix Finalist bronze medalist showed good spins and footwork, and sits in seventh place (78.98).

Japan’s Kazuki Tomono is in eighth place with 75.01 after stepping out of a quad toe that was meant to be in combination with a triple toe in his program to “Chroma – The Hardest Button to Button”.  Nevertheless, the 21-year-old from Osaka landed a quad Salchow and triple Axel and earned a level 4 on two of his spins and footwork.

Boyang Jin of China doubled a quad Lutz and fell on a triple Axel and sits in ninth place (74.56), followed by USA’s Alexei Krasnozhon who underrotated and fell on a quad flip (72.30).