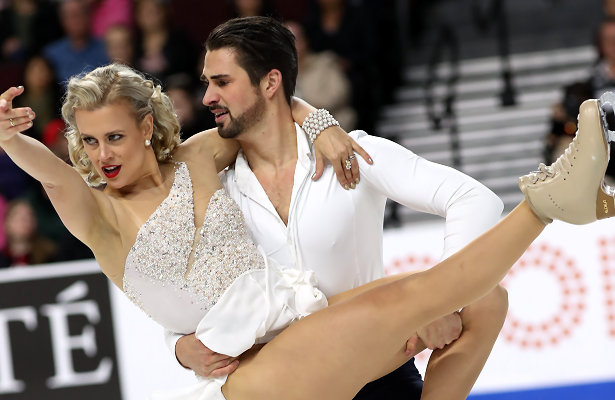 USA’s Madison Hubbell and Zachary Donohue took the lead in the Rhythm Dance at 2019 Skate America followed by Alexandra Stepanova and Ivan Bukin of Russia and Canada’s Laurence Fournier Beaudry and Nikolaj Soerensen in Las Vegas, Nevada, on Friday night.

Note: Due to a calculation error on the element “Pattern Dance Type Step Sequence” (PSt), the Rhythm Dance (RD) scores at the ISU Grand Prix of Figure Skating event Skate America had to be re-calculated for all skaters. The revised results and details are published with the corrected scores. The overall RD standings did not change. The correct scores are reflected below.

Hubbell and Donohue delivered a playful routine to “My Heart Belongs to Daddy” and “Let’s Be Bad” in which Hubbell portrays Marilyn Monroe. The two-time U.S. champions earned a level 4 on their strong twizzles and straightline lift, as well as the Finnstep in which they met all four key points. The midline and pattern steps were both graded a level 3, and they were awarded a new personal best of 84.97.

“For our first time out, we are both excited and have learned a lot about what we can do with our rhythm dance going into Skate Canada [International] next week,” said Donohue. “We are very happy with our first performance, especially since we didn’t have a senior B (Challenger Series) event to prepare us for this competition. It didn’t have as big of an effect that we were worried it might. So its feels good to get back on the ice competing in Vegas, which is amazing, with a well-prepared program that we both really love and feel joy and connect with.”

“Zach and I were so pleased to begin our season here at Skate America,” said Hubbell. “It’s our first time ever jumping right into the Grand Prix season. I feel like we have so much progress to make on the program, but it was a really great performance for today. It was really exciting for me to debut the Marilyn Monroe character. It’s something I have dreamed about skating to for many years, so it was great to actualize that here in Las Vegas.”

Stepanova and Bukin performed a quickstep and blues show routine to music from Moulin Rouge which included strong level 4 twizzles and a curve lift, however, the Finnstep was only graded a level 2. The and midline and showy pattern steps were graded a level 3 and the 2019 European silver medalists earned 81.91 points for second place.

“We’re very happy to be here,” said Stepanova. “This is our first competition and the first time for us to compete our program in front of an audience. We know there is still a lot to improve, but we’re glad to be here at the first Grand Prix.”

Portraying “Bonnie & Clyde,” Fournier Beaudry and Soerensen showed good level 3 diagonal and pattern steps and earned a level 4 for their Finnstep in which met all four key points. The 2019 Nebelhorn Trophy gold medalists also produced entertaining twizzles in which she was graded a level 4 and he a level 3. Their rotational lift had a nice entry and was also graded a level 4 and the team finished third with 79.19 points.

The team had to sit out the Grand Prix series last season as they switched countries from Denmark to Canada.

“We enjoyed our first Grand Prix after being one season out of the Grand Prix,” said Fournier Beaudry. “We had no expectations, we just wanted to have a good experience and I think this is what we did.”

Olivia Smart and Adrian Diaz of Spain put out a fun and entertaining routine to music from Grease that was laced with well-known choreographic moves. The midline, pattern steps and Finnstep were graded a level 2, while the twizzles and rotational lift were level 4. The 2019 Lake Placid International Ice Dance gold medalists received 76.62—a new personal best—for fourth place.

Performing to music from The Greatest Showman, Russia’s Tiffani Zagorski and Jonathan Guerreiro  delivered level 4 twizzles showing good speed. The Finnstep, midline and pattern steps received a level 2 while the rotational lift was level 4. They scored 71.18 points for fifth place.

“It’s been great in practice, but this is probably the worst time we have ever performed it,” admitted Carreira. “Tomorrow we will get out there and skate much better.”

“I think it was just pretty messy,” agreed Ponomarenko. “We left a lot of points on the table. We are kind of disappointed with that. We didn’t get all of our levels and we made some mistakes here and there and in the rhythm dance, there isn’t really room for error. We are looking forward to coming out strong tomorrow and showing what we can actually do.”

Teammates Caroline Green and Michael Parsons, who are in their first season together, are in eighth place with 67.97 points—an improvement since Lombardia Trophy where they finished fifth.

“It definitely was a lot better than our skate at Lombardia (Trophy),” noted Green. “Our goal was to have as clean of a skate as possible, so it is definitely a step in the right direction.”

“I think we have built a lot on our previous performance and have shown the judges and the audience that we’ve improved a lot and we still have a lot more to improve,” said Parsons. “So we are very happy with this and we are happy to keep building.”

“I feel that so far we have adapted really well to the new partnership,” said Green. ” I think that we have a good trust with each other. Maybe it is not quite as natural as it was with our siblings, but I definitely think we are in a good place and this has the potential to be even a little higher.”

“I had a long career with my sister and it does feel strange to be at a competition like this without her, but I think I’m really lucky in the fact that I can use all the experiences I had with her to learn from, to teach Caroline and to build on this new partnership,” added Parsons.

Sofia Shevchenko and Igor Eremenko of Russia is currently ninth (66.79) followed by China’s Hong Chen and Zhuoming Sun who scored a new personal best of 61.74.