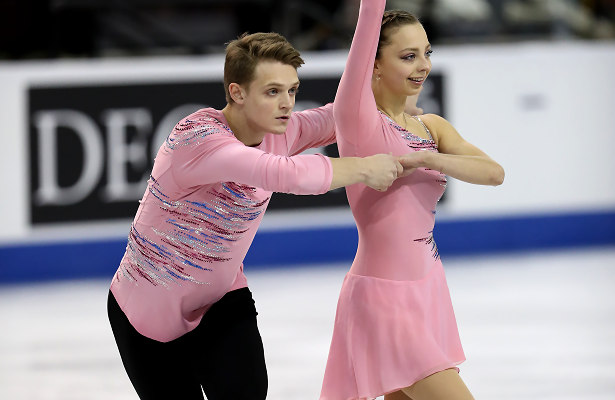 Russia’s Aleksandra Boikova and Dmitrii Kozlovskii took the lead in the Pairs Short Program at 2019 Skate Canada International on Friday night in Kelowna, B.C. Kirsten Moore-Towers and Michael Marinaro of Canada are in a close second followed by Russia’s Evgenia Tarasova and Vladimir Morozov.

Performing to an instrumental version of “My Way,” Boikova and Kozlovskii landed smooth side-by-side triple Salchows followed by a triple twist and a huge throw triple flip. The 2019 European bronze medalists also showed a good group 5 reverse lift and earned a level 4 on their footwork and spins. Only the back-inside death spiral was graded a level 2 and the team scored a new personal best of 76.45 for first place.

“Today doesn’t matter, because tomorrow is the main day and our scores are not important,” Kozlovskii said. “For each athlete, the goal is to give a clean performance and to bring across the idea of the programs. Figure skating is not just sport, but also an art, and all athletes want to develop to combine the technical aspect and the second mark that consists of different components.”

Moore-Towers and Marinaro put out a good short to “Love On the Brain,” which featured a triple twist and throw triple loop and side-by-side triple toes. The lift, change combination spin and steps were graded a level 4, and the 2019 Four Continents silver medalists placed second with a new personal best score of 75.50.

“As for every athlete, our main objective is to compete how we train, and today, for the most part, we’re pretty pleased with the outcome,” said Moore-Towers. “There are a few things that we lost a few points on we’re looking to gain at NHK (Trophy), but overall we’re happy and looking forward to tomorrow.”

Tarasova and Morozov had a good start in their “Bolero” routine, producing the only level 4 triple twist in the group, but then he doubled the side-by-side triple toes. Nevertheless, the 2019 European and World silver medalists landed a solid throw triple loop and received a level 4 for both the change combination spin and group 5 reverse lift. They are third with 73.57 points.

“In general, the short program was not bad, but we made one big mistake, therefore we are not so happy,” commented Morozov. “But we’ll keep going and working hard and come back with a new mindset tomorrow.”

Alexa Scimeca-Knierim and Chris Knierim showed a good triple twist, throw triple flip, and group 5 Axel lift, however, he put a hand down on the side-by-side triple toes and they lost a bit of unison on the change combination spin which was still graded a level 4. Despite the errors, the 2019 Nebelhorn Trophy silver medalist earned a new personal best of 71.28 for fourth place.

In their Grand Prix debut as a team, Canada’s Liubov Ilyushechkina and Charlie Bilodeau are in fifth with a personal best of 68.62 points. The 2019 Finlandia Trophy bronze medalists showed a good triple twist, throw triple Lutz, and level 4 spin, steps and lift. However, she stepped out and put a hand down on the side-by-side triple toes.

USA’s Jessica Calalang and Brian Johnson are in sixth with a personal best of 62.54, followed by Feiyao Tang and Yongchao Yang (62.35) of China and Canada’s Evelyn Walsh and Trennt Michaud (56.09).