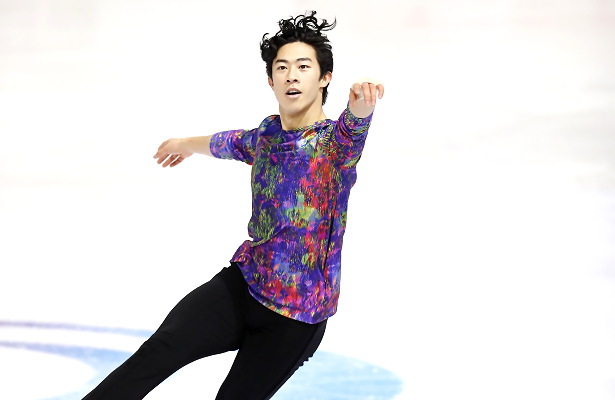 USA’s Nathan Chen defended his title at 2019 Internationaux de France with 32 points to spare on Saturday afternoon in Grenoble, and in doing so, secured a ticket to the Grand Prix Final in December. Alexander Samarin of Russia maintained second overall after the Free Skate and will compete again at Rostelecom Cup. France’s Kevin Aymoz finished third and will make his next Grand Prix appearance at NHK Trophy.

Chen wasn’t perfect in his routine to music from Rocketman, but he got the job done. The two-time World Champion hung on to his opening quad Lutz, but later stepped out of a quad Salchow and turned out the landing of a quad toe. Nevertheless, he also landed a strong quad toe-Euler-triple flip and two triple Axels, showing level 4 spins and footwork throughout. The 20-year-old scored 194.68 for a first-place finish in the free skate and overall (297.16), winning his sixth consecutive individual Grand Prix gold.

“I want to focus on being able to do the things I’m supposed to do,” added the the three-time U.S. Champion. “The judgement is what I can’t control. All I can control is how I step on the ice, how I skate, and how I do the program. Also, the expectation of the audience is something I can’t control either. What they want to see or what they don’t. Ultimately all these things are just easy distractions.”

Skating to “Good News” by Apashe, Samarin opened with a very strong quad Lutz-triple toe, but then fell on a quad flip and triple Lutz. The 2019 European silver medalist had some tight landings on a triple Axel and triple Lutz—both in combination-but showed level 4 spins and footwork throughout to score 166.62 points for third place in the free skate. However, with a total score of 265.10, he was able to maintain second overall.

“Overall, I am happy with the result,’ said the 21-year-old. “I won’t go into details now on what worked and what didn’t work, but I want to thank everyone for their support. My next event is the Grand Prix in Russia, at home. Now I’ll forget about this competition and start to prepare for the next one.”

Aymoz stepped out his opening quad toe, a quad toe-triple toe, a triple Lutz, but managed a total of five clean triple jumps, including two triple Axels, in his performance to “Lighthouse” by Patrick Watson. The 2019 Autumn Classic silver medalist showed good level 4 spins and footwork and finished second in the free skate with 172.14 points—a new personal best. With a total score of 254.64, he was able to maintain third overall to win the bronze, his first Grand Prix medal.

“I am really happy about my first Grand Prix medal at home,” said the 22-year-old. “It is good to have done it here. It was a good competition for me and a fight with me during my programs. I put all the energy I have into this competition. Figure skating for me is to share the emotion and to fight.”

Morisi Kvitelashvili of Georgia finished fourth overall (236.38). The  2019 Denis Ten Memorial Challenge gold medalist landed a quad Salchow-triple toe, but stepped out of a solo quad Salchow as well as a double toe-triple toe. He was otherwise clean, landing a five more triples and showing level 3 spins and level 2 footwork. He was awarded 157.59 for his routine to “Confessa” by Adriano Celentano.

USA’s Tomoki Hiwatashi, who stood in 10th after the short, finished fourth (158.73) in the free skate and moved up to fifth place overall (227.43).  The 2019 World Junior Champion had some tight landings, but landed a quad toe-triple toe, quad toe, six more triple jumps, and earned a level 4 on two spins.

Japan’s Shoma Uno struggled on most of his jumps, taking three falls to finish eighth overall (215.84).