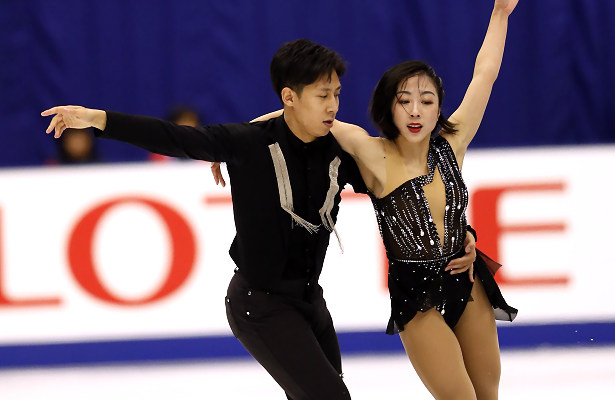 Wenjing Sui and Cong Han of China took a comfortable 10-point lead in the Pairs’ Short Program on Friday in Sapporo, Japan, at 2019 NHK Trophy. Kirsten Moore-Towers and Michael Marinaro of Canada are currently in second place followed by Anastasia Mishina and Aleksandr Galliamov of Russia.

Skating to “Blues Deluxe” by Joe Bonamassa, Sui and Han nailed their side-by-side triple toes followed by an excellent throw triple flip. The triple twist, steps, death spiral and lift were all graded a level 4, but the flying camel combination spin was not as clean and the team only received a level with negative grades of execution (GOE). Nevertheless, the 2018 Olympic silver medalists earned multitudes of positive GOEs on all other elements and scored a new personal best of 81.27.

“We are happy with today’s performance, but for the elements there are some issues, and we would like to review them before we go back to our country,” said Han. “We want to show our full performance tomorrow. The main reason or competing in Asia in the first half of the season was for time zone differences. It makes it easier for us to do adjustments.”

Canadian champions Moore-Towers and Marinaro had some unison problems on the change combination spin, but their throw triple loop was solid, as were the close and synchronized side-by-side triple toes. The 2019 Four Continents silver medalists also earned a level 4 on their group 5 Axel lift and footwork, and scored 71.21 points for their routine to “Love on the Brain.”

“We love skating in front of such a knowledgeable crowd,” said Moore-Towers. “We’re fairly pleased with our position heading into the long program.”

Mishina and Galliamov were off to a good start in their routine to “Je suis malade” performed by Lara Fabian, executing a level 4 triple twist and throw triple flip, however, Galliamov stepped out of the side-by-side triple Salchows. With the mistake forgotten, the 2019 World Junior champions rallied to produce a level 4 reverse lift, steps, flying camel combination spin, and death spiral to score 69.00 points.

“We’re basically happy about today’s performance, we saw a lot of positives,” said Mishina. “There were some negatives, but we are happy. We saw some unexpected mistakes that were totally unexpected. Once we return back to Russia, we want to make sure it never happens again. For tomorrow’s free program, we want to forget about the mistakes we made today and perform.”

Teammates Alisa Efimova and Alexander Korovin  are in fourth place with 64.94. The 2019 Winter Universiade champions showed a solid throw triple loop in their dramatic routine to “Carmina Burana,” and produced a level 4 lift and spin, however, Efimova turned out the landing and put a hand down on the side-by-side triple toes.

USA’s Alexa Scimeca-Knierim and Chris Knierim are in fifth with 63.63 points. The 2019 CS Nebelhorn Trophy silver medalists delivered a strong level 3 triple twist, however, he went down on the side-by-side triple toes and the back inside death spiral was declared invalid as there was no pivot point established.

The new Japanese team of Riku Miura and Ryuichi Kihara finished sixth (62.41) in their first outing together, while USA’s Tarah Kayne and Danny O’Shea and Nicole Della Monica and Matteo Guarise of Italy placed seventh (58.70) and eighth (57.55), respectively.