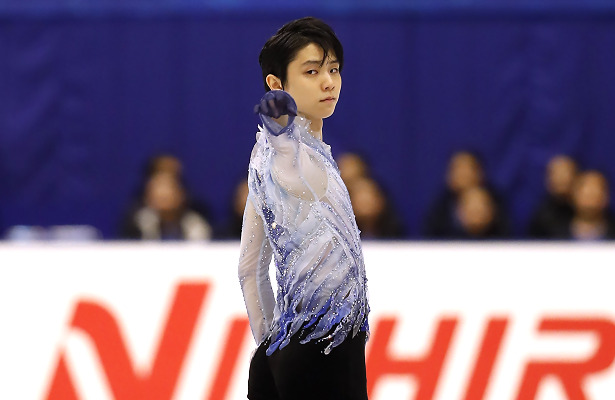 In his third appearance this season, front-runner Hanyu set the pace with his routine to Di Bladio’s “Otonal,” landing a quad Salchow, triple Axel and quad toe-triple toe right out the gate. His spins and footwork were all graded a level 4 and the 2019 World silver medalist earned many high positive grades of execution (GOE) for each element as well a “10” from four judges in the program components. His total score was 109.34.

“I think for myself, today was getting a passing grade,” said the 24-year-old. “It wasn’t my best performance. Tomorrow will be a different day, so I want to bring my best level of competition. I’m not thinking of changing anything in particular. I need to make sure I am fully concentrated. A lot of people talk to me about setting a new world record, but it’s not something I want to get caught up about. I want to fully enjoy tomorrow’s performance.”

When asked about his thoughts on Russian skaters, Hanyu recalled that that his third program was to “From Russia With Love” when he began skating.

“I like the style of Russian figure skating, the way it expresses the feelings, it’s very stoic,” he offered.

The 2019 World silver medalist went on to admit that he was relieved after his performance.

“Any time I do a good performance, I applause, and it’s become a habit for me,” said Hanyu. “I put my hand on my chest because I wanted to show that I took in all of the support and cheering in my heart. I was really trying to feel the music, no matter how nervous I am. I tell myself the music and emotions don’t change. When I think about the music, it makes it more difficult to do the jumps; I need to think at my own tempo.”

“I think when I feel weak or down, I am very weak, but people have an impression of me that I am a strong person,” he added. “Maybe that creates a huge pressure for me. Thanks to that pressure, I have a lot more pressure on me than anyone else. I want to show where I have a weakness, but I want to be strong.”

Skating to “The Question Of U” by Prince, Aymoz turned out the landing of his opening quad toe, but landed a triple Lutz-triple toe and a very solid triple Axel. The 2019 Internationaux de France bronze medalist also earned many positive GOEs on his level 4 spins and footwork to finish second with 91.47 points.

“I am really happy to be here in Japan,” said the 22-year-old. “Tomorrow I want to do my best and do a clean program.”

Voronov landed a quad toe-triple toe, triple Lutz and triple Axel in his routine to “Somebody to Love” by Queen. The defending silver medalist earned a level 4 on two spins and the footwork was graded a level 3 for a score of 88.63.

“I saw the other skaters today, and they were doing good performances,” noted the 32-year-old. “I was very satisfied of my own performance. As Yuzuru was saying, tomorrow is a new day and a new beginning. I want to put out a satisfactory performance and do really well at the NHK Trophy so I can stay in Japan and explore.”

Canada’s Roman Sadovsky turned out a triple Axel and triple Lutz, but landed a quad Salchow and showed very good level 4 spins and footwork in his skate to “Fly Me to the Moon”. The 2019 CS Finlandia Trophy bronze medalist is currently in fourth with 78.51 points.

Russia’s Makar Ignatov is in fifth with 78.47 points. The 2019 Rostelecom Cup bronze medalist landed a quad Salchow-triple toe and quad toe, but fell on a triple Axel.