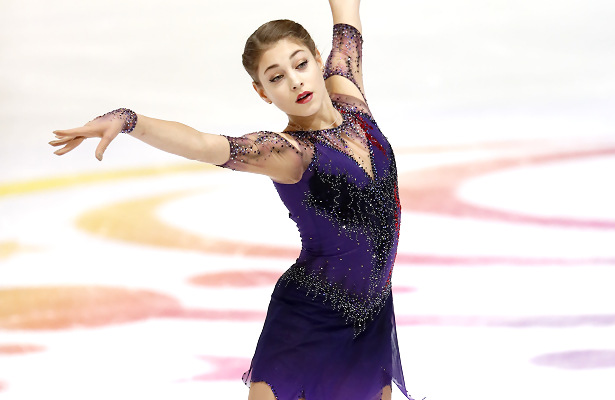 Kostornaia reeled off two strong triple Axels in her routine to music from the New Moon and Twilight soundtracks and Muse, one of which was in combination with a double toe. The 16-year-old was nearly perfect with the exception of an edge call on a triple flip, but otherwise landed a total of seven triple jumps and showed level 4 spins and footwork throughout, earning many positive grades of execution (GOE) along the way. She scored a total of 159.45 for first place in the Free Skate and 236.00 overall—both personal bests—to win the gold.

“I am pleased that I was able to skate well and to show a clean program,” said the 2018 World Junior silver medalist. “I hope to improve my jumps and my program with each competition and to perfect myself. I had a show number to this music and I liked it so much and we decided to use it for this season.”

Zagitova underrotated three jumps and received an edge call on a triple Lutz in her Middle-Eastern themed routine, however, the level 4 spins and footwork were graded a level 4 and racked up many positive GOEs. In fact, the 2019 World Champion earned the highest Program Components Score (PCS) of the group. She finished third in the Free Skate with 141.82 points, and while the mistakes were costly, she was able to hang on to second overall with a total score of 216.06.

“I think my performance was OK, but obviously there is room to grow and that motivates me,” said the 17-year-old. “I will try to improve in all aspects of my program, the spins, footwork and jumps and get more points on the GOE (Grade of Execution).”

Bell finished second in the Free Skate with a new personal best of 142.64 with her routine to “Hallelujah” by k.d. lang. The only major error was an underrotation on her solo triple Lutz, but the 2019 U.S. bronze medalist was otherwise solid, landing six clean triple jumps. She also  showed good level 4 spins and footwork,and with a total score of 212.89 (also a personal best), maintained third place overall.

“I’m really proud of how this competition went,” said the 23-year-old. “I think the season started very well for me. I really worked on my training and it’s paying off which I’m really excited about.”

“I’ve got Russia (Rostelecom Cup) coming up next, so I’m looking forward to just going in and bringing my programs out again,” she added.

Japan’s Kaori Sakamoto also underroated three jumps in her “Matrix” routine, but landed a clean triple flip-triple toe and showed level 4 spins and footwork to place fourth in the free skate (135.16). With a total score of  199.24, the 19-year-old rose from sixth to fourth overall (199.24).

USA’s Starr Andrews also struggled with several underrotations, but managed a clean triple toe-triple toe and level 4 spins and footwork to finish fifth (113.95) in the Free Skate and overall (180.54).

Wakaba Higuchi of Japan fell on a triple Lutz and made some mistakes on other jumps to place seventh in the free skate (109.34), slipping to sixth overall (174.12).