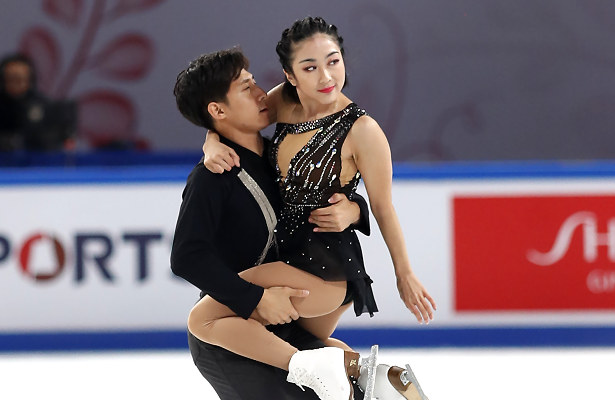 Wenjing Sui and Cong Han of China perform their Short Program at 2019 Cup of China.

In their first competition of the season, China’s Wenjing Sui and Cong Han are currently in first place after the Pairs’ Short Program took place on Friday night in Chongqing. Liubov Ilyushechkina and Charlie Bilodeau of Canada are in second, followed by Cheng Peng and Yang Jin of China.

World Champions Sui and Han were near flawless in their technically difficult routine to “Blues Deluxe” by Joe Bonamassa. The team landed solid side-by-side triple toes, a throw triple flip, and level 4 triple twist. They also executed a level 4 reverse lift and footwork, earning a new personal best of 80.90 points.

“It was a good performance,” said Han. “We skated like we do in training. This is our first competition of the season and we were a bit tight. That affected the quality of some of the elements.”

Ilyushechkina and Bilodeau showed a triple twist and throw triple flip, but the side-by-side triple toes were underrotated. Nevertheless, the 2019 Finlandia Trophy bronze medalists also produced a level 4 change combination spin, footwork and Axel lift to score a new personal best of 68.98 for their routine to “My Funny Valentine.”

“We really like the feeling we’ve developed for this short program and it was quite stable,” said Ilyushechkina. “There were some mistakes, but we got our lucky 68 (score), and it was a season’s best.”

Skating to “Alegria” by Cirque du Soleil, Peng fell on the side-by-side triple toes and there were some unison issues in the change combination spin, but the 2019 Skate America Champions otherwise showed a triple twist, throw triple loop and earned a level 4 on their reverse lift. They are currently in third place with 68.50 points.

“Except for the mistake on the jump, we are quite pleased,” said Jin. “I feel we have improved the performance aspect since our last Grand Prix. My partner got injured at Skate America and we have not practiced the jumps much.”

Nicole Della Monica and Matteo Guarise of Italy are currently in fourth (64.24). Both skaters fell on their side-by-side triple Salchows, but landed a triple twist and throw triple loop, and earned a level 4 on their Axel lift and footwork.

USA’s Tarah Kayne and Danny O’Shea, but they landed their side-by-side triple Salchows and throw triple loop, but left some points on the table with a level 2 triple twist and negative grades of execution (GOE) on their level 4 change combination spin.

Alisa Efimova and Alexander Korovin of Russia scored a new season’s best of 63.97 and are in sixth place, followed by China’s Feiyao Tang and Yongchao Yang (61.85) and Tae Ok Ryom and Ju Sik Kim of the Democratic People’s Republic of Korea (60.50).