After withdrawing from the last three consecutive championships, four-time national champion Yuzuru Hanyu is competing in Tokyo this year and is currently in first place after the Short Program. Three-time and defending champion Shoma Uno sits in second, while Shun Sato is currently third.

Hanyu was solid in his routine to “Otonal” by Raul di Blasio, landing an excellent quad Salchow, quad toe-triple toe and triple Axel. The 25-year-old skater from Sendai also earned a level 4 on all three spins and footwork, racking up many high positive grades of execution (GOE) on all elements along the way. He scored 110.72.

After a rough season thus far, Uno, who now trains under Stephane Lambiel, impressed with a solid quad flip, quad toe-double toe and triple Axel. All spins and footwork were graded a level 4 in his routine to “Great Spirit,” and the 22-year-old from Nagoya was awarded a score of 105.71.

Sato, fresh off a win from the 2019-20 Junior Grand Prix Final, put a foot down on the back end of a triple Lutz-triple toe, but otherwise produced a solid triple Axel and quad toe in his routine to “Arrivée des Camionneurs.” The 15-year-old sits in third with 82.68 points.

Keiji Tanaka is currently in fourth (80.90). The current bronze medalist underrotated, stepped out of and put a hand down on his quad Salchow (which was scored as a fall), but landed a triple Axel and triple Lutz-double toe in his fun routine to “Hip Hip Chin Chin.” The level 4 footwork was excellent and received a level 4 as did his final combination spin.

Koshiro Shimada is in a very close fifth with 80.59 points after his routine to “Stay.” The 18-year-old, who trains in Switzerland under Lambiel, landed a triple Axel and quad toe, but doubled the first jump in a triple Lutz-triple toe combination. 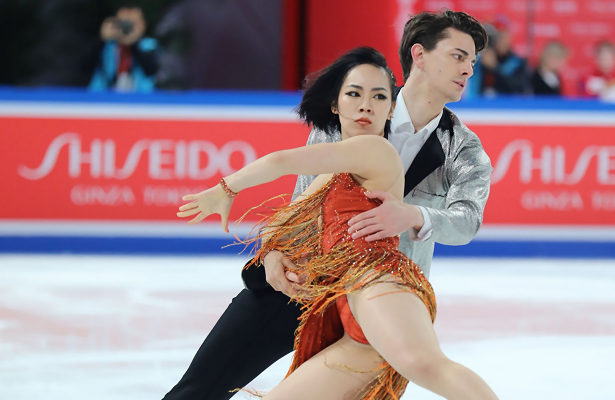