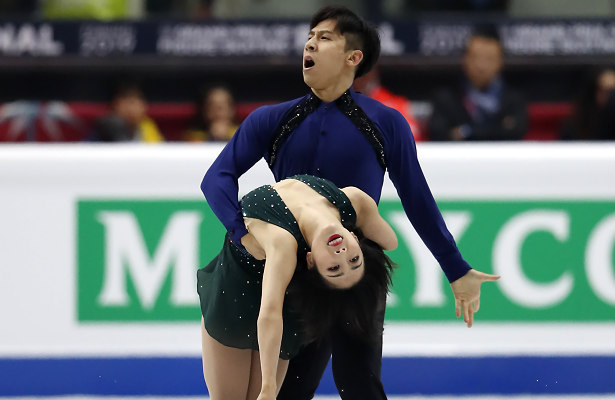 Sui and Han were by no means perfect, however, their mesmerizing routine to “Rain, In Your Black Eyes” featured a strong level 4 triple twist, throw triple Salchow, and throw triple flip. Han underrotated and stepped out of the back end of the triple toe-double toe combination and the second side-by-side Salchows were scored as doubles. The 2019 World and Four Continents champions still earned many high grades of execution (GOE) for their other elements and scored 134.19 for second place in the free skate, but won first place with a total score of 211.69.

“We had many problems, but we will work on that and make the program better,” said Sui. “Before coming here, we were quite nervous because we haven’t had the gold medal from Grand Prix Final yet. We were also a little exhausted because of the quick turnaround of the previous Grand Prix . We also had a lot of problems this time, like the levels and consistency for the jumps, but we will work on those in the future. We are also glad that the other Chinese pair did well and we were able to get gold and silver medals for China.”

“Its our first gold medal in the Final and I want to thank all the audience for their support,” added Han. “We know how hard the competition is.”

“Our gala program will be “Run” from the Olympics,” he added. “It means that the Olympics finished, but we want to keep running for the next Olympics. We are really thankful for all the people supporting us, the association, my family and my partner. It’s their support that made us to come to the stage we are right now. I had some injuries, and it affected my skates because of the change in my body, but it’s okay, they didn’t affect me that much.”

Peng and Jin were near solid in their routine to selections from Cloud Atlas, landing triple toe-double toes, a triple twist, throw triple loop, and throw triple Salchow. Like their teammates, their two lifts were graded a level 4 and the 2019 Four Continents bronze medalists won the free skate over Sui and Han by 0.41 points with a new season’s best of 134.19. With a total score of 204.27, they rose from fifth place to second overall.

“We decided to do the double Salchow partly because we wanted to skate a clean program and also that we weren’t able to practice for many days,” Jin explained about their opening jumps. “Peng’s foot also has an injury, so she’s been mostly doing protective recovery and we didn’t get to practice a lot of the jumps before coming here.”

“We felt relieved today,” said Peng, echoing what other competitors have been saying. “We didn’t think that much about the rankings, but just want to show the audience what we could do and perform our best. We lost the luggage and skates on our way here and we couldn’t practice for five days. We were actually ready for the worst. We bought new skates and also were thinking about wearing the new pair, but luckily they found them the day before the official competition.”

Skating to music from music from The Master and Margarita, Anastasia Mishina and Aleksandr Galliamov produced a good triple twist, throw triple flip, triple toes, and throw triple loop. The only mistake came when they underrotated the last jump in the triple Salchow-Euler-triple Salchows. Two lifts and the pair combo spin were graded a level 4 and the 2019 World Junior champions finished third in the free skate (131.65) and overall (203.13).

“We made mistakes which we didn’t expect to make,” said Galliamov. “It’s a good experience and we can make a conclusion from it. We cannot relax because all the pairs are strong and you must always be concentrating, especially at such serious competitions like this one. Bad times happen, but they don’t last forever. We will keep on working and hope to be stronger at Russian Nationals.”

Kirsten Moore-Towers and Michael Marinaro of Canada gave an emotional performance to “Carry You,” which featured a triple twist, triple Salchow-double toe-double toes, a throw triple loop, and level 4 lifts and spins. Unfortunately Marinaro had an uncharacteristic fall after he released Moore-Towers on the throw triple Salchow, which she double footed. The 2019 Four Continents silver medalist finished fourth (130.91) in the free skate and moved up one spot to fifth overall (197.99).

“I put my hand on her back and it went right through her zipper which has totally broken and then I went down,” Marinaro explained.

“We’re going to work with our choreographer next week, because we think our programs need a freshen-up,” she added. “We love them (the steps), but we need to make sure all the patterns are exact and that we’re performing them perfectly and then it’s a big push to Nationals.”

Russia’s Aleksandra Boikova and Dmitrii Kozlovskii, who stood in second after the short, had a disappointing free skate in which the last two jumps of triple toe-double toe-double toe were underrotated by Boikova. She also stepped out of the throw triple loop and the group 5 Axel Lasso lift was marred on the exit. Nevertheless, the triple Salchows were strong, as was the triple twist and first lift. The 2019 European bronze medalists finished fifth in the free skate (125.19) and slipped to fourth overall (201.84).

“The skate was really unsuccessful,” said Kozlovskii. “Of course we are not happy about the skate, but what can I do? It’s the sport. It happens and we will work hard to make sure it doesn’t happen again. It’s really hard to say right now what went wrong. There are too many emotions to tell what happened.”

Russia’s Daria Pavliuchenko and Denis Khodykin rounded out the group for sixth place in the free skate and overall (119.59 / 194.75). She took an unlucky fall while skating backwards and also fell on the throw triple flip. The catch on the triple twist was a bit messy, but the 2018 World Junior champions otherwise showed a throw triple loop and three level 4 lifts.

“At the beginning of the program, I wanted to do the element better than I can and fell,” said Pavliuchenko. “After that sudden moment, I began to feel nervous and made some stupid mistakes on other elements. It was a great experience and I hope it won’t happen again. I will work on it.”

“It is one of the variations of Tron (soundtrack),” explained Khodykin of the free skate. “I’m the man from the real world and Dasha is from the virtual one. I see her in the computer world, fall in love and try to call her with me to reality. So, the next part is our way from virtuality to the real world.”