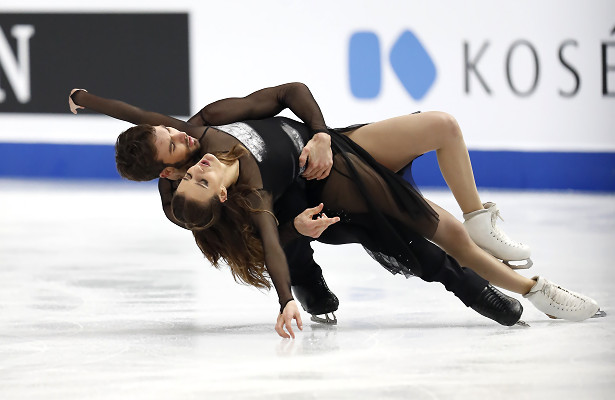 Gabriella Papadakis and Guillaume Cizeron of France perform their Free Dance at the 2019-20 Grand Prix Final.

Gabriella Papadakis and Guillaume Cizeron of France reclaimed their Grand Prix Final title in Torino, Italy, on Saturday after sitting out last year due to injury. USA’s Madison Chock and Evan Bates moved up one spot to take their third silver at this event, while teammates Madison Hubbell and Zachary Donohue pocketed the bronze. The judging panel for both the junior and senior ice dance disciplines were very strict.

Papadakis and Cizeron delivered an innovative routine to music by Olafur Arnalds and Forest Blakk in which all elements received mostly +4 and +5 grades of execution (GOE) across the board. The superior twizzles, lifts and spin were all graded a level 4 while the circular steps were a level 3. The 2018 Olympic silver medalists placed first in the free dance (136.02) and overall (219.85) to win their second gold at this event.

“We felt amazing tonight!” said Cizeron. “Seeing so many people watching in this historic rink, it was special. It was an amazing feeling. We’re just really proud of ourselves and our team. Our team (from the Montreal Ice Academy) got one, two and three today and it was a very special Final for us. We are really proud of our teammates here today.”

“It’s probably one of our best programs so far,” added Cizeron. “Regarding the programs, I don’t know how close we are to perfect, but I’m sure there are always things to improve. Our coach will probably go back to watch the details and have lots of comments on it. I think we will push ourselves a little more, and that’s what we’re going to do until the Worlds in Montreal.”

“We are really lucky that our teammates (from the Montreal Ice Academy) are really nice and genuine,” said Papadakis. “Sometimes we look at them on the ice and think, wow that’s amazing, we want to be better. So that really pushes us more to work harder.”

Chock and Bates earned a new personal best (129.01) for their exotic Egyptian Snake Dance routine. The 2019 Four Continents champions showed excellent level 4 twizzles, lift, and spin. The circular and one-foot steps were also very well done and received a level 3, and they scored a personal best total score of 210.68 for second overall.

“I think it went very well,” said Chock. “It was so fun! I was so present and enjoyed the skate so much.”

When asked why she felt that the program is so popular, Chock replied: “I think it’s the creativity and ingenuity of the choreography. It’s very different. There’s no other program like this in Ice Dance. It’s new and innovative and we take great pride in delivering it to the best of our abilities.”

Performing to selections from A Star is Born, Hubbell and Donohue also presented level 4 twizzles, lifts, and spin, however, the serpentine steps were graded a level 2. Nevertheless, all elements received many positive GOEs and the 2019 World bronze medalists earned a season’s best of 125.21 for the free skate and total score of  207.93.

“We’re feeling good,” said Hubbell. “Luckily, I have a very strong partner who kept me up during my little almost-slip before the twizzles. It’s a testament to how precise we’ve been training that I can slip a little bit, have a little moment where I catch my blade right before a twizzle sequence, and we can still do our twizzles.”

“We want to be fighting to be on the World podium and there’s a lot of competition, as you can see, so I don’t think anything changes after today, ” Hubbell said when asked about any possible changes to the routine. “We feel we have a much better program now than we did at the beginning of the Grand Prix series and we’ll just keep building on that. We changed nine of the elements after Skate Canada, so recently it’s just been about finally coming up with the composition. We were just making sure we would be able to come here and do a clean skate and get into our brain what we were actually doing. It was really all about focus. We were literally saying to each other every correction and every new part before we skated today because it’s so fresh.”

Alexandra Stepanova and Ivan Bukin of Russia were smooth in their sophisticated routine to “Primavera” and “Cry Me a River,”  however, he received a level 3 on the twizzles, while hers were a level 4. The spin and two lifts were graded a level 4, but the stationary lift received a level 3 and the one foot and diagonal steps were a level 2. The 2019 European silver medalists finished fifth (123.74) in the free dance, but fourth overall with a total score of 204.88.

“The difference between skaters was really small, so we were thrilled to skate here,”said Stepanova. “As for our feelings it was easy to skate. We didn’t get tired by the end of the program to fight for elements like it was at Skate America. The audience is amazing and so supportive that made us feel like at home. We don’t know what to say about our scores, because we didn’t this kind of score this season. We have to watch our skate with our coaches and figure out the reason for such low levels.”

“It was amazing to perform here and we want to thank everybody,” add her partner. “It’s difficult to comment on our points because we only had a quick look at them and saw quite low levels. We don’t yet understand the reason of it. We have to figure it out and work on.”

Canada’s Piper Gilles and Paul Poirier placed fourth (123.97) in the free dance and fifth overall (203.50) after their endearing performance to “Both Sides Now” by Joni Mitchell. The 2019 Four Continents bronze medalists both earned a level 4 on the twizzles, and the spin and lifts were also graded a level 4, while the diagonal and one foot steps were a level 3.

“We’ve got a strong Free Dance which we enjoy and we wanted to show that yesterday’s score did not define us,” said Gilles. “I think we did that and it’s a sign of our maturity and confidence.”

“I think we’re really pleased with that performance,” added Poirier. “We were a little discouraged being in sixth after the Rhythm Dance, but we wanted to go out today and show what we can do. These scores are a lot lower than we got at our Grand Prix events, so now we need to go back and review and try to raise the levels for the rest of the season.”

Last season at Skate Canada, a fan threw two flower crowns onto the ice for the team.

“We wore them in the Kiss and Cry and it became a thing and now we get them all the time,” explained Poirier. “We’re so grateful to our fans all round the world. It makes us feel we’re part of a family.”

Victoria Sinitsina and Nikita Katsalapov of Russia, who stood in fourth after the Rhythm Dance, gave a nostalgic routine to “Giorni: Andante by Ludovico Einaudi” and “Songs My Mother Taught Me,” which featured very good level 4 twizzles, however, the rotational lift was scored a level 3 and the combination spin a level 2. The panel also gave a one-point deduction for a “fall” in the choreographic slide. The 2019 World silver medalists finished sixth in the free dance (121.88) and overall (203.39).