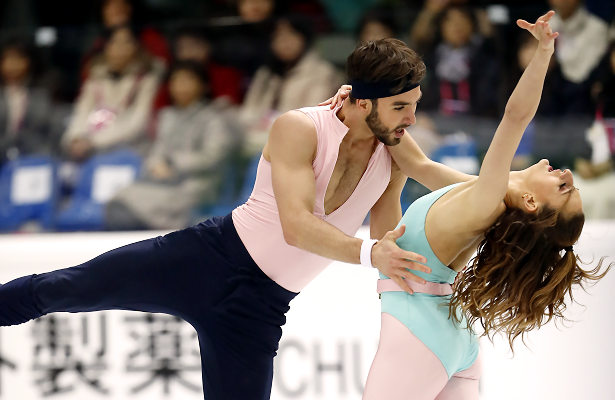 Gabriella Papadakis and Guillaume Cizeron of France perform their Rhythm Dance at the 2019-20 Grand Prix Final of Figure Skating.

Gabriella Papadakis and Guillaume Cizeron of France took their projected lead in the Rhythm Dance on Friday in Torino, Italy. USA’s Madison Hubbell and Zachary Donohue are close behind, followed by teammates Madison Chock and Evan Bates.

Papadakis and Cizeron showed superior level 4 twizzles and a stationary lift, while the Finnstep and Pattern Dance steps were graded a level three. Unfortunately, Papadakis had a slight stumble in the midline step sequence which resulted in a level 2. The 2018 Olympic silver medalists scored 83.83 points for their crowd-pleasing and crafty “Fame” routine.

“We had a couple of mistakes in the step sequence, which explains why we didn’t get that much of the scores, but we’ve had high scores in the previous Grand Prixes, and it’s fine,” said Papadakis. “We might just be tired from the last two Grand Prix competitions. We will do better tomorrow, to improve and be prepared.”

Cizeron agreed. “I think we are just a little tired, a lot of travels and stress. Especially, I think this is a pretty stressful competition. Only six pairs are here and only three can be on the podium. It’s pretty challenging, even just to qualify for the competition. The ice is very slippery, and there is always going to be something happening. I think Worlds in Montreal will be the highlight of the season. It’s our home and it’s where we live. It’s actually kind of stressful to compete at Worlds at home. We’re not very familiar with the venue, but our families and friend will come.”

Performing their theatrical “Marilyn Monroe” routine to “My Heart Belongs To Daddy” and “Let’s Be Bad,” Hubbell and Donohue produced very good level three Finnsteps, as well as a level 4 straightline lift. However, while earning many high grades of execution (GOE) for their midline steps, they only received a level 2. Like the French, the 2019 World bronze medalists met three out of four of the key points for the Finnsteps, but she received a level 3 on the twizzles, while he a level 4. They finished with 82.72 points.

“From a performance standpoint, I think it’s what we’ve been working towards,” said Donohue. “Being able to push through the whole program and not even think about fatigue, but just really being committed to the character, and more so than the character, being committed to performing with each other. There’s still some technical points left out on the table, which is a good thing. Being able to skate at that level, we know that it’s going to take drilling and narrowing down those few small technical things that I think we’re really starting to get a grasp on. So it’s just incorporating that into run-throughs and training so that at this level of performance, I think it will be pretty iconic.”

“I think once you get to the Grand Prix Final, there’s such a curated group of skaters it’s always going to be really close,” said Hubbell of the small point-gap between all the teams. “I think everyone skated really well, pretty strong performances from what I see, but it was a tough panel and not everyone got the levels they were hoping for. I think everybody at this stage of the game got here because we’re able to focus and keep our game plan going strong. It’s not affected by the short, so for all of us, we know exactly what we need to do in the free.”

Chock and Bates were smooth in their fun routine to “Too Darn Hot,” displaying level 4 twizzles and a lift. The 2019 Four Continents champions also met three of their key points in their level 3 Finnsteps, however, the pattern steps for her were graded a level 2 while he received a level 3. The diagonal steps were also graded a level 2 and the team sits in third with 81.67 points.

“It’s fun!” said Chock of the program. “It takes a lot of energy, but once we get into it, it gives us more energy to perform it. That’s a real upside to the song—it’s so energetic and we feed off that.”

“It feels great to be at this event,” said Bates. “It’s such a prestigious event, arguably the most prestigious of the whole season in a non-Olympic year, and it’s just wonderful to be here among the best in the world. We’ve had a great season thus far. We’ll have to look at the protocols to see where we can get some more points, but overall, we’re happy with how we skated.”

Russia’s Victoria Sinitsina and Nikita Katsalapov are in a very close fourth with 81.51 points. The 2019 World silver medalists put out a good routine to “Singin’ In the Rain,” which was highlighed by their strong level 4 twizzles and rotational lift.

“As for our feelings and impressions, we were skating really well, we enjoyed it so much,” said Katsalapov. “I made a mistake on the twizzles and realized that level would be definitely reduced. But looking at the points and levels, it seems that everything was bad. This misunderstanding makes us upset of course. We controlled every element, skated easily, this mistake is just an accident. Tomorrow we will do our best and try to make judges not doubt in our skating.”

“The atmosphere here is very competitive,” added Sinitsina. “Even on practices, we feel that everyone is competing here. It motivates us a lot. A lot of Russian flags here were a big and very pleasant surprise for us.”

“We are pleased with our performance today,” said Bukin. “During the last week after NHK, we were working on the tiny mistakes we made the previous competitions and here, we finally managed to skate without them. The reaction of the audience was great. They made us understand that we skated really well and we want to say thanks a lot to the audience and spectators. It is really important for us.

“Our coaches praised us a lot,” added Stepanova. “They said that we were skating with good speed and emotions. It is really important for us, because only coaches know what we really can do.”

When asked about the kiss in the program, she said: “It’s just choreography. If you put such scenes into your program, they must be as natural as they can, like in movies or theatre. We thought that many skaters would take “Moulin Rouge,” but finally we decided to take it and get a bright and interesting choreography for which we send many thanks to Ilia Averbukh.”

Piper Gilles and Paul Poirier of Canada are currently in sixth (79.53). Their “Mack and Mabel” routine featured level 4 twizzles and rotational lift.

“It was good, but we’re a bit disappointed with the score,” said Gilles. “We skated really well and we had the best energy level we’ve had in this program. And skating here on Olympic ice is a special moment.”

“We felt it was a good performance, but it was a lower technical score than we’ve had in our other Grand Prix events, especially in the rhythm dance,” noted Poirier. “So we’ll have to go away and review it. Overall, it’s a bit disappointing.”

“Our image was a classic Broadway program with a vintage Broadway feel,” he added, regarding the music to “Mack and Mabel. “It’s also a homage to a classic ice dance program from Torvill and Dean in 1982. But now, we can have lyrics. We put our own spin on it with a fresh feel.”