Surprises were in abundance at the 2019-20 Japanese Figure Skating Championships on Saturday night in Tokyo, Japan. Rika Kihira maintained her overnight lead to win her first national title, while Wakaba Higuchi rose from fourth to claim the silver and Tomoe Kawabata from soared from seventh to take the bronze.

Kihira landed a total of six clean triple jumps in her “International Angel of Peace” routine, including two triple Axels. The only mistake came when she underrotated the back end of a triple Axel-triple toe. The 2019-20 Grand Prix Finalist also earned a level 4 on all spins and footwork as well as positive grades of execution (GOE) on all elements. She finished first in the free skate (155.22) and overall (229.20).

Higuchi stepped out a triple flip, which also received an edge call, but was otherwise near perfect in her performance to selections from Vicente Amigo. The 18-year-old showed very strong level 4 footwork while landing a total of six solid triples, including a triple Lutz-triple toe and triple Lutz-double toe-double loop. She placed second in the free skate (138.51) and overall with a total score of 206.61.

Skating to “Yumeji’s Theme” and “Sikuriadas,” Kawabata landed a triple Lutz-triple toe as well as four more clean triples while showing two level 4 spins, but underrotated a triple flip and the third jump in a double Axel-double toe-double loop combination. Nevertheless, the 17-year-old, who was 10th last year, placed third (128.43) in the free skate and overall (193.96).

Satoko Miyahara, who stood in second after the short, finished sixth (121.32) after her free skate to Schindler’s List. The four-time national champion underrotated nearly all of her jumps with the exception of a double Axel. With a total score of 191.43, she slipped to fourth place overall.

Yuhana Yokoi, who stood in 9th after the short, finished fourth (128.02) in the free skate and fifth overall (190.92). The 2018-19 junior champion turned out both triple Lutzes, underrotated a triple loop, and received an edge call on a triple flip, but landed a strong double Axel, triple Salchow-triple toe and two level 4 spins in her performance to music from The Phantom of the Opera.

Kaori Sakamoto slipped from third to sixth overall (188.26) after finishing seventh in the free skate (118.31). Last year’s champion struggled with underrotations throughout her routine to The Matrix and fell on a double Axel-triple toe.

Selections for the upcoming ISU Championships events are as follows: 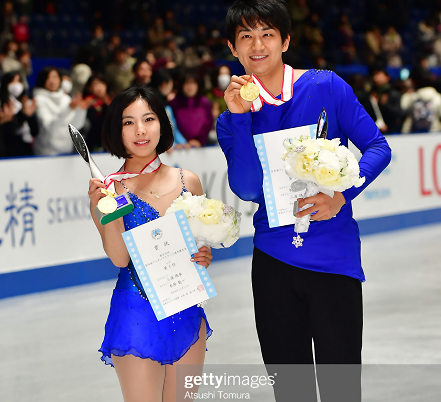 Riku Miura and Ryuichi Kihara are the only pairs team competing at this event this season. They scored 116.16 in the free skate and finished first with a total score of 170.11. They will represent Japan at both Four Continents and Worlds.