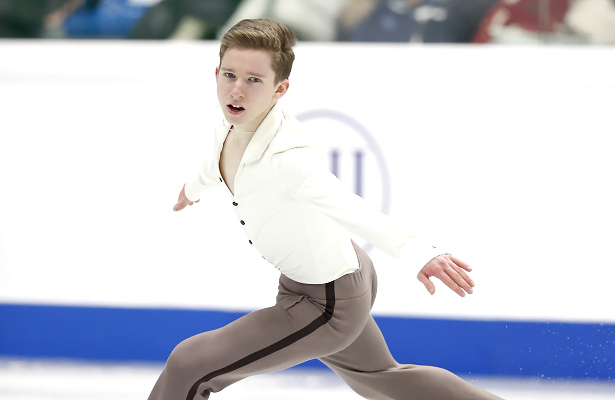 Andrei Mozalev of Russia took first place in the Men’s Short Program in Torino, Italy, on Thursday afternoon in his debut at the Final. Teammate Daniil Samsonov is currently in second, followed by Japan’s Shun Sato.

Mozalev was near perfect in his powerful and dynamic routine to Juno and Avos by Alexei Rybnikovz, landing a triple loop, triple Axel a triple Lutz-triple toe. All jumps received positive grades of execution (GOE) as did his two spins. The footwork was level 3, but still strong, and the 16-year-old from St. Petersburg scored 82.45 points.

“I feel very comfortable here at the Final,” said Mozalev, who was the only junior man to win both his Junior Grand Prix (JGP) events. “It is great to be here. The audience is great and supportive. I was a bit nervous. I am happy with my skate, but there is always something that could be better. There is no limit to perfection.”

Samsonov took a fall on a triple Axel in his routine to “Rain, In You Black Eyes,” but the 14-year-old from Moscow was otherwise solid and showed good technique and maturity in his basic skating skills. The JGP Baltic Cup champion otherwise landed a solid triple loop and triple Lutz-triple toe, and displayed level 4 spins and footwork while racking up high grades of execution (GOE). He scored 77.75 points.

“I’m as happy as I can be considering the fall,” he said. ” I tried to keep going and not lose too many points, but just continue to the next elements. I wasn’t nervous skating first—I like to skate first because you are warmed up already and ready to go. I was just a bit nervous to be skating in such a big competition in such a big arena with so many people. But, when you have a lot of people, you have a lot of support too.”

Skating to “Arrivee des Comionneurs” by Michel Legrand, Sato landed his triple Axel as well as triple Lutz-triple toe and triple loop, showing good focus throughout. The JGP Lake Placid gold medalist only earned a level 2 on his footwork and camel spin, but the other two spins were graded a level 4 and he finished a very close third with 77.25 points.

“I’m satisfied with my performance today,” said the 15-year-old from Saitama. “I think I did eighty percent comparing to perfection. I would like to get a medal, but first I need to do my best and stay calm and concentrated.”

Still adapting to his new adapting to new size and height, Russia’s Petr Gumennik took a fall on his opening triple Axel, but otherwise landed a triple loop and triple Lutz-triple toe in his routine to “Je me souviens de nous” by Maxime Rodriguez. The defending silver medalist also earned a level 4 on all spins and footwork to score 72.16 for fourth place.

“I didn’t figure out yet what’s happened with my triple Axel, but here on practices, I was always making mistakes on it,” said the 17-year-old from St. Petersburg. “I feel sorry about it because in general, except for this element, everything was fine. Maybe it would be one of my best performances. I hope that in free skating I will do it well. My coach was pleased in general and said that everything will be clear in the free skating. I’m planning to do a quad Lutz, quad Salchow, triple Axel and two triple-triple combinations.”

“Actually I didn’t change a lot,” said the 2019 CS Warsaw Cup silver medalist when asked about any new changes since his two grand Prix events. “We just added some new steps. I don’t feel that I’ve changed although many people say that I grew up a lot.”

Daniel Grassl of Italy missed a pick on the back end of a triple Lutz-triple toe, resulting in single toe. The 2019 World bronze medalist, who has recently been dealing with boot problems, otherwise landed a triple Axel and triple toe.  Two spins, as well as footwork, were graded a level 4 and he sits in fifth with 71.95 after his lyrical routine to “Lacrimosa” from “Requiem” by Mozart.

Japan’s Yuma Kagiyama is in sixth place with 71.19 points. The JGP Courchevel gold medalist underrotated and stepped out of his opening triple Axel and received an edge call on a triple Lutz (in combination with a triple toe).

“I am not satisfied with my program today,” said the 16-year-old from Yokohama. “I didn’t do my Axel and that makes me unhappy. I was really nervous. Usually I enjoy the pressure and can control my nerves, but today I could not. This is my first Grand Prix Final and there are a lot of spectators and I could not control my nerves. But on Saturday, I will set aside today and focus on the Free Program.”