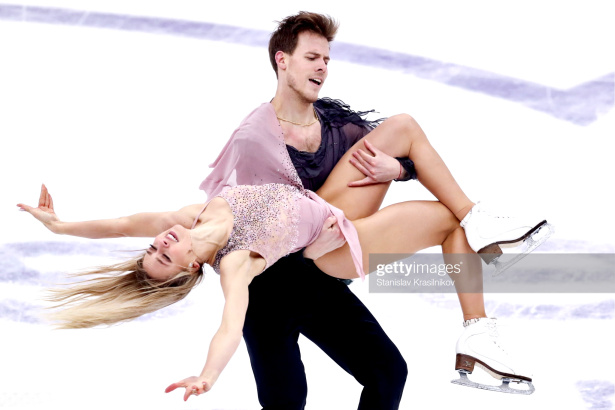 Victoria Sinitsina and Nikita Katsalapov perform their Free Dance to “I Giorni” and “Songs My Mother Taught Me.”

Victoria Sinitsina and Nikita Katsalapov clinched their second national title, but it was a close call with Alexandra Stepanova and Ivan Bukin winning the Free Dance. Tiffani Zagorski and Jonathan Guerreiro returned to the podium and reclaimed the bronze they won two years ago.

Sinitsina and Katsalapov had drawn to skate last and put out an emotional and elegant performance to “Songs My Mother Taught Me” by Antonin Dvorak. The 2019 World silver medalists collected a level four for the twizzles, the lifts and the combination spin, while the one foot step sequence merited a level four for her and a level three for him. The serpentine step sequence was a level three as well. The ISU Grand Prix (GP) Finalists scored 132.31 points, just losing the Free Dance portion to Stepanova and Bukin, and accumulated 220.74 points overall.

“Two and a half weeks ago, at the GP Final, we skated with more ease,” said Katsalapov. “Today, we were very focused and controlled. We’re pleased that we executed everything we’ve worked on since the Final and the score is good. There is a lot of work ahead, we want to improve the free dance a lot. We’ll have only two days off– the 31st and the 1st.”

Stepanova and Bukin’s dance to “Primavera” and “Cry Me a River” was highlighted by difficult twizzles, and lifts. The 2019 European silver medalists earned the same technical base value as Sinitsina and Katsalapov, however, they collected a little more on the grades of execution (GOE) to win the Free Dance by 0.28 points (132.59). It was not enough to overtake the leaders, though, and the Muscovites remained in second place at 219.72 points overall to claim their fourth consecutive silver medal at Nationals.

“Russian Nationals is always tense, it is the last competition of the first half of the season,” acknowledged Stepanova. “There was less emotion, we focused on each step and wanted to skate clean. We wanted to improve the technical mistakes we made at the GP Final and where we lost points. We wanted to lift our technical score here and we’re happy with what we did.”

Zagorski and Guerreiro put out a dramatic dance to “Survivor” (cover version by 2Wei) and collected a level four for all elements except for the diagonal step sequence that was rated a level three. The Muscovites scored 120.35 points which added up to 197.73 overall. A year ago, they had slipped from third to seventh after an error-ridden Free Dance when his laces had become undone.

“It (returning on to the podium) is very uplifting,” Guerreiro shared. “I think it’s a sense of relief. We wanted it and we took it step by step. We said to ourselves at this given time it’s not about the world’s best free dance run through, lights out, it’s about doing what we need to do to get to Europeans and doing it with class, hopefully. I think we managed to have a balance with that. We skated well, technically, and we have the highest base value of the competition, which is nice to know.”

“It feels great,” added Zagorski, who earlier this season lost training time due to a meniscus injury. “Before this competition, we actually got in training. We had a good two and a half weeks of training, so hopefully, going into Europeans, we’ll add more and it will be much better.”

Coach Nikolai Morozov’s daughter Annabelle and Andrei Bagin pulled up from fifth to fourth with their romantic dance “Terra Rossa” by Havasi. Five elements were rated a level four, but the footwork garnered only a level two. The Golden Spin of Zagreb silver medalists earned 115.43 points and had 189.10 points overall.

2018 World Junior Champions Anastasia Skoptcova and Kirill Aleshin slipped from fourth to fifth with their dance to “Fifty Shades of Grey” on 186.81 points while Sofia Shevchenko and Igor Eremenko pulled up from seventh to sixth at 181.67 points.