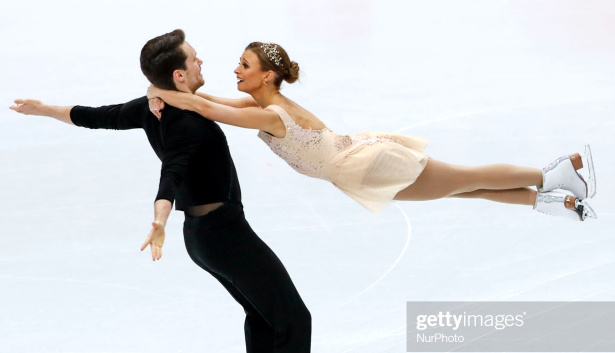 Kirsten Moore-Towers and Michael Marinaro perform their Free Skate to “Carry You” by Ruelle.

Kirsten Moore-Towers and Michael Marinaro secured their second Canadian national figure skating championship with a soulful performance set to “Carry You” by Ruelle. The 2019 Skate Canada International and NHK Trophy silver medalists delivered a throw triple Salchow, throw triple loop and side-by-side triple Salchows to earn a free skate score of 141.94 and total competition score of 215.67. Their only mistake came when Moore-Towers singled the the first jump on a triple Salchow-double toe-double toe.

“It was difficult,” said Moore-Towers of the skate, particularly following Liubov Ilyushechkina and Charlie Bilodeau who generated a lower-than-expected score. “You never know what to plan for. We had a lot of different scenarios and it’s difficult to hear a score before you skate and then to go out and deliver. We were planning on sort of the opposite scenario, hearing a really, really big score and having to kind of compete to it and it’s not easier to hear a lower score than you anticipated, because now the focus becomes not losing instead of pushing for it.”

“I just got a little but too excited on the first jumping pass which was a big bummer for me,” she said of the abandoned triple toe. “My jumps are usually very solid, so this has been a funny couple of days, but I was proud of the recovery from the second element. That’s not always easy to do. It’s easier to ride a wave. It’s a little bit harder to have a disappointment on an element and come back stronger. So, I was definitely proud of that, but of course would have liked a perfect program.”

“Our goal here was obviously to solidify ourselves as the number one Canadian team, so we are thrilled to have done that in a year when the competition is a little steeper,” shared Moore-Towers. “Last year, for our first title together, the field was a little bit more open. Of course, there are great teams in Canada always, but this year, it was a little bit more difficult, so that obviously was playing on our minds a bit. You never want to focus too much on the other competitors and the results, but of course it is inevitable.”

“We have some big, big goals this season so this weekend, I think it was bigger than getting the gold medal,” added Marinaro. “We needed to put down some skates that we could feel comfortable with and move forward with. It is still not perfect, but it was definitely in the right step. A couple things we have been working on we were successful with. We were a little but slow and tight out there today. Obviously, on the world stage, we are going to have to bring a bigger skate and bigger performance than we did today, but we are heading there.”

Evelyn Walsh and Trennt Michaud electrified the Mississauga audience with their energetic routine to “One” by Cinematic Pop to win another silver medal at the national championships. The poignant skate included a throw triple loop and throw triple toe, however, the judges made an underrotation call on the side by side jumps. They finished with a free program score of 125.95 for a competition score of 196.29.

“We really enjoyed it,” Michaud said of the performance. “The crowd was awesome here and they have been awesome all week. This is only a couple hours from home for both of us, so there are tons of family here and also friends and family of all our skating friends, so it’s kind of a big happy skating family.”

“There are so many positives we can take out of this,” Walsh added. “This is the peak, I think, of our season so far and this is exactly where we wanted to be at this point.”

“Everything happens for a reason,” Michaud added, referring to their disappointing Grand Prix series performances this season. “We firmly believe in that, so all the lows you, you kind of have to have them to kind of keep pushing through. We just want to build off of this for, hopefully, Four Continents, and see what happens from there.”

“Nationals has a different kind of feel to it,” Walsh said of their success and comfort in Mississauga. “I don’t know if it’s our family here, but all the competitors are our best friends and we love seeing them all and it’s a real family. All of our national team members so, I don’t know, we just love this event.”

Liubov Ilyushechkina and Charlie Bilodeau  struggled to maintain their second-place standing after the short program with a free skate replete with errors including falls on the throw triple flip and loop. Ilyushechkina also squeaked out her side-by-side jumps, with underrotation calls on both the triple toe and triple Salchow. Despite the botches, the new team executed two impressive level four lifts, showcasing Ilyushechkina’s flexibility in their routine to “Je Voudrais Voir Le Mer” by Michel Rivard. They scored 115.48 points in the free skate to finish the competition with a score of 186.71 and win the bronze medals.

“Very dissatisfied,” said Ilyushechkina of the performance. “It is not what we were hoping to do. Some things at the beginning were smoother. The second half of the program was not up to our standards. It was one blended set of errors. We need to calm down, think backwards and analyze it. It will be one more experience and another step forward.”

“The short program was a good one for us, obviously, but after this, the long program was a counter performance and it happens sometimes,” said Bilodeau. “But sadly, it happened here at nationals, so we are disappointed with this, but we are looking forward to the next one.”

Justine Brasseur and Mar Bardei finished fourth with a total competition score of 177.06 followed by Lori-Ann Matte and Thierry Ferland (175.28).