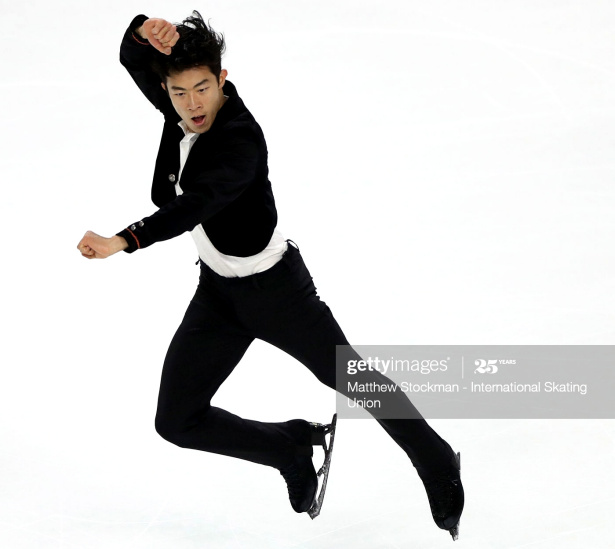 Chen earned a sensational score of 111.17 after his tango program to music from the Desperado soundtrack. The two-time World champion reeled off a quad toe-triple toe, triple Axel, and quad flip—all of which garnered positive Grades of Execution (GOE) while displaying level four footwork and spins.

“Speaking for all the skaters, I think we are really fortunate to have an opportunity like this,” he added. “It’s something that we didn’t really expect to happen, but Orleans (the venue), US Figure Skating, and the ISU did so much to make this happen and I think we are all very grateful.”

The style of the new Short Program is new to Chen and he feels there is still a lot work and improvement to be done. While he’s had dance classes for the other styles he’s used in the past, this one is different.

“I’ve never had any experience with this style,” he said. “It’s new to me, but that being said, although this program is oriented in Latin-American music as well as Spanish music, I’m not necessarily trying to hit the identical movements of those cultural movements or dance. I’m trying to bring out the character of the movie which I draw inspiration from. Of course, the beginning of the section isn’t from Desperado. We are trying to utilize that as an introductory piece.”

Performing to Josh Groban’s rendition of “Vincent (Starry Starry Night),” Zhou landed a quad Lutz-triple toe and triple Axel, but the quad Salchow was just a tad underrotated. The change foot sit spin was graded a level 3, as was the change combination spin, but the 2019 World bronze medalist earned a level 4 on the footwork and Flying Camel spin.

“Honestly, it didn’t feel any different from a major competition with a live audience,” said the 20-year-old, who echoed Chen’s comments on the event taking place. “It felt completely normal and I think that’s a testament to how well US Figure Skating has set up this event. Everything came together very well to get to this point.”

Zhou returned to Colorado Spring to train under Christy Krall and Mie Hamada after parting ways with Lee Barkell. Part of the reason was due to COVID and the restrictions that it had with him training in Toronto.

“We had a nice phone call and there is a mutual understanding on both sides,” explained the skater, adding that they are still on good terms. I’m really grateful for the time I had with him and he taught me some great things, but now I’m back to Colorado Springs which is the best decision given the circumstances.”

Zhou, who took a hard fall in practice this morning, admitted to having his share of ups and downs in the past few weeks in regards to practice. Overall, however, the skater felt he did a great job, especially with the components.

“I put in a solid block of training a week prior to coming here,” he said. “After getting here, I’ve been trying to find my groove, to find my center of balance, and it has felt a little off sometimes. That does definitely shake up your confidence a little; definitely a little nerve-shaking. I got up off the ice and wasn’t in the best state of mind, but I took a nap and slept it off. I went out there and overcame my doubts and am really proud of myself.”

Messing kept his Short Program from last season to “Perfect” by Ed Sheeran. The  2019 Autumn Classic International bronze medalist put a hand down  after the first jump in a quad toe-triple toe, but showed a very good triple Axel and triple Lutz. Two spins were graded a level 4, while the footwork was a level 3. He sits in third with 92.40 points.

“I’m just stoked that we were able to have a competition here!” said the 28-year-old. “I gotta say I was very nervous going out here. It was very much welcomed. I didn’t realize how much I missed having the butterflies in my stomach. I’m so thankful for US Figure Skating for pushing through and making this happen for us. I felt like it was something we all really needed.”

Messing went on to say how safe he felt at the event given the circumstances.

“The dining environment, the warm-up area, everything feels very safe,” he said. “I’m just very thankful for that. I’m happy to be here and happy to be able to represent.”

Heading into the free skate, Keegan hopes to “get the virtual crowd as riled up” as he can.

USA’s Tomoki Hiwatashi performed to “Standards” by Leslie Odom Jr., opening with a strong quad toe. He fought a bit for the landing on a triple Axel, but the triple Lutz-triple toe was good. He sits in fourth with 87.17 points.

“To be honest, I’m not completely happy with what I did because of the points I’ll be losing on my spins and also the iffy triple Axel that was a little bit shaky,” said the 2019 World Junior champion. “I did feel like other than that everything was fine. I think it was a good start for this season. With the program itself, I’m really not too happy about it, but I’m pleased to have this kind of start.”

Alexei Krasnozhon is currently fifth (78.06). His routine featured a solid quad loop and triple Axel. Israel’s Alexei Bychenko is in sixth (77.48), followed by USA’s Ilia Malinin (76.75) who is making his Grand Prix debut.